It took until about 5 p.m. on the final day of the regular season before the Yankees' pairing with the Twins in the American League Division Series became set in stone. As the Wild Card, the Yanks must face the division winner with the best record not in their own division, and that's the Twins, who at 94-68 finished with one fewer win. Though they swept the Twins in the first round last year en route to their 27th world championship, this is no easy draw for the Yankees.

Neither team is slated to make any formal announcements today regarding their official 25-man rosters, which don't need to be submitted to Major League Baseball until Wednesday morning, and the Yankees haven't even announced their rotation. So as we twiddle our thumbs and wait for word while preparing more in-depth breakdowns, I wanted to spotlight one key decision facing each manager. 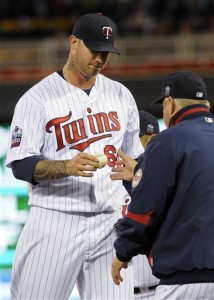 Jon Rauch's availability is a key concern for the Twins (AP).

Twins: Rauch Rumble
The Twins clinched the AL Central flag back on September 21, giving manager Ron Gardenhire plenty of time to lay out his postseason rotation. They plan to go four deep, with ace lefty Francisco Liriano starting Game One, old nemesis Carl Pavano going in Game Two, southpaw Brian Duensing set for Game Three, and righty Nick Blackburn for Game Four. Kevin Slowey, who went 13-6 with a swollen 4.45 ERA while making 28 starts for the Twins, is apparently slated for long relief work, which leaves one spot open in the team's seven-man bullpen.

Option number one is Jon Rauch. The 6-foot-11 righty with the neck tattoos — whose presence makes it appear as though some circus sideshow is missing its freak — spent the first half of the season as the team's closer, filling in for Joe Nathan, the all-world hurler who underwent Tommy John surgery in late March and missed the entire season. Though he's not blessed with overpowering stuff — his fastball tops out in the low 90s — Rauch didn't do a bad job as the closer, converting 20 out of 24 save opportunities before the All-Star break with a 2.38 ERA and a tidy 25/5 K/BB ratio in 34 innings. He got knocked around a bit in mid-July, and by the end of the month the team traded for the Nationals' Matt Capps, who assumed closer duty and bumped Rauch into a setup role, where he remained quite effective.

Nonetheless, Rauch hasn't pitched since September 26; last Thursday, he had fluid drained from his left knee and received a cortisone shot. For what it's worth, one of my Baseball Prospectus colleagues was at Target Field on a press pass this weekend, where Rauch all but guaranteed he'd be good to go; he's slated to throw a bullpen session later today to sell that proposition to the Twins' brass. If he can't go, the spot may go to righty Scott Baker, who went 12-9 with a 4.49 ERA while making 29 starts. Baker's been a mainstay of the Twins' rotation over the past few years, but he's been battling elbow tendonitis, and needed two cortisone shots himself to get through the season. He didn't pitch between a two-inning stint against the Tigers on September 2 and a five-inning stint against the Indians on September 21, and made just one more start on September 28, striking out nine Royals in five innings. There's still some concern that he may not be able to get his elbow loose fast enough to be a useful component out of the bullpen, so the third option for that spot is journeyman lefty Glen Perkins, who spent most of the season getting knocked around at Triple-A Rochester and put up a 5.82 ERA in just 13 appearances (one start) with the big club.

Yankees: The New Number Two
With opponents and venues hanging in the balance until the final out on Sunday, the Yankees haven't even gotten to set their rotation. CC Sabathia is the obvious choice to start Game One, and the spaced-out schedule means he could go on three days' rest in Game Four, a likelihood if the Yankees are trailing 2-1 and would otherwise have to put their fates in the hands of the unpalatably erratic A.J. Burnett. The bigger decision is who starts Game Two, Andy Pettitte or Phil Hughes.

While he's more Clydesdale than Thoroughbred, Pettitte is the most experienced postseason starter around. Thanks to the three-tiered playoff format, the 38-year-old lefty holds the all-time record for postseason starts (40), innings (249), and wins (18). He started in the clinching game of all three rounds last year, pitching well enough for the team to win. He'd normally be an obvious choice to start Game Two and to return on four days' rest for a decisive Game Five, but after missing two months due to a groin strand and totaling just 13.1 innings of uneven performance over three late-season starts (22 hits, 10 earned runs), he's a shakier proposition than he's been in the past, particularly given that he's maxed out at 88 pitches. If Sabathia returns for a potential Game Four on three days' rest, the Game Two starter can return for a Game Five on four days' rest, something Pettitte has done just once since July 8.

Hughes has never started a postseason game, though he saw plenty of postseason relief duty in 2007 and last fall. By now, the arc of his 2010 season is a familiar one: a 3.17 ERA with eight quality starts out of 13 through June 19, in large part because of favorable luck on fly balls. Via FanGraphs' game log data, he yielded just seven homers out of 103 flies, a rate of 6.8 percent, around half the league average; on a per-nine basis, he yielded 0.8 homers. Since that point, which coincided with the Yankees' first move to moderate his innings total via a skipped turn, he's put up a 5.07 ERA with seven quality starts out of 16, along with two spotless innings of relief. His HR/FB rate nearly doubled to 12.4 percent, and his HR/9 more than doubled to 1.7.

Hughes posted a higher ERA at home by more than a run (4.66 to 3.47) even with a considerable imbalance on BABIP (.262 at home, .293 on the road). As the most flyball-oriented of the Yankees' starters, he's a rough fit with Yankee Stadium, where more homers were hit on a per-game basis than in any other park besides Toronto (1.38 per team per game). Twenty of his 25 homers allowed came at home, with similar splits to those of his bifurcated season: 12.7 percent of flies, and 1.7 per nine. On the road, where he threw just 40 percent of his innings, his rate shrank to 5.6 percent of flies, and 0.6 per nine. In spacious Target Field, where homers were hit at the majors' fourth-lowest rate, just 0.71 homers per team per game, his flyball tendency shouldn't be a major issue — and both of his starts would be made there. Furthermore, he's been worked on four days' rest for four of his six latest appearances dating back to the beginning of September, though two of them were the relief appearances.

This shouldn't be a tough call for Joe Girardi, but it's one he's going to take his time to announce officially. Bet on Hughes.