The Twins Are a Funny Proposition After All

Share All sharing options for: The Twins Are a Funny Proposition After All 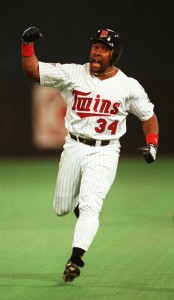 Despite the Red Sox doing their best to help the Yankees to the division title, the defending world champs will go into this postseason as the wild card. As such, we will next see Derek Jeter and pals taking their turn at bat in the top of the first inning at Target Field in Minnesota.

This is a fascinating matchup in many ways, and Cliff, Jay, and I will be previewing the collision between these two teams beginning today. Cliff will be handling most of the head-to-head stuff, but there are a couple of factors that seem kind of interesting and somewhat shocking when contemplating who gets bragging rights at each position:

Shortstop: Even though Derek Jeter had a little hot streak that allowed him to finish the season with a .270/.340/.370 average, would you pick him as the dominant shortstop of this season? J.J. Hardy finished at .268/.320/.394, so on paper they finished in a dead heat when you account for differences in hitting environments. However, consider what they’ve done most recently. Through Saturday, Jeter hit .263/.339/.341 after the All-Star break. Hardy hit .307/.363/.447 during the same time. Now, Hardy hasn’t hit .313 in approximately 10,000 postseason games, so it’s not like we should be shouting, "The king is dead, long live the king," but Hardy is 27 and more or less healthy for the first time in a couple of years, while Jeter is older than a rerun of a first-season episode of "Happy Days."

Left Field: Delmon Young hit .298/.333/.493 this year and drove in 112 runs. As such, you’re going to hear a lot during the playoffs about what a breakout year he had. He did break out, at least by his own standards. Though Young had hit .290 coming into this season, his power production was light for a corner outfielder, especially one who fields as badly as Young does. This year he piled on the doubles and added a few home runs and suddenly got to the point that he was offensively useful. "Useful" is a long way from "great" or even "good," though; his on-base percentage is still only about league average, he doesn’t take many pitches, and the power was middling—take the batting average out of the equation and Young’s isolated power ranked 51st among batters who had 400 or more plate appearances. Grant him one thing, though: he was very quite good with runners on, driving in 20 percent of the baserunners he saw. He hit .332 with runners on, .357 with runners in scoring position.

If Young’s bat was legitimately good, why does Baseball Prospectus see him as only having been worth 1.6 wins above replacement to the Twins, while Baseball-Reference doesn’t even think he was half that good? The answer is in the glove. Young is a terrible fielder. The main problem seems to be lack of instincts. If you watch him for long enough, you will see many ill-advised dives and slides for balls that are always just out of reach. We all love the spectacular diving catch in the outfield, but most of the time it’s a really bad idea. Think about it: a ball that falls in front of an outfielder is usually a single. A ball that an outfielder dives for but misses is often a triple. Young doesn’t have the athletic ability to make these plays, but he also lacks the judgment not to attempt them.

Because of Young’s enormous defensive shortcomings, in any head-to-head matchup Brett Gardner has to get the nod over his Minnesota counterpart. Even though Gardner slumped badly after injuring his wrist at the end of June, his on-base percentage, speed, and defense continued to be an asset. He drew 79 walks to Young’s 28, so even though his batting average was 21 points lower, his on-base percentage was 50 points higher. Throw in 47 stolen bases to Young’s five (against four caught stealing) and you discover that for the season as a whole they were pretty much just as productive.

One Other Thought: Game 2 Starter

Phil Hughes has got to start on the road. Batters hit a home run once every 20 at-bats at home, but only once every 53 at-bats on the road. Target Field, with its hard-to-reach fences, seems to have been built for him. Andy Pettitte has the Yankees great gravitas that would normally make him an easy choice for the spot, but given how their rotation after the top three is… imaginary, the Yankees can’t overlook this chance to minimize Hughes’ weaknesses and put him in position to win.