Share All sharing options for: Projecting the Postseason Roster, Take 2

I first attempted to project the Yankees' postseason roster just under three weeks ago, but now that the postseason is upon us, yet the annoucement of the official roster is still a day or two away, I thought I'd take another stab at it.

Yes, Kearns has been awful of late, hitting .164 with 26 strikeouts and no extra-base hits in his last 74 plate appearances, but his roster spot doesn't seem to be in any danger. Asked about Kearns before Sunday's game, Joe Girardi said, "At this point [leaving him off] is not something we’ve talked about. My guess is he’s going to be there." Kearns haters can read into that "at this point" if you want, but don't get your hopes up.

You could debate the relative merits of Peña and Eduardo Nuñez for the backup infielder spot, but I'm not sure it's worth the effort, and the team will need one of the two to serve as the backup infielder, so the impact on the rest of the roster is negligible even if Nuñez gets the nod over Peña. For now, let's assume that the player who filled that position for the team all season, Peña, will continue to do so.

The Yankees have said they won't carry 12 pitchers in the postseason, I assume that means they will carry 11, so the final three roster spots will go to two pitchers and a hitter.

Taking the last first, I think it comes down to Nuñez (or Peña) and Greg Golson as a pinch-runner/ defensive replacement. If they take the infielder, they'll have five outfielders (Gardner, Granderson, Swisher, Kearns, and Thames), two of whom can play center and one of whom really shouldn't play the outfield at all, and five options at the three infield skill positions (Cano, Jeter, Rodriguez, Peña, and Nuñez). That's a better balance, but if the Yankees need to employ Peña and Nuñez simultaneously they've likely already lost, and I personally find the late-inning outfield defense offered by Gardner, Granderson, and Golson to be particularly compelling.

Golson and Nuñez had comparable success on the bases in Triple-A this year (Golson: 17 steals at 81 percent, Nuñez 23 steals at 82 percent), though Girardi also remarked recently that Nuñez seemed to be better on the bases than Golson, and the numbers back him up, even if only slightly. One solution there would be to take Nuñez and Golson and leave Peña behind, but Peña's glove is clearly superior to Nuñez's, which isn't meaningfully better than the aging veterans he'd be replacing in the late innings. Peña is the weakest hitter of the bunch, but if the Yankees wanted a bat on the bench they could take Juan Miranda, who can hit, but can't play anywhere but first base, where the Yankees already have Mark Teixeira and Lance Berkman as first-base-only options and Nick Swisher as a third-stringer.

I'm not sure there's a right answer here, but I'd be tempted to go with Peña and Golson as they can give the Yankees their tightest late-game defense, and both can run, making Nuñez's base-stealing moot. The only argument for Nuñez that I can see is the desire for an extra infielder. You don't pick a guy who hit .280/.321/.360 in 53 plate appearances because of his bat, no matter how weak his competition might be. 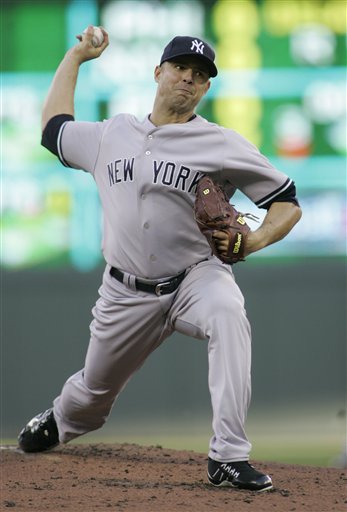 Yankee fans may not yet have seen the last of Javier Vazquez. (AP)

As for the pitchers, those last two spots will go to two of the following: Javier Vazquez, Ivan Nova, Chad Gaudin, Dustin Moseley, Sergio Mitre, and Royce Ring. Ring faced 12 batters as a Yankee this year, five of whom reached base (though one was David Ortiz via his final-act bunt at Fenway on Sunday). Still, eliminate Papi altogether and that's a .364 on-base percentage against a guy who is supposed to face one man and get him out. Three of Ring's five appearances as a Yankee lasted one batter. Only one resulted in an out. I just can't see that performance getting a guy who wasn't on the team all year onto the postseason roster and into key matchup situations in the Division Series.

The other five all qualify as long-relievers/emergency starters, so the decision can't be made based on role. Vazquez posted a 2.70 ERA, 3.0 K/BB, and 0.90 WHIP in 13 1/3 relief innings this year, so he's tempting. Ivan Nova was wild on Saturday in his only major league relief appearance, but had been consistently impressive in the early innings of his starts (opponents hit .196/.286/.268 against him the first time through the order in his seven starts), which recommends him for the role. Sergio Mitre seems to have been sharper of late, posting a 1.50 ERA over his last seven appearances (12 innings), but there's a .194 BABIP behind that, which suggests he was just lucky. Chad Gaudin was awful in September (7.45 ERA with opponents hitting .317/.391/.683 against him) despite a low BABIP (.258), so he should be right out, but Joe Girardi seems to have a soft spot for him, so I can't say he absolutely won't make it. Dustin Moseley, meanwhile, is a game-changing and thus potentially series-changing home run waiting to happen. He has allowed 13 dingers in jut 65 1/3 innings this season, a 1.8 HR/9IP rate that matches what he did in a smaller sample for the Angels last year.

Given all that, I'd go with Vazquez and Nova, but then I'm not Joe Girardi and Brian Cashman. You got a better idea?