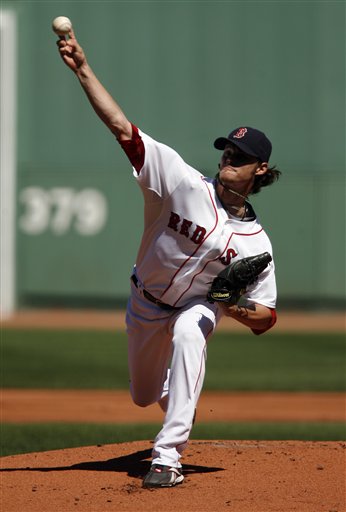 Clay Buchholz will go for his 18th win against A.J. Burnett in Saturday's game. (AP)

Thursday's off-day went as well as it could have for the Yankees as both the Rays and Twins lost, rounding the half-games down in the standings. The Yankees thus enter the final weekend tied for first place in the AL East with the Rays with a one-game lead over the Twins for the best overall record in the American League.

That sounds better than it is. Because the Rays won the season series against the Yankees (10-8) and both teams have made the postseason, a tie for the division would go to the Braves. Thus, in order to win the division, the Yankees need to win one more game against the Red Sox at Fenway over the next three days than the Rays win in Kansas City against the lowly Royals. That's a tall order and having a better record than the Twins, who host the Blue Jays this weekend, won't mean anything if the Yankees are the Wild Card as they would then automatically be the road team against the Twins in the Division Series, regardless of record.

Here, then are the pitching matchups for this weekend for both the Yankees' and Rays' series (and for those more interested in the two unsettled playoff spots in the other league, you can check out my preview of that action over at SI.com). Note that the Yankees will benefit from the absence of their rivals' third basemen (Evan Longoria due to injury, Adrian Beltre on unofficial paternity leave). That's no small thing given that Longoria and Beltre are top-five MVP contenders and easily the top bats in their respective lineups at this point in the season.

This is the most important game of the weekend for the Yankees because a healthy and effective Pettitte is they key to their postseason hopes given A.J. Burnett's struggles and Phil Hughes' fatigue. Pettitte has made just two starts since returning from the groin injury which cost him most of the second half of the season. In the first, he looked sharp and seemed to gain strength and command as the game went on, but he was almost too efficient and threw just 79 pitches in his six innings of work. His next time out, on regular rest, he developed back pain and got rocked by the Red Sox in the Bronx, giving up seven runs (six earned) on ten hits in 3 1/3 inning while striking out just one batter. Just as bad, he only threw 75 pitches in that start, which was supposed to stretch him out into the 90s. After the Yankees clinched a playoff berth on Tuesday in Toronto, Pettitte's Wednesday start was pushed back to tonight, giving him six day's of rest. The Yankees say Pettitte's back issue was muscular and likely a one-time issue, but they have to be worried about his ability to contribute at this point. A big outing tonight, which would be followed by a minimum of five days' rest before a possible Game Two start in the ALDS, would go a long way toward boosting the team's confidence going into the postseason. A bad one or another injury setbacak could throw their entire postseason rotation into even greater disarray.

Matsuzaka posted a 6.91 ERA in seven starts before dropping a gem on the Yankees on Sunday. Your guess is as good as mine which version shows up tonight, but those seven starts speak louder than the one and in his only other start against the Bombers this year, he gave up seven runs in 4 2/3 innings, also in the Bronx.

I can barely stand to write about this guy anymore. Burnett seemed to be on a fairly solid run in September, though two rain-shortened starts left his grade incomplete, then with a chance to clinch a playoff berth on Monday he took the mound with nothing and gave up seven runs in 2 1/2 innings against the Blue Jays. Just total garbage and the worst start in a season full of disasters. The Yankees are hoping he shows up on Saturday, but even if he does, would it make you trust him any more in his next start, which would come in the postseason? As discussed in our chat earlier today, the ALDS schedule favors a three-man rotation, with only the Game One starter (CC Sabathia in the Yankees' case) needing to start on short rest in his second start as a result. I told you a while back that A.J. Burnett would be in the postseason rotation, but if Pettitte comes through on Friday, I think Burnett just might get passed over in the first round.

Buchholz will pull down some Cy Young votes thanks to his 17-7 record and 2.33 ERA, though is peripherals (1.79 K/BB) and innings total (173 2/3) don't quite measure up to those primary stats. Still, at this point a matchup between him and Burnett seems like a mismatch in Boston's favor. Buchholz has a 1.74 ERA in his last 12 starts and has allowed just two earned runs in his last 21 innings (0.86 ERA). He has been hit-lucky, but he's also a former top prospect who is supposed to be this good without luck's help before long. Included in those last 12 starts was a seven-inning quality start win against the Yankees on August 6.

Who will the Yankees' mystery starter be? Well, it won' t be ALDS Game One starter CC Sabathia. It won't be Pettitte or Burnett, or, for that matter, Javier Vazquez, who would be on short rest after a stinker in Toronto. It could be Phil Hughes, but the Yankees would likely prefer not to add to his innings total in what, even if it impacts the division race, is in the big picture a meaningless game. That leaves Dustin Moseley, who last threw two scoreless innings on Monday, and Ivan Nova, who last gave up four runs in 4 2/3 innings against the Sox in a start last Saturday. Maybe it will be both of them in tandem. I expect Nova to make the postseason roster in a relief role, but he has yet to make a relief appearance since being recalled in late August. It might depend on whether or not one of those two (or both) is needed to mop up after Pettitte or Burnett. Whatever the choice, "spot starter" basically tells you what you should expect here.

Lackey has been a disappointment in the first of his five years with the Sox. Virtually all of his numbers headed in the wrong direction--his strikeouts are down, his walks are up and his ERA has gone up with them. The only improvement he made over his last two seasons with the Angels is that he stayed healthy all year. Sounds like someone we know. Since throwing six shutout innings against the Yankees in his first Red Sox start, Lackey has posted a 4.60 ERA while the Sox have gone 15-16 in his starts. He was better in September (3.73 ERA with four quality starts out of five), but the Sox still went 1-4 in his starts via poor run and bullpen support and one stinker from Lackey. When last he faced the Yankees, on August 7, Lackey gave up five runs in six innings.

Davies has gone 0-2 with a 8.82 ERA in his last three starts. He had three solid starts before that to cap of a decent eight-start run, but, still, if the Rays slide continues through Friday (they've won one of their last five against the Mariners, Orioles, and Royals and Friday's pitching matchup is surprisingly unfavorable), I'm guessing it will come to an end here.

O'Sullivan's last two starts (one against the Twins, one against the Indians) were quality, but in the four before that he went 0-2 with a 11.34 ERA. He has a 6.68 ERA since being traded to the Royals from the Angels in the deal for Alberto Callaspo. He hasn't faced the Rays this year, but he doesn't scare them, and shouldn't.

If the Rays win those last two games, the Yankees will have to sweep the Red Sox to win the division. I don't think that's going to happen, so expect my next preview to go into great detail on the Twins.