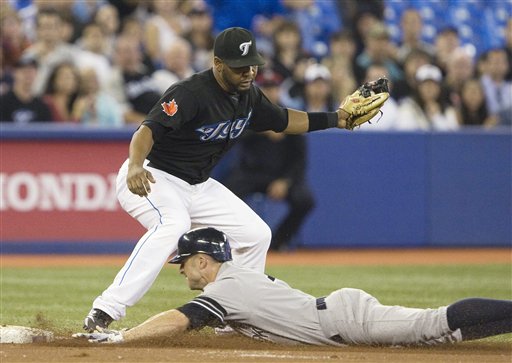 Save for Jay's willingness/need to play devil's advocate, yesterday's "would you rather" series regarding the Yankees' ideal ALDS opponent didn't stir much debate among the Bible Study Group, but I have to take issue with one thing Steve wrote in his piece. Although he more or less echoed my points about why the Rangers would be a better match, he slipped in this note about the Twins' home ballpark:

Some of the long fly balls that don’t leave the park do turn into triples; on a per at-bat basis, three-baggers have been hit more often at Target Field than any other park in the league. That would seem unlikely to help the Yankees. Maybe Curtis Granderson can leg out the odd fly-ball that wasn’t (he once hit 23 of the things), but many other Yankees are going to end up standing on second base, still far from crossing the plate.

That feels right, but it's not. The Yankees are actually third in the AL with 31 triples. That despite playing in a home park that in its debut season had a park factor for triples (according to the 2010 Bill James Handbook) of 50 (with 100 being average). Perhaps that has changed, because 16 of the Yankees 31 triples have come at home, but whatever the reason, the Yankees are indeed a big triples team this year.

Steve was right to name Granderson as a likely tripler, but his six triples this season are only second on the team to Brett Gardner's seven. Six different Yankees have three or more triples and every one in the typical starting lineup has at least one except for Mark Teixeira and whoever starts at DH (unless that DH is Jorge Posada, as the Yankee catchers have combined for four three-baggers, one by Posada, three by Francisco Cervelli).

Gardner is fifth in the AL in triples (behind Carl Crawford, Denard Span, Austin Jackson and Cliff Pennington). Granderson is sixth. No other team in the league has two men in the top eight (there are two Royals tied with Granderson, but one, Scott Podsednik, has since been traded).

Fortunately, as I wrote yesterday, the Ballpark in Arlington is also triple-friendly (2007 to 2009 park factor of 176!), not that the Yankees seem likely to play there again this year.

Oh, and while I'm raining on that particular parade, here's another reason why facing the Twins is less desirable: Justin Morneau just might play after all.