Bring on the Rangers III (Plus Chat Reminder)

Share All sharing options for: Bring on the Rangers III (Plus Chat Reminder) 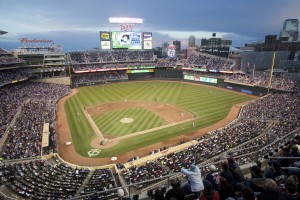 Target Field is no New Yankee Stadium when it comes to the home run. (AP)

With tonight’s loss, the Yankees’ chances of winning the AL East shrunk dramatically. Though they are just a half-game behind the Rays, they have just three games remaining on the schedule, and not only do they have to outplay the Rays, they have to outplay them against the Red Sox at Fenway Park while the Rays visit the Royals. The half-game gap will either disappear or expand to a full game on Thursday. The Rays will play the first of their games at Kansas City (Matt Garza vs. Zack Greinke) and the Yankees will rest. In not giving Javier Vazquez the quick hook tonight, Joe Girardi once again demonstrated that Yankees management is not going to lift a pinky to win the division. If it comes to them, great. If not, que sera sera.

So the odds that the Yankees will get any team but the Twins in the first-round of the postseason are shrinking. That is unfortunate, because like my colleagues Cliff and Stephani, I believe that the Rangers are the safer bet for the Yankees. The reasons were largely covered in Cliff’s argument: Target Field will punish a Yankees strength, power. I’ll add that the Twins’ staff seems specifically designed to attack the Yankees at another strong point, patience.

Taking the second point first, the Yankee’ offense is organized around power (third-most in the AL behind Toronto and Boston) and walks (second-most in the AL behind the Rays). Twins pitchers are the best in the league at avoiding ball four, passing just 2.3 batters per nine innings. Their wildest starter, Francisco Liriano, has averaged just 2.8 per nine—league average is 3.2—and he has swing-and-miss stuff that makes up for whatever wildness he might have relative to the rest of the staff.

Scott Baker, who has struck out 52 in his last 56.2 innings (10 starts sandwiched around a couple of skips due to elbow pain), is the other strikeout pitcher on the staff. The rest are put-it-in-play types. Normally, I would say, "Bring ‘em on!" because a power-hitting lineup against a contact-oriented team seems like it would lead to good outcomes for the hitters. In this case, though, the park comes into play. The AL is hitting .277/.338/.409 at Target Field with a home run every 53.1 at-bats, the lowest rate in the league. Some of the long fly balls that don’t leave the park do turn into triples; on a per at-bat basis, three-baggers have been hit more often at Target Field than any other park in the league. That would seem unlikely to help the Yankees. Maybe Curtis Granderson can leg out the odd fly-ball that wasn’t (he once hit 23 of the things), but many other Yankees are going to end up standing on second base, still far from crossing the plate.

Contrast that with the action in Arlington. At Rangers Ballpark, the AL has hit .270/.337/.422 with a home run every 31.2 at-bats, the fourth-highest rate in the league. Elvis Andrus personally distorts that ballpark’s ranking; take him out of the equation and they move up to third. Rangers pitchers, even with Cliff Lee hanging around for half the season, have walked 3.4 batters per nine innings. There are other qualities on which you can hang an argument about which team is better, and as we get into the actual head-to-head playoff rankings we will, but these two qualities, ballpark and control, seem to be an important place to start.

This Friday, Cliff, Jay, and myself will chat with you about the Yankees' postseason possibilities, plus anything else on your mind. Tell your friends! Tell your mom! Tell your friends' moms! We'll be waiting for them all at the lunch hour, so come prepared.