Bring on the Twins

Share All sharing options for: Bring on the Twins

Anyone who's seen my Playoff Prospectus pieces over at Baseball Prospectus knows I can go as deep as anyone in the business when it comes to breaking down a postseason matchup. But with the Yankees' first-round opponent not yet set in stone, I'm not going to max out my pitch count in pursuit of hypotheticals. I think the Yankees have an uphill battle to repeat as champions any way you slice it because of the concerns about their rotation and the likelihood that they'll be the Wild Card winners due to the Rays having the more favorable schedule the rest of the way.

Which means they'll likely be facing the Twins, and while my colleagues may view the Rangers' matchup as the more favorable one, I'm walking the contrarian path for the moment and embracing the matchup with Minnesota. Sure, Texas is the weaker team of the two going by record and run differential. Yes, the Rangers are the less-experienced postseason team, and top star Josh Hamilton may be ailing. Certainly, the Rangers have the more power-oriented pitching staff than the Twins, and as I pointed out recently the Yankees have feasted on power pitchers while struggling with finesse ones. 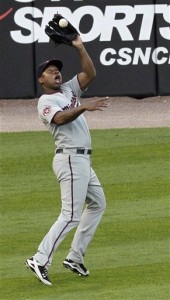 Delmon Young and the rest of Minnesota's defense leave something to be desired (AP).

But for the moment, I'll hang my hat on two points:

1) The Twins don't have a very deep rotation. Aside from Francisco Liriano and Carl Pavano, the Twins don't have a single starter with an ERA+ of 100 or higher, which is to say a better ERA than the park-adjusted league average. Kevin Slowey and Scott Baker are a tick below average, and Nick Blackburn is well off the pace; fill-in Brian Duensing is above-average, albeit in a smaller body of work — and as BP colleague Christina Kahrl points out, manager Ron Gardenhire has some tough choices to make given Baker's elbow and the uneven nature of Blackburn's season. The Rangers, by comparison, have four pitchers with ERA+ above 100 in Cliff Lee, Colby Lewis, C.J. Wilson and Tommy Hunter, and it's pretty obvious those are Ron Washington's front four. Now, I know it's hip lately to prefer component-based ERA measures such as xFIP or SIERA which strip out the luck on balls in play and focus on the repeatable skills of strikeouts, walks and homers (or groundball/flyball ratios) instead of good ol' ERA, but...

2) The Twins don't have nearly as good a defense as the Rangers. Texas is currently fifth in the league in Defensive Efficiency, converting batted balls in play into outs at a .704 clip. Minnesota, by comparison, is eighth at .693. Furthermore, the Rangers rank first in the league in Park-Adjusted Defensive Efficiency (2.06 percent above average) while the Twins again rank eighth (0.45 percent below average). So the Twins' pitchers allow more balls in play and convert fewer of them into outs, which is hardly a surprise when you've got guys like Delmon Young and Jason Kubel stumbling around the outfield. Add to that the fact that the Twins fielders will have to get to those balls in play under colder conditions than the Rangers' fielders would, and you can see how that might present an opening for the Yankees.

Convincing? Admittedly, I'm less than 100 percent sold myself. But after hours of banging my head against the desk trying to find reasons to embrace the inevitable, that's what I'm selling.