Bring On The Rangers

Share All sharing options for: Bring On The Rangers 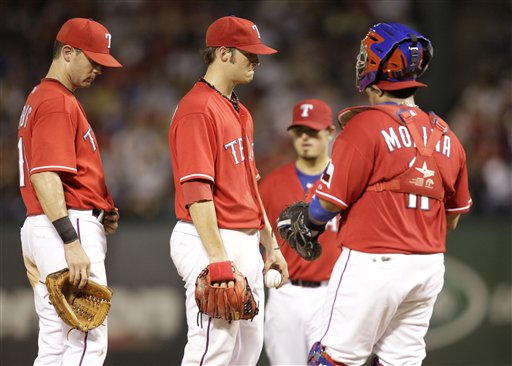 The Yankees would be better off facing the Rangers' power pitchers, like C.J. Wilson above, in the home-run friendly Ballpark in Arlington in the ALDS. (AP)

With the Yankees clinching a playoff berth Tuesday night, Steve has asked us to weigh in on what first round opponent, the AL Central champion Twins or AL West champion Rangers, we think the Yankees have a better chance of defeating in a five-game American League Division Series.

When asked this question in our PB Chat a week ago, I chose the Rangers. My quick reasoning was that the Rangers' rotation behind Lee didn't frighten me, the Yankees had handled Texas's number-two starter C.J. Wilson well this year, the Rangers had a losing record on the road, and Josh Hamilton had no timetable for his return to the Texas lineup. I also mentioned that the Ballpark at Arlington would be friendlier to the Yankee offense than the homer-eating Target Field, and that with Hamilton out, the Rangers' lineup wasn't all that intimidating. I stand by those arguments, though the circumstances surrounding some of them have changed, and will take this opportunity to expand upon them.

First, however, I'll add a new one, though it's a bit of a cheat. With five games remaining in the season, the Rangers' record is five games worse than the Twins. One more Rangers loss or Twins win will guarantee that the Rangers will face the AL East winner and the Twins the Wild Card team in the first round. Thus, if the Yankees face the Rangers in the ALDS, it will be because they won the division and, with it, secured home-field advantage at least in the first round.

The choice, then, between facing the Rangers with home-field advantage or the Twins with the majority of the games taking place in Target Field, seems much clearer. Again, I go to the potential opponent's road record and the homer-killing properties of Target Field. At the time of our chat last week, the Rangers had a losing record on the road and the Twins a winning one. The Twins have since sunk to .500 on the road, but the point stands. Consider them as four teams. Who do you want to face?

Now consider the ballparks as hitting environments for the Yankees, an offense-first club that leads the majors in runs scored per game and is third in home runs. The Ballpark in Arlington is a hitter's paradise. Looking at the park factors for the previous three seasons (2007 to 2009) in the 2010 Bill James Handbook we find the following:

Without a full season in the books, there are no park factors for Target Field yet, but a quick look at the raw data shows that just two ballparks in the majors have allowed fewer home runs this year, both of them notorious pitchers parks. There have been 94 home runs hit at Safeco Field, home to the worst American League offense of the DH era, 101 hit at CitiField in four fewer games than Safeco or Target have hosted, and 104 hit at Target Field. Limit the data to road-team homers only and only CitiField has allowed fewer (45 to 54 at Target), again in four fewer games played. A game-changing Yankee home run that could prove to be a postseason highlight in Arlington could wind up a warning-track fly out in Minneapolis.

Despite that significant difference, there is not a correspondingly large difference in run scoring at the the two parks. There have been 728 runs scored in 152 games (counting each scheduled game twice, once for each team) in Arlington and 676 runs scored in 154 games in Minneapolis. That's an average of 4.79 runs per game in Texas and 4.39 runs per game in Minnesota. A gap to be sure, but one smaller than the gap between the runs per game scored by the Yankees' and Rangers' offenses.

Yes, the Rangers might be getting Josh Hamilton back in time for the playoffs (the latest is that he might be able to DH on Friday, though until he can play the field the Rangers will have to sit Vlad Guerrero, who has heated back up in September, to play Hamilton or risk some brutal outfield defense), while the Twins don't seem likely to get Justin Morneau back, but the Twins have scored 5.19 runs per game since the All-Star break without Morneau, who suffered a concussion in early July. That's a significant increase over the 4.64 runs per game the scored in the first half largely with Morneau and is thanks to the fact that other members of the Twins' lineup have stepped up, not the least of whom is defending AL MVP Joe Mauer (.383/.459/.541 in the second half).

That just leaves my point about the Yankees' success against the non-Cliff Lee members of the Rangers' rotation. Well, let's take a quick look at the eight games the Yankees split with Texas this year:

The Yankees swept the Rangers at home in April by a combined score of 17-6. Two of the Rangers starters they beat were Scott Fledman and Rich Harden, who won't be in the Rangers' postseason rotation. The other was C.J. Wilson, off whom they scored five runs (three earned) in six innings on seven singles and three walks. Wilson faced the Yankees twice more this season, both of those latter games coming in Texas. On August 10, he allowed just two runs, but again walked three and was bounced with one out in the sixth. A month later, he again walked three Yankees, but this time in just three innings as the Yankees pushed across four runs those three frames. In each game, the Yankees got the wild Wilson's pitch count up quickly and they hit .300/.408/.350 against him as a team on the season. In those three starts, Wilson posted a 5.65 ERA and came away with a loss and two no-decisions (though the Rangers won both of the latter).

Wilson's August 10 start was part of a quick two-game series between the two teams in Texas. In the second game, Cliff Lee struck out 11 Yankees against no walks, but also gave up four runs in 6 1/3 innings, passing the game to his bullpen, which uncharacteristically blew it in the ninth with ace rookie closer Neftali Feliz taking the loss. Both Lee and Feliz have pitched better of late, but the Yankees proved they could get to both. In fact, for all of the fear that Lee's performance in Game One of last year's World Series strikes in the heart of Yankee fans, it's important to remember that the Yankees touched him up for five runs in Game Five striking out just three times against three walks.

Lee came back to dominate the Yankees in their final meeting this year, but that was the only game of the eight in which a Rangers starter dominated the Yankee lineup. The other two games of that series, both won by the Rangers in extra-innings, were Wilson's disaster start and a five-inning outing by Tommy Hunter in which he, like Wilson in his first two starts against New York, pitched reasonably well, but inefficiently and left with the game undecided, in part due to an hour-long rain delay. Hunter, however, won't be in the Rangers ALDS rotation, either, as Ron Washington has announced he will go with a three-man rotation of Lee, Wilson, and Colby Lewis. The Yankees have not faced Lewis this year, but as Jay wrote last week, the Yankees tend to fair better against power pitchers like Lewis than they do against the finesse pitchers who fill out the Twins rotation behind ace Francisco Liriano.

So, that's the long version of why I think the Yankees would be better off facing the Rangers. I'm sure there are many of you out there who disagree. Unfortunately, I think the dissenters out there are more likely to get their way as the Rays seem poised to take the division and thus the weaker opponent in Texas.