The Change Will Do Hughes Good

Share All sharing options for: The Change Will Do Hughes Good

As I joked first on Twitter and then in this morning's column at Baseball Prospectus, I was initially willing to fake my own death to avoid watching the potentially plodding Sunday night matchup between Dustin Moseley and Daisuke Matsuzaka. Luckily, Joe Girardi decided the best way to shake the Yankees out of their 6-13 September doldrums and their second four-game losing streak in a fortnight was by starting Phil Hughes instead of Moseley. Matched against a suddenly stellar Matsuzaka, who hadn't delivered a quality start since August 5, the kid gave the Yankees his best outing in more than a month. 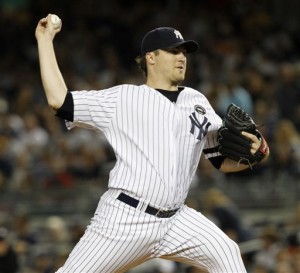 The return of a long-lost friend has helped Phil Hughes break out of a slump (AP).

By itself, Hughes' effort wasn't enough for the Yankees to secure a win. They needed a bloop and a blast — courtesy of Mark Teixeira and Alex Rodriguez, respectively — to overcome a 1-0 deficit in the seventh inning; the resurgent Rodriguez's homer was his fourth of the three-game series and eighth of the month. Alas, the suddenly struggling Mariano Rivera blew a save as the Red Sox ran wild on the basepaths, stealing four bases on hapless Jorge Posada en route to two runs in the top of the ninth. The Yankees rallied for a run of their own against Jonathan Papelbon in the bottom of the ninth, capped by Robinson Cano's RBI single. They won it an inning later against Hideki Okajima, aided by a perfect bunt by Brett Gardner down the first base line, followed by a wild Victor Martinez throw and a non-call on potential interference when the ball hit Gardner and bounded away as lead runner Curtis Granderson took third. An intentional walk and a fielder's choice later, rookie Juan Miranda worked the count in his favor and drew a bases-loaded walk to force home the winning run.

The win assured the Yankees of at least a game 163 play-in; one more win or Boston loss will assure them of a playoff berth. Baseball Prospectus' Playoff Odds give them a 99.93 percent chance of making the playoffs, just a hair below where they were after last Tuesday night's win over the Rays; they'd have to go 0-6 while the Red Sox go 7-0 in order to create a tie. Even with the Rays' loss on Sunday, the Yankees are still facing an uphill battle (22 percent chance) of winning the division due to the schedule inequity, but those chances more than doubled with yesterday's results.

Though he walked four hitters, Hughes looked a lot more in control of the game on Sunday night than he had in months; the last time he allowed just one run while pitching at least six innings was July 9. He's now delivered two quality starts in a row for the first time since mid-August, and he owes it in large part to the fact that he's finally integrating the changeup which helped him win the fifth-starter job back in the spring — but which may as well have spent the summer in the Federal Witness Protection Program.

According to the PITCHf/x data at TexasLeaguers.com, Hughes threw his changeup just 3.8 percent of the time against lefties (and just once to righties) from the beginning of the season through his September 5 start. In his three starts and one relief appearance since then, he's thrown it 12.1 percent of the time against lefties (and not at all against righties). He's throwing the pitch early in the count — 80 percent of the changeups come on 0-1, 1-0 or 1-1 counts according to the data at Joe Lefkowitz's PITCHf/x Tool — and while those batters are taking the pitch about three-quarters of the time, using it to change speeds has borne positive results on his overall outcomes against lefties:

Looking at that breakdown, one must concede the possibility of a fluke, given that Hughes' recent success in integrating the changeup against lefties is founded in an unsustainably low BABIP while his strikeout and walk rates move in the wrong direction. But at the very least, it's come at a most opportune time, as the Rays and Red Sox have stacked their lineups with lefties. Furthermore, it's come at a time when Hughes has suddenly been getting far more swings and misses with his fastballs against righties:

Hughes has now thrown 175.1 innings this season, meaning he's right up against what's believed to be his innings limit for the year. Assuming the Yankees take care of the business of securing a playoff berth at some point over the next week, he'll likely be consigned to a bullpen cameo rather than receiving another regular season start. Girardi has nothing penciled in beyond A.J. Burnett, CC Sabathia, and Andy Pettitte in Toronto, and no reason to push Hughes any further. He came up huge on Sunday night, and having done his part to help the Yankees secure a playoff berth, it's now up to the rest of the team to finish that job.