A-Rod is A-OK These Days

Share All sharing options for: A-Rod is A-OK These Days 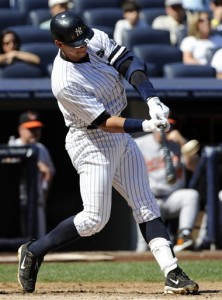 Since returning from the DL, Alex Rodriguez is swinging the bat better than he has all season (AP).

Don't look now, but Alex Rodriguez is having some kind of September. After bopping two home runs during Friday night's loss to the Red Sox, he's hitting .333/.405/.651 since returning to the lineup on September 5. Those aren't exactly Tulowitzkian numbers, but they do constitute his best month of the season — and really his first good month since May:

From June 1 through August 20, when a calf strain forced him to the disabled list, Rodriguez hit a hacktastic .242/.298/.479 with 14 homers in 265 plate appearances. Quite frankly, he was a mess; his unintentional walk rate (7.5 percent) was well below his career mark (10.1 percent), and his batting average on balls in play was a paltry .237, due in part to the fact that his line drive rate (10.5 percent according to the data at Fangraphs) was about half of what it was last year. Lefties particularly bedeviled him (.130/.215/.261 in 79 PA), and in fact he's still headed towards an uncharacteristically Grandersonesque showing against southpaws this year (.211/.311/.406 in 161 PA, with a .212 BABIP) after punishing them about as frequently as he has righties over the course of his career. We don't know how much his litany of leg problems factors into those dismal numbers, but those 15 days of rest have done him a world of good, and he's suddenly looking like the guy in the catalog again, the one making $32 million this year.

Rodriguez's second homer on Friday night was the 610th of his career, passing Sammy Sosa to move into sixth on the all-time home run list. The dinger was also his 27th of the season, giving him a shot at tying Barry Bonds' mark for consecutive seasons with 30 homers at 13. At .273/.343/.506, he's still in danger of finishing with his lowest career marks in batting average, on-base percentage and slugging percentage, but as with the suddenly resurgent Derek Jeter, his dip will pale in comparison to the fact that he's swinging the bat well at just the right time.