The Other Vazquez Games

Share All sharing options for: The Other Vazquez Games 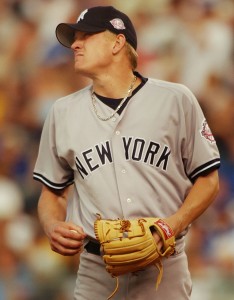 Courtesy of Baseball Prospectus’s Colin Wyers, the last five of the eight games in which a pitcher hit three consecutive batters (going back to 1950, the extent of Retrosheet’s play by play database). Some fairly decent pitchers have lost their control sufficiently to do what Javier Vazquez did tonight, although two were knuckleballers who had little idea where the ball was going anyway, and one did it on purpose.

August 11, 2004: Braves at Dodgers. After two outs in the top of the first, old Yankees favorite Jeff Weaver hit J.D. Drew, Chopper Jones, and Johnny Estrada in succession. Andruw Jones popped out to catcher for the third out, and no damage was done. Weaver would go seven innings, allow three runs, and win the game. Oddly, he walked just one.

May 22, 1999: Angels at Rays. Knowing how the Rays were back then, I guessed that the Rays pitcher might have been responsible. Incorrect. It was Angels starter Steve Sparks, a knuckleballer. The Angels were leading 2-0 going to the bottom of the third. With two outs, a run in, and no one on, future YES-man John Flaherty singled to prolong the inning. Wade Boggs walked—more on that in a moment. Sparks then hit Paul Sorrento, Miguel Cairo, and Kevin Stocker. The last two HPB forced Flaherty and Boggs home. Finally, leadoff man Quentin McCracken flied out to end the inning. The Rays went up 3-2, but lost the game in the middle innings.

A quick note on the Rays lineup that day. The three-four-five-six spots were taken up by Jose Canseco, Fred McGriff, John Flaherty, and Wade Boggs. That’s a place of honor for our Flash. Unless I missed something, when Vazquez fell apart tonight, Michael Kay asked Flaherty if he’d ever seen a pitcher hit three straight batters. Flaherty said no, but in fact he was on base one of the few times it has happened. He must have blocked the traumatic experience from his mind.

August 3, 1998: Astros at Marlins. The Marlins were leading 6-3 going to the bottom of the eighth, with C.J. Nitkowski on the mound for the ‘Stros. Derrek Lee hit an infield single to open the inning, after which Nitkowski hit Ryan Jackson, Kevin Orie, and Craig Counsell and was pulled from the game. Jay Powell came in allowed three consecutive hits—all to the infield!—scoring the three beaned batters before he finally got out of the inning. The Marlins won 11-3.

September 10, 1977: White Sox at Angels. Here comes another knuckleballer at work. The game was scoreless in the bottom of the first when Wilbur Wood lost control of the ball. Wood had been a great pitcher for several years, but 36 years old, very heavy, and worked for 300 innings a year, he was just about done. There were two outs and a man on first when Wood plunked Dave Kingman, Don Baylor, and Dave Chalk. Ron Jackson grounded out to end the inning and only one run scored. The Angels would knock Wood out of the game in the next frame, in part with a Bobby Bonds home run, and the Angels went on to win 6-1.

May 1, 1974: Reds at Pirates. This is actually a notorious game. Future Yankee Dock Ellis decided that his team was intimidated by the Big Red Machine and decided he would stir up some trouble. Ellis took the mound in the top of the first and plugged the first three batters, Pete Rose, Joe Morgan, and Dan Driessen, and might have hit Tony Perez as well but Perez proved elusive and took a walk to score Rose. Bucco’s manager Danny Murtaugh apparently realized that his pitcher had gone mad and yanked him from the game. No further damage was done in the first, and the Pirates took the lead in their half of the inning before ultimately falling by a score of 5-3.