Look up the word "palooka" in the dictionary and you'll find a picture of Kevin Millwood. The 35-year-old Orioles righty can take a beating; this is the third year out of the last four in which he's put up an earned run average above 5.00, mainly because he's a soft-tosser who doesn't miss enough bats or get enough groundballs to prevent many runs. Yet last Friday night, Millwood, who came into the game with a dreadful 3-15 record and a 5.30 ERA, limited to the Yankees to one run on five hits and four walks over seven innings, with Alex Rodriguez's first-inning homer his only blemish. Until A-Rod homered again in the ninth — a monstrous two-out, three-run shot — it appeared as though once again, the Yanks would fall victim to a pitcher with a shortage of stuff.

On the other hand, Matt Garza's a 26-year-old whippersnapper with mid-90s heat, a guy who tossed a no-hitter last year and who's one of the reasons the Rays are giving the Yankees a run for their money in the AL East. Yet on Monday night after dedicating an oversized monument to the late George Steinbrenner, the Yanks roughed up Garza for the third straight time en route to their emotional 8-6 win. They've now won the last nine games Garza's pitched against them, though not all of that streak is on the shoulders of the pitcher in question. 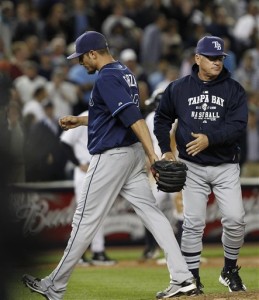 In keeping with their penchant for pounding power pitchers, the Yankees gave Matt Garza a hard time on Monday night (AP).

As I noted a few weeks back at Baseball Prospectus, this current Yankees squad has shown a penchant for being befuddled by some less than imposing hurlers. They've had days where they couldn't buy a run from the likes of Bryan Bullington, Kyle Kendrick, Jamie Moyer, Sean O'Sullivan, Brad Bergesen, Josh Tomlin — guys who will never win a Cy Young award, and might not even be able to break a pane of glass with their fastballs. At the same time, they've had above-average success against the harder throwers, even beyond what you'd expect for a team with such a high-octane offense.

The great Baseball-Reference.com tracks the splits of each team's hitters against power pitchers (those in the upper third of the league in strikeouts plus walks per nine), finesse pitchers (those in the bottom third in same), and the ones in between. The Yankees have hit significantly worse against the finesse bunch:

The two right-handed columns are the team's adjusted OPS relative to their hitting as a whole (tOPS+) and to the AL performance in that category (sOPS+), with 100 being average. These figures demonstrate how the Yanks dominate power and neutral pitchers, with production rates more than 30 percent above league average, but are slightly subpar against the finesse ones. For reference, here's how the AL as a whole does against these three classes:

The Yankees have about 50 points of OBP and 70 points of SLG to their advantage when it comes to power pitchers, but they're down about 10 points of AVG and SLG against the finesse ones. This marks the first time since 2004 that the Yanks have been subpar against the latter. It isn't a small-sample fluke, either; the team has more plate appearances against the finesse-sters (2998) than against the other two groups combined (1296 for the power pitchers, 1600 for the neutrals), which means they're getting a slightly larger share of soft tossers than the rest of the league, 50.9 percent to 47.8 percent.

Exactly what's going wrong isn't clear; the Yanks are drawing unintentional walks more than the league average against even those stingy hurlers (8.7 percent to 7.2 percent) and their isolated power (SLG - AVG) is within a point of league average. Their batting average on balls in play against such hurlers is .292, six points lower than the league, suggesting this might just be a bit of bad luck at work, at least insofar as it's put them on the wrong side of average. By comparison, the Yanks have BABIPs 10 points above average versus the power pitchers (.303 vs. a league average of .293) and 23 points above average versus neutral ones (.318 to .295). They were a better team against power pitchers last year as well, with an sOPS+ of 145, compared to 110 for neutral and 119 for finesse.

In the abstract, it's power pitchers that a team is more likely to face in October, but looking ahead to the two teams which the Yankees might play in the first round, both are much less power-hurler happy than you might expect. The Twins' staff is 10th in the league in strikeouts per nine (6.4) but first in walks (2.3); among the starters, Francisco Liriano qualifies as a power pitcher, but Scott Baker's in neutral territory, and Kevin Slowey, Carl Pavano and Nick Blackburn are firmly in the finesse camp. Pavano's got the fourth-lowest strikeout plus walk rate per nine of any American Leaguer with at least 50 innings (1.5 BB/9, 4.8 K/9), while Blackburn is the lowest (2.2 BB/9 and 3.5 K/9). The Rangers, meanwhile, have the fourth-highest strikeout rate (7.3) and the fourth-highest walk rate (3.5) in the league. Rich Harden is firmly in the power camp, but he's been so erratic with the walks that he's been exiled to the bullpen lately. C.J. Wilson and Colby Lewis both qualify as power pitchers, but Cliff Lee's absurdly low walk rate (0.7 per nine between Seattle and Texas) pushes him into the finesse camp despite the fact that he ranks 10th in strikeout rate (7.8), and both Scott Feldman and Tommy Hunter count as finesse pitchers as well.

In the end, worrying about opponents based upon the power/finesse distinction may be overthinking the situation a bit, since not all of the aforementioned hurlers are particularly appealing ones from their own teams' standpoints when it comes to postseason starts. The Yanks would certainly rather take their chances with a palooka like Blackburn (5.43 ERA) or Feldman (5.47) than face a Liriano or a Lee, no matter what the splits say.