Donnie in the Driver's Seat

Share All sharing options for: Donnie in the Driver's Seat

A couple weeks back I noted the sad end ex-Yankee skipper Joe Torre appeared headed towards in the City of Angels, and the decreasing likelihood that current Dodgers hitting coach and designated successor Don Mattingly would take over the helm. A short while ago, Yahoo's Tim Brown reported that Torre has indeed decided to step down at the end of the season, and that Mattingly will get the nod. 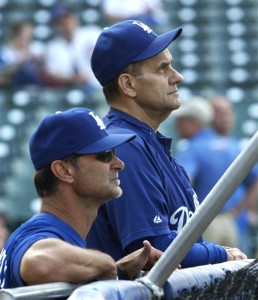 Don Mattingly has gotten the call to take over for Joe Torre in Los Angeles (AP).

The news that Torre won't be back doesn't exactly come as a surprise. The Dodgers have fallen to three games under .500 thanks to a 23-36 record since the All-Star break, and their listless offense has scored just 3.2 runs per game in that timespan, almost entirely without Manny Ramirez; they've given up the ghost. Torre did plenty to help them dig their hole, making all kinds of mistakes mishandling his bullpen and his young regulars such as Russell Martin and Matt Kemp, exhibiting classic symptoms of disconnection common among managers beyond age 65 (Torre just turned 70 in July). It's an inglorious end, but let's not forget that Torre guided the Dodgers to back-to-back trips to the National League Championhip Series in 2008 and 2009, following their first playofff series wins since 1988. He's quitting while he's ahead on the balance sheet.

It certainly didn't help Torre's cause that Dodger owner Frank McCourt has become embroiled in a soap operatic divorce with wife and former team CEO Jamie McCourt. The story of their split broke just as the team was headed to the postseason last year, and the team's subsequent pennywise but poundfoolish offseason plan left Torre's squad lacking in pitching depth and with an increasingly mortgaged future. The first phase of the divorce trial began in late August and quickly turned into a full-blown spectacle, and the second phase is looming; by now it's abundantly clear that no matter which McCourt(s) own the team, they've lost all credibility with the city of Los Angeles, as former owner Peter O'Malley so eloquently put it yesterday. Why associate with that, particularly given that the team is so heavily leveraged that appropriate expenditures for a contender are unlikely. There's simply not much point for an aging manager who expects nothing if not playoff contention to stick around, not when he's got a wife and kid at home.

Which leaves Mattingly holding the bag — but at least he's holding it, not only after losing out to Joe Girardi for the right to succeed Torre in the Bronx after the 2007 season, but also after being overtaken in the buzz department by Triple-A Albuquerque manager Tim Wallach in recent weeks. Mattingly has never held a managerial position either at the major or minor league level, and while that in and of itself doesn't preclude success in the majors — Ozzie Guillen and Bob Brenly both won world championships in their first gigs, so how hard could it be? — he's most notable for his spectacular screwup during one game this summer after Torre was ejected, when he was forced to remove his pitcher because he made two visits to the mound. Mattingly's slated to skipper the team's entry in the Arizona Fall League, but it's not like he's going to come up against the multitude of problems a manager must solve over the course of a 162-game season, ranging from how to run a bullpen for the long haul to how to deal with unhappy stars receiving diminished playing time.

Perhaps the diminished expectations that come with taking over a .500ish team in turmoil and on a limited budget will work in Donnie Baseball's favor, and his classy brand of professionalism will rub off to produce a plucky band that can sneak up on the NL West the way this year's supposedly-rebuilding-in-the-wake-of-ownership's-divorce Padres have. Or perhaps he'll find that like many a former star, he's not quite cut out for the more quotidian tasks required of a manager, and that his apprenticeship at Torre's knee in no way prepared him for such a monumentally difficult challenge in the glare of the spotlight. We'll soon find out if he was ready for his close up.