Share All sharing options for: Ball Four at Forty

In 1963, his second year in the majors, 24-year-old hard-throwing righty Jim Bouton won 21 games for the Yankees, helping them to the American League pennant. He added 18 more wins the following year, plus two more in a losing cause in the World Series. Then Bouton hurt his arm, and his career tumbled downhill rapidly. From 1965 through 1968, he went a combined 9-24 with a 3.95 ERA while shuttling between Triple-A and the Bronx. In the winter of 1968-1969, when the Yanks had completely given up on him — they were busy sliding into oblivion themselves — Bouton became property of the expansion Seattle Pilots. 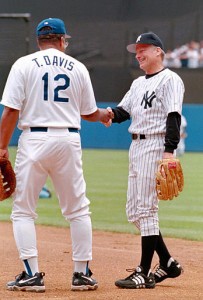 Former Yankee Jim Bouton is always game for a comeback, and so is his book, the classic Ball Four (AP).

Desperate to stay in the major leagues, Bouton turned to the knuckleball, and he hung onto a job literally by his fingernails, working primarily as a mopup reliever for the 1969 Pilots, a team that lost 98 games; he received a respite was traded late in the year to Houston. At the same time he was doing this, Bouton kept a diary, which with the help of editor Leonard Schecter turned into Ball Four, a book which would go on not only to become a controversial bestseller but the only sports book among the New York Public Libary's Books of the Century.

Ball Four is still being celebrated. Last month, the Baseball Reliquary — a shrine for the game's iconoclasts and outcasts, based in the Pasadena Central Library — put together an exhibition in honor of the 40th anniversary of its publication, and this coming Saturday at the Burbank Central Library Auditorium, they'll hold a special day-long panel featuring Bouton as well as the world premiere of a documentary on the Pilots, who spent just one season in Seattle before fleeing to Milwaukee to become the Brewers.

Ball Four is credited with being the first book to give a candid glimpse into the lives of major league ballplayers — hard-drinking, skirt-chasing, amphetamine-popping athletes using four-letter words — as they try to cope with the pressures and the boredom of the game. The story is set against a backdrop of social upheaval, and the outsider Bouton often finds himself at odds with his teammates when it comes to his views on the war in Vietnam, race relations, politics and the burgeoning union movement inside the game — which would eventually challenge the Reserve Clause, leading to higher salaries and the right to free agency. Amazingly, such an explosive exposé did not win Bouton many friends inside the game.

Hapless commissioner Bowie Kuhn attempted to get Bouton to sign a statement stating that its claims were fiction, a move which backfired. "I guess if you're writing a book, you want to be banned in Boston or called in by the Commissioner," Bouton recounted recently. "It was the perfect form of censorship. The publisher had only printed 5,000 copies on the grounds that nobody would want to read a book about the Seattle Pilots written by a washed-up knuckleball pitcher. Then the baseball Commissioner calls me in, and they have to print another 5,000 and then 50,000 and then 500,000 books..."

Fellow players accused Bouton of violating the sacred trust of the locker room. Bouton's ex-teammates with the Yankees were said to take it very hard, particularly Mickey Mantle, whose debauchery had previously been hidden from fans young and old by writers who felt it best to present sanitized heroes to the public. Bouton was effectively blacklisted by the Yankees; after retiring from baseball, he initially worked as a TV reporter and was even prevented from entering the Yankees' spring training facility by former teammate Elston Howard, then a coach.

Bouton didn't return for an Old-Timers' Day until 1998, then only after the tragic death of his daughter Laurie in an automobile accident had prompted his son Michael to write an open letter to the New York Times, asking the team to help Bouton heal old wounds. Since then, Bouton's been incorporated back into the fold, tossing knucklers at a few more Old Timers' Days and continuing to write about baseball, in fiction and non-fiction form. His most recent book, Foul Ball, chronicled his attempt to save an old minor league ballpark in western Massachusetts; in doing so, he uncovered a scandal: the land which was to be donated — by the local Berkshire Eagle, Bouton's chief opposition — to build the new ballpark was found to be contaminated with carcinogens.

Even if you don't make it out to California to partake in the Ball Four festivities (the exhibit closes October 1) there's a crop of good stuff to be had online. Start with the three-part interview podcast from Ron Kaplan's Baseball Bookshelf (one, two, three), and read his piece on the book's legacy. Check out Scott Simon's interview with Bouton for NPR Weekend Edition, as well as older takes of renowned writers such as Allen Barra, Jim Caple, Rob Neyer, even Robert Christgau. Take a gander at the two-part trailer for The Seattle Pilots: A Short Flight into History, as well as this brief outline of Bouton's career, which includes rare clips of him on The Tonight Show, in Robert Altman's The Long Goodbye, and making a comeback with the Atlanta Braves.

And by all means, if you haven't read Ball Four, do so at your earliest convenience. It's a book I myself have read at least half a dozen times since my grandfather gave me a dog-eared paperback when I was nine years old (I've even gotten to meet its author a couple of times), and I know of fans who re-read it on an annual basis, as a rite of spring. Every time through yields fresh insights as well as familiar laughs. Its tales of camaraderie, clubhouse pranks and good old-fashioned yarns form an often hysterically funny counterpoint to the battle for survival being fought on a daily basis by a group of players near the ends of their big league ropes. It continues to endure, to be hailed as a classic, because it's a book about far more than just a game.