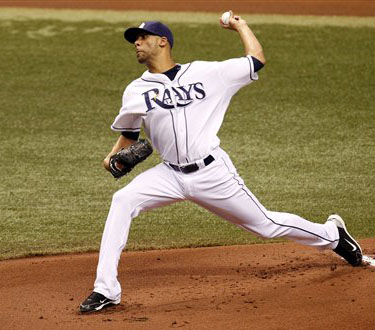 David Price and the Rays are gunning for the Yankees down the stretch. (AP)

The Yankees' just-completed series against the Rangers didn't bear much resemblance to the potential playoff matchup between the two teams, but the seven games the Yankees and Rays will play against each other over the next 11 days are the real deal. Start with CC Sabathia and David Price dueling it out tonight with the two teams separated by a half game and tied in the loss column in their battle for both the AL East and the major league's best record. Then consider that these seven games comprise more than a third of the remaining regular season (seven of 19 remaining games for the Yankees, 20 for the Rays). Whatever auditioning the two teams have left to do for their postseason rosters, much of it will have to come against a potential second-round opponent.

Neither team's playoff berth is at stake in this series. The Yankees still lead both the Red and White Sox, who are tied for second in the Wild Card race, by eight games with 19 to play, the Rays by 7 1/2 games with 20 to play. What is at stake is home field advantage in both rounds of the playoffs. The team that loses the division will, as the Wild Card team, lack home field in either round. The team that wins the division will, most likely, boast the majors' best record and thus claim home field in both rounds (the National League, having won the All-Star Game, has home field for the World Series). The one caveat there is that the Twins are surprisingly close to the best overall record in the game, trailing the Yankees by just two games, and while the Yankees and Rays are beating each other up, Minnesota will play its final 16 games against the A's, Indians, Tigers, Royals, and Blue Jays. Of course, the Twins would have to actually win the Division Series to make use of their potential second-round home field advantage; their last four playoff berths have ended in first-round exits, three of them, including last year's, at the hands of the Yankees.

Back to the Yankees and Rays, the season series to this point is as close as it can get. The Rays hold a one-game advantage (6-5) and have outscored the Yankees by just one run in those 11 games (59-58). Overall, the Yankees and Rays are exceedingly well-matched. They boast the the top-two offenses in the game by runs scored per game and rank third and fourth in the AL in fewest runs allowed, the Yankees having the advantage on offense, the Rays on defense, which is likely as much a product of their respective home parks as anything else.

The Yankees took two of three from the Rays in Florida in April, their one loss coming as a result of a dominant David Price start opposite Javy Vazquez's debut meltdown. The Rays then took a pair of high-scoring games in the Bronx in mid-May by a total score of 18-12. Mid-July saw the Yankees take two of three at home, winning the first on a walkoff single by Nick Swisher in the bottom of the ninth, the later win coming in David Price's one ugly start of the season. Back in Florida at the end of the month, the two teams played a tidier set with the Rays taking two of three winning well pitched duels 3-2 and 3-0 in the bookend games while the Yankees won with another ninth-inning run in the middle game, that one a Robinson Cano home run off Rafael Soriano. Looking at things that way, it should trouble the Yankees that three of their five wins against their division and potential ALCS rival have come via late-game heroics and an uncharacteristically poor start from the rival's ace.

Nonetheless, the teams enter this week's three-game set tied 3-3 at Tropicana Field. The Rays haven't shown a significant home-field advantage on the season, winning 43 games both at home and on the road, but losing four fewer at home. The Trop is, however, a very pitching-friendly environment, and the Rays have allowed just 3.68 runs per game there on the year. The Yankees, meanwhile, score more than a run per game less on the road, though that's relative to a startling 5.91 runs per game at home, and they've also been stingy in their road grays, allowing just 3.9 runs per game outside of the new bandbox in the Bronx. That all suggest we're in for some exciting, well-pitched baseball over the next three nights with, as you'll see below the jump, particularly compelling pitching matchups in the first two games.

The Yankees and Rays kick things off with style by sending their two lefty aces, two of the top three contenders for this year's American League Cy Young award, to the mound in the opener. Unlike the Rangers series, this very well could be a playoff preview, as both pitchers are the likely Game One starters for their team.

Price last faced the Yankees, and Sabathia, in his first start of the second-half back on July 18. That was his one truly awful start of the season, but he later admitted he hadn't properly prepared for the game coming out of the break. In his nine starts since then, he has posted a a 2.93 ERA with 60 strikeouts in 58 1/3 innings, and in his first meeting with the Yankees back in April, he was typically dominant.

Sabathia snapped a streak of 16 quality starts three turns ago and has now had two duds in his last three outings. Even with eight one-hit, shutout innings against the A's in the middle, his ERA over those last three starts has been 4.22. Sabathia makes his second attempt for his first 20-win season in this game. He has three prior quality starts against the Rays this season including a near no-hitter back in early April.

In two of Ivan Nova's last three starts he struck out 13 men in 11 2/3 innings. In the middle start, he struck out no one in 4 2/3 innings. The real Ivan Nova is somewhere in the middle, though the real Ivan Nova also gets a majority of ground balls, which the major league edition has done just once in four starts, and barely in that case. Nova is still finding himself in the majors, but he's been one of the Yankees' best mid-rotation options in the process and a few more quality starts could, nay, should earn him a spot in the postseason rotation.

Matt Garza is what the Yankees wish A.J. Burnett would be. He's a hot-head and occasionally gets lit up, but more often than not, he turns in a strong outing and he's occasionally flat-out domnant. For example, in his last start, Garza gave up six runs in 4 1/3 innings, five of them coming on a quartet of home runs, to a decimated Red Sox team, but in the six starts prior to that he posted a 1.32 ERA only once allowing more than one earned run. On July 20, Garza gave up seven runs, again surrendering four home runs, to the then-still-lowly Orioles. In his next start he no-hit the Tigers while allowing just one baserunner. If only Burnett would be that good when he's good the bad would be easier to take.

Hughes makes this start on something like nine day's rest, except he threw an inning of relief on the day of his regularly scheduled start on Friday night. Hughes was sharp in that inning, needing just 11 pitches to get through a perfect frame, striking out one. I'm still convinced that his loss of command in his recent starts is a result of the fatigue from having reached uncharted innings territory and that he's headed back to the bullpen for the postseason. Still, these extra regular season starts are important to stretch him out so that he won't be in such unfamiliar territory at this point next year. I don't expect much from him at this point in the season, however.

Shields is having a relatively poor season by his own standards due to bad luck on hits (.330 BABIP) and homers (10.5 percent of his fly balls have become homers against a league average of 7.6), though it's worth noting that he's also inducing fewer ground balls and more line drives. That doesn't jive with his career-best strikeout rate, but it all works out to something less than what the Rays had hope for from Big Game James. In his last two starts, Shields has allowed 11 runs (ten earned) in 11 1/3 innings including three home runs, and since opening the season 5-2 with a 2.99 ERA in his first ten starts, he has gone 8-10 with a 6.22 and a whopping 23 homers allowed in 19 starts.

Note: the Rays have been using a three-man rotation at DH with Baldelli batting against lefties and Johnson and Hawpe splitting time against righties. Hawpe and Baldelli weren't added to the roster until September, but either could be subbed onto the postseason roster in Kapler's place if he remains on the disabled list.