Reasons to Be Cheerful in Spite of a Sweep

Share All sharing options for: Reasons to Be Cheerful in Spite of a Sweep

While you're busy not panicking over the Rangers' sweep of the Yankees in the sweltering Texas heat, take heart in the fact that a couple of their secondary bats are coming around. The Yanks haven't exactly been scoring in droves lately (4.2 runs per game in September on .255/.352/.367 hitting en route to a 5-6 record — but as I told you, DON'T PANIC), but both Curtis Granderson and Lance Berkman are beginning to look surprisingly lifelilke.

First, Granderson. It was just over a month ago that he went to hitting coach Kevin Long for help retooling his swing, specifically by eliminating some of its extraneous movement. While his overall numbers haven't taken a huge jump since then — particularly as he's fallen into a 2-for-19 mini-slump over the past week — there's reason to be optimistic that the change has taken hold. Check out the splits since he reemerged in the Kansas City series:

First things first: NuCurtis is making more contact than before, as noted by the 20 percent drop in his strikeout rate. When he makes contact, he's actually hitting for a higher average (BACON isn't just a tasty breakfast food, it's Batting Average on CONtact: H / (AB-SO)). Granderson's not exactly getting lucky when he makes contact; his Batting Average on Balls in Play has dropped 19 points (it's 51 points below his career rate!), but the balls are flying out of the park. His home run rate has doubled from 3.0 percent of plate appearances to 6.1 percent, and his isolated power (SLG - AVG) has increased from .176 to .252. Along with all of that, his unintentional walk rate has risen nearly 60 percent. 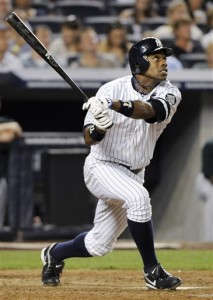 Things are finally looking up for Curtis Granderson (AP).

The result is a much more productive hitter. Granderson's seven homers are tied with Marcus Thames for the team high since August 12. Only Thames (.606) and Jorge Posada (.564) have higher slugging percentages in that span, albeit in about 20 percent less playing time; only Robinson Cano has as many total bases (51). As if that weren't impressive enough, Grandy's hitting .342/.419/.579 with two homers and five walks in 43 plate appearances against lefties, compared to an anemic .206/.243/.275 with one homer and five walks in 110 PA against them before.

As for Berkman, the numbers are less substantial, and there may be less to them, but they're still worth noting. The Big Puma is 11-for-23 since returning from the disabled list on Septembr 1, hitting .478/.556/.565. Sure, that's pretty slaptastic; he's got two doubles and no homers in that 27 PA span. By comparison, he was 7-for-39 with four doubles and no homers in 44 PA (.179/.273/.282) prior to hitting the DL. The big difference is BABIP: .212 before, .550 after, an unsustainable rate which at least suggests he's comfortable in the batter's box and not trying to do too much beyond focusing on hitting his pitch. What's of more concern is that Berkman's isolated power is just .097 since coming to the Yanks (.387 SLG, .290 AVG) compared to .191 before, suggesting that he's still not driving the ball to the extent that he should be.

These are small samples to base conclusions upon. But on a day when it's not a whole lotta fun to think about the Yankees being swept by a playoff-bound team, they're something to write home about.