A couple weeks back, Kerry Wood supplanted Pedro Martinez by reaching the 1500 career strikeout mark in the fewest innings of anyone in baseball history. It took Wood just 1,303 innings to reach that plateau, whereas Martinez reached it in 1,337. As relatively obscure milestones go, it was a bittersweet one. Not only did it hearken back to the time when Wood was the most promising young pitcher in the game, whiffing a record-tying 20 hitters in just his fifth major league start, but it also served as a reminder that such an unparalleled ability to miss bats is both a blessing and a curse. 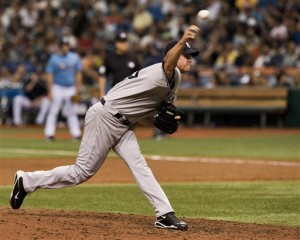 Kerry Wood has been a key figure in the Yankee bullpen's turnaround (AP).

Getting hitters to swing and miss is a seductively intoxicating feat. It's the game's most cathartic event save for the home run, not to mention its most storied ("Mighty Casey has struck out!"). It makes for smart baseball to boot, for with the rare exception of a wild pitch or passed ball, fielders can't screw up a strikeout, and runners can't advance. The downside is that it can cause an enthralled manager to overwork a spectacular young arm whose owner regularly runs deep into the count in pursuit of the K.

Which is more or less what happened to Kerry Wood via managers Jim Riggleman and Dusty Baker. Despite winning NL Rookie of the Year honors in 1998, Wood didn't pitch a regular season game after August 31 due to elbow soreness, and after making one playoff start — what were they thinking? — he wound up missing all of the following year due to Tommy John surgery. He returned and spent the better part of the next five years (2000-2004) pitching reasonably well for the Cubs; though he never won more than 14 games, he did lead the league in strikeouts and fewest hits per nine in 2003, the year his team came within five outs of reaching the World Series for the first time since Mrs. O'Leary's cow committed arson.

Wood was particularly dominant down the stretch in 2003, compiling an 0.84 ERA and whiffing 12.1 per nine over his final six starts, but his performance was a typically double-edged sword, as he averaged 121 pitches per start; Baseball Prospectus' Pitcher Abuse Points metric tagged him as the second-most overworked starter in the game, with rotation-mate Mark Prior fourth; at the top of the list was Javier Vazquez, the year before his first ugly stint in pinstripes.

Not surprisingly, shoulder woes soon cut into Wood's time on the mound, and his performance. He pitched just 110 innings from 2005-2007 due to surgeries on his biceps and knee as well as a lengthy rehab from a partially torn rotator cuff. Amid that litany of injuries, Wood transitioned to a relief role, which helped keep him somewhat healthy; he served as the Cubs' closer in 2008 and saved 34 games while earning All-Star honors. He could still miss bats with the best of them, racking up a nifty 11.4 strikeouts per nine in the process.

The Cubs, whose medical files on Wood must have required a separate warehouse in Wrigleyville, decided to quit while they were ahead, letting Wood depart as a free agent at that point. He signed a two-year, $20 million deal to be the Indians' closer, but struggled at the outsets of both 2009 and 2010, the latter in part due to a strained lat. When Chris Perez staked his claim on the closer job during Woods' absences (the second due to blisters), Cleveland made him available, and the Yankees snagged him at the July 31 deadline.

Wood arrived carrying a hefty 6.30 ERA thanks to a few early-season drubbings which stuck to him like Ben and Jerry pints on a coed's thighs, but he's been pretty close to lights out since coming over. Relieved of closer duty, he's become the reliable righty setup man the Yanks have sorely needed all year, with a solo homer in his second outing the sole blemish on his mark. He's pitched 16.2 innings for the Yankees, allowing 10 hits while striking out 20, even stranding all eight runners he's inherited. Sure, his 10 walks have made for some adventures, but with men on base, batters are just 4-for-22 against Wood.

As noted before, the Yankees' bullpen has suddenly jelled with the addition of Wood. After ranking ninth in the league in BP's Reliever Expected Wins Added stat (WXRL, which incrementally credits and debits every reliever with a fraction of a win based upon the game state in which he enters — inning, out, runners on base, relative score — and when he departs) through the All-Star break, they've been the best in the AL by a long shot in the second half:

FRA is Fair Run Average, a pitcher’s runs allowed (earned and unearned) per nine innings, adjusted for inherited and bequeathed baserunners and the number of outs.; the 1's and 2's denote the half of the season in question. As you can see, the Yankees are 1.4 wins better than any other AL bullpen since the break, nearly three wins better than the Rays in that span, and nearly five wins better than the vanquished Red Sox. Wood himself has been worth 0.7 WXRL; by comparison, Joba Chamberlain's been worth 1.1 the entire year, David Robertson 1.6, and Mariano Rivera 4.0. To be fair, Chamberlain (1.0), Robertson (1.2) and Boone Logan (0.9) have all been more valuable in the second half, but then they did have two more weeks to accrue that value before Wood arrived.

The bottom line is that the Yankees have finally built a bullpen that works, and it's come at just the right time... hopefully. The bullpen's stellar 2.03 ERA in the second half is offset by the rotations' ugly 5.08 mark, which does more to imperil the team's chances of repeating as champions than photos of Joba in a thong would do to your appetite.

It's too early to think about whether it will be worth bringing Wood back in 2011. As a closer, he could earn bigger dollars elsewhere, which will drive up his price as a setup man should he choose to entertain such offers. One needs to only remember the words "Steve %&#@*$! Karsay" to be reminded that such investments often backfire explosively. But for a player who's always had a spotty relationship with the medical profession, Wood's been just what the doctor ordered, and he'll be a key figure in the Yankee bullpen for the remainder of his time in pinstripes.