Share All sharing options for: Texas Tidbit: The Self-Made Man 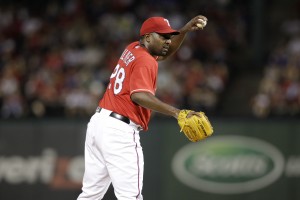 With the Yankees heading to Texas to play the Rangers, this is a good time to celebrate the strange career of Darren Oliver. A third-round pick of the Rangers’ back in 1988, he got a cup of coffee in 1993, then spent 1994 in middle relief, where he struggled with severe control problems but was otherwise effective. The next season he began making the transition to starting, his minor league role, and at first he was effective in a league-average sort of way—200 innings of a 4.20 ERA in Texas in 1997 isn’t a bad thing. After that, though, he rapidly became a punching bag. His left-handedness kept him in the majors, sending him bouncing from the Rangers to the Cardinals, back to the Rangers, to the Red Sox, the Rockies, the Marlins, and the Astros. From 1998 to 2004, he pitched 182 games (159 of them starts) and went 52-59, actually a shockingly good record considering that his ERA was 5.48.

In 2005, Oliver signed with the Rockies but couldn’t make the team. Released at the end of spring training, he signed with the Diamondbacks and was sent to Triple-A. He made four starts for Tucson, put up a 6.38 ERA, and was released. The Cubs signed him to a minor league deal and put him in Iowa. He made three starts for them, went 0-3 with a 13.50 ERA, and was released for the third time that year. With nowhere else to go, Oliver retired.

The next spring, a rather miraculous thing happened. Oliver decided to come back. The Mets took a chance, and what do you know, one of the Mets’ gambles actually paid off. Now a middle reliever, the 35-year-old Oliver pitched quite well. Five years later, he’s still going. Since being reborn in relief, Oliver has pitched 280 games with an ERA of 3.10 in 345.1 innings. His walk rate, always problematic as a starter, has been a fine 2.5 per nine innings. Strictly a middle man, Oliver has all of one save in that time, but he’s converted 84 percent of his hold/save situations, going 20-6 with 57 holds. Lefties have hit .237/.379/.394, and more impressively, right-handed batters have hit only .241/.308/.356. The only negative is that he hasn’t excelled at stranding inherited runners, although he’s done quite well in that department this year.

Oliver isn’t going to the Hall of Fame, and chances are no one but baseball card collectors will remember his name two minutes after he retires. Yet, he is more memorable than many of the more talented, more consistently successful players who will get plaques. Oliver failed, struggled, won. He’s been living on borrowed time for five years. That’s a more admirable tale than that of, say, Manny Ramirez, who has sleepwalked through a 20-year-career on pure hitting talent. Give me the self-made man.