Let’s face it, there’s no real drama left in the regular season for the New York Yankees. With just 22 games left to play, the closest team that could eliminate from from the playoffs (the White Sox, who are now a half-game ahead of the Red Sox in second place in the Wild Card race), is eight games back in the loss column. Sure the Yankees could miss the playoffs, but they won’t. 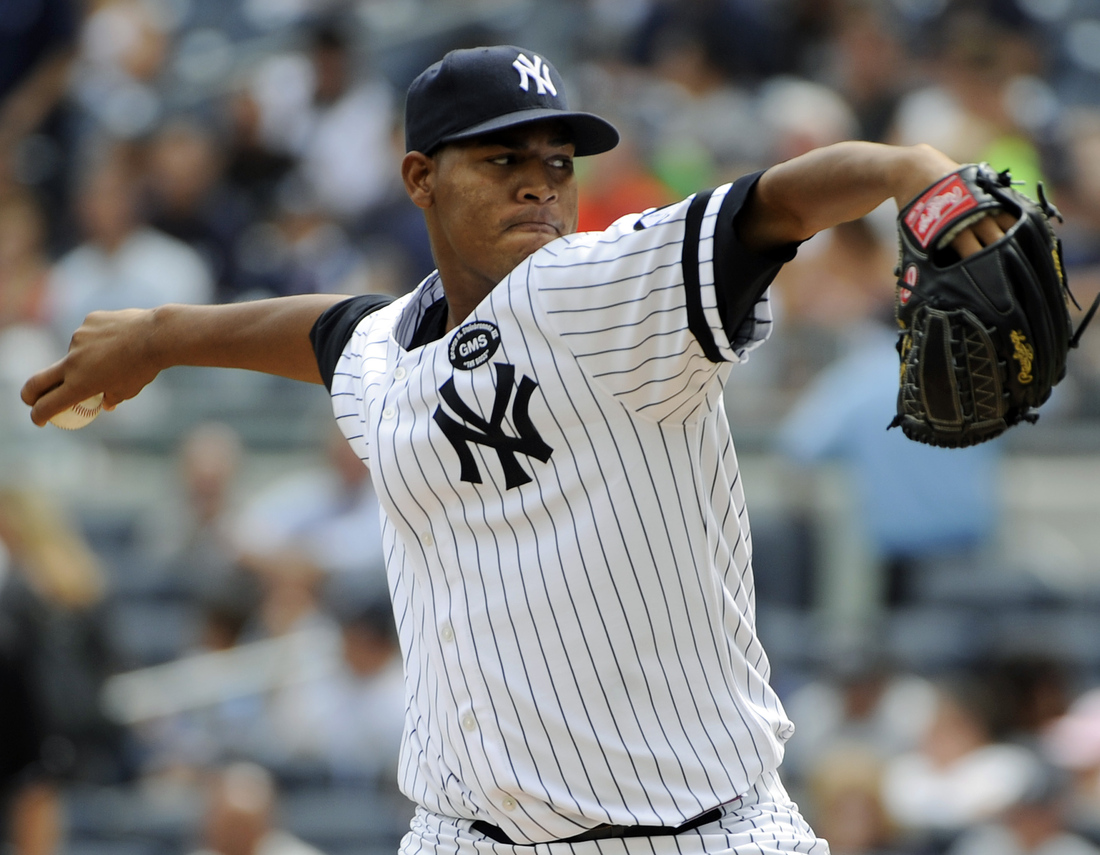 Looking toward the postseason, the Yankees have some major concerns about their starting rotation, but Steve has already done good work on that topic, and there's only so much the Yankees can do beyond massaging the seven contenders for those four spots and hoping someone behind CC Sabathia enters October on a hot streak.

I do have one bit of news to break to you all on that front, however: A.J. Burnett will be in the postseason rotation.

Think about it. Even if Andy Pettitte picks up right where he left off upon being activated (which could happen as soon as five days from now as Pettitte is making a rehab start in Game Two of the Double-A Trenton Thunder's current playoff series today), the Yankees still have two spots in their postseason rotation to fill behind lefties Sabathia and Pettitte. Of the five candidates for those two spots, only one has taken his turn every time he was healthy enough to do so this season, and that's Burnett. Javy Vazquez has been twice pulled from the rotation. Phil Hughes has been skipped twice (or will be when Dustin Moseley takes his turn on Sunday, pushing Hughes' back Wednesday) due to an approaching innings limit. Moseley has been a mere fill-in for Pettitte and now Hughes, and Ivan Nova is a rookie with just four major league starts under his belt. No matter how poorly Burnett has pitched, he's been back out there five days later, the only exception coming when back spasms pushed A.J. back three extra days in early August. The Yankees might use Vazquez, Hughes, Moseley, or even Nova out of the pen. The might even leave any one of those pitchers off the playoff roster altogether, but Burnett will be in the postseason rotation, for better or worse. Count on it.

As for that fourth spot, Brian Cashman told YES's Jack Curry on Tuesday that Ivan Nova wasn't really being considered, but with Vazquez struggling again in his return to the rotation on Saturday, Hughes clearly tiring (even if he won't admit it or doesn't realize it), and Dustin Moseley being, well, Dustin Moseley, doesn't Nova have to enter the discussion, particularly after his performance on Wednesday?

Sure, he was facing the Orioles, who are not a good hitting team, and yes that was only his fourth major league start, but the Yankees aren't going to have a dominant fourth starter no matter whom they choose, and Nova has been able to keep the Yankees in the game in each of his starts thus far, the last three of which ended in New York victories. I'm not saying Nova should be in the postseason rotation right now, but given his solid 3.32 ERA and 2.67 K/BB in four starts, he should absolutely be in the discussion. (That said, he very likely is. I suspect Cashman was playing coy with Curry. He did tell Curry he didn't want to put that kind of pressure on the kid after just three major league starts, and I suspect his publicly keeping Nova's name out of the discussion for now is for that reason alone.)

Beyond the postseason rotation, the big news of late has been injury related. Alex Rodriguez and Lance Berkman are back and both have brought their bats with them (Alex is 5-for-12 since being activated, Berkman is 8-for-18). The doctors scanned Jorge Posada's head and found nothing, though he's still dealing with concussion-like symptoms after being hit by a foul-tip in Tuesday night's game. Alfredo Aceves, meanwhile, will not return this season (which could be good news if he takes this opportunity to have successful back surgery that could restore him to full strength for next year), and Damaso Marte is unlikely to, either. 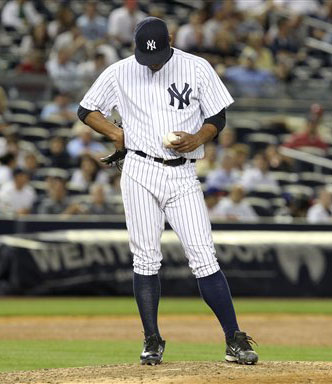 Damaso Marte wonders why this obstinate little white orb won't do what he wants it to. (AP)

Per LoHud's Brian Heyman, Marte is dealing with "some sort of labrum issue" in his pitching shoulder and "feels he's just at 40 percent." Said Marte, "I don't know what I have in my shoulder. I feel sore." Marte isn't ruling out a return for the postseason, but based on that, I'm ruling it out for him.

Upon hearing that news, I thought, "oh, well there's not much to write about right now, but I could take this occasion to wrap up the Marte/Xavier Nady trade." Then I realized Marte is signed for another year with an option for 2012. ¡Ay, caramba!

In actuality, the Yankees' return from the Pirates in that trade ran out when Xavier Nady, who was acquired with Marte at the 2008 trading deadline,  underwent season-ending Tommy John surgery in mid-2009. The Yankees declined Marte's 2009 option after the 2008 season prior to resigning him for $12 million over the next three seasons, and Nady became a free agent after the '09 season.

Despite posting a 5.40 ERA and walking ten men in 18 1/3 innings, Marte was worth about a half a win to the Yankees in the final two months of the 2008 seaosn according to WXRL (Baseball Prospectus's cumulative win-expectancy-based stat for relief pitchers), while Nady was worth just shy of a win according to BP's WARP (wins above replacement player, which combines hitting, fielding, and baserunning). For that win and a half, which wasn't enough to lift the Yankees into the postseason, the Yankees gave up a trio of marginal 25-year-old righties and struggling 19-year-old outfield prospect Jose Tabata. Here's what those four team-controlled players have produced for the Pirates since (using WARP and a combination WXRL and SNLVAR, which is essentially WXRL for starting pitchers)

I'm comparing two-plus seasons to two months here, but then that's what the Yankees gave up in making that deal, multiple team-controlled years for a short-term fix that didn't work. The caveat is that the Yankees needed to clear space on their 40-man roster and in their system in advance of that December's Rule 5 draft. Then again, the players they added to the roster that November were righties Steven Jackson, Anthony Claggett, and Christian Garcia and lefty Michael Dunn, none of whom are still in the organization and who combined for 6 2/3 innings with the major league team before their respective departures (Garcia was released earlier this year after requiring a second Tommy John surgery, Jackson and Claggett, curiously, each ended up with the Pirates via waivers, Dunn, it could be reasoned, netted Boone Logan in the Javier Vazquez deal, so that's something).

Of course, the real question is, would any of these guys really have gotten a chance to play for the Yankees? I'm not convinced. Given the Yankees rotation situation, Ohlendorf, who has posted a 3.98 ERA in 50 starts for the Bucs the last two years, looks compelling, but he's hardly a lost gem, and he's easily been the best of the three pitchers in the deal. As for Tabata, he looks a lot like a less athletic Austin Jackson (read: average without much power or patience), and with Tabata's attitude and personal problems and Jackson still in the pipe, I didn't have any problem dealing him then and still don't.

As for Marte's ensuing three-year, $12 million deal, here's what I wrote when he signed it:

I would have understood if the Yankees had picked up Marte’s [$6 million] option, using him as a hedge against coming set-up man Mark Melancon or against a second look at lefty Phil Coke in the major league pen. I would have understood a two year deal at a reduced salary, which would have allowed the team to trade Marte either at the deadline or next winter. Three years plus an option? That I don’t get. Not when the option would be for Marte’s age-37 season. Not given that bit of elbow trouble in August. Not given all of the pitching already in the Yankee system.

Well, two-thirds of the way through that deal, Marte has thrown a grand total of 31 regular season innings with a 6.39 ERA and has cost the team a half a win relative to a replacement-level pitcher with negative WXRLs in both seasons.

However, Marte also retired all 12 batters he faced in the 2009 ALCS and World Series, arguably triggering the "flags fly forever" exception in his player evaluation protocol. The question then becomes, how big were those outs?

Well, five of them came in games the Yankees lost. Four more came with a four-run lead in the eighth inning, a low-leverage situation, even if he was facing the heart of the Phillies order. He retired Ryan Howard for the third out while protecting a two-run lead in the seventh inning of Game 4 of the World Series. That wasn't nothing, but the lead wasn't in danger, either. He struck out Chase Utley with two men on base to end a threat in the seventh inning of Game 6. That wasn't nothing, either, but again he had an extra run to work with.

As it turns out, Marte got an out with the tying or winning run on base or at the plate just once in the 2009 postseason, that coming in Game 2 of the ALCS against the Angels when he retired home-run threat Kendry Morales with no one on base in the 12th inning of a tie game. Every out is important, but Marte only got one that could arguably be said to have been crucial to the Yankees title run. That's not worth a three-year deal at any price and neither was, nor is, Damaso Marte, who we'll unfortunately still be talking about next year in his age-36 season.