The Yankees ultimately pulled out a win on Wednesday afternoon via Nick Swisher's walkoff home run, but for the first eight innings, the team could scarcely buy a run against the Orioles. Ultimately one play loomed particularly large in the game, and the Yankees can only hope it won't become an even larger problem for their season. 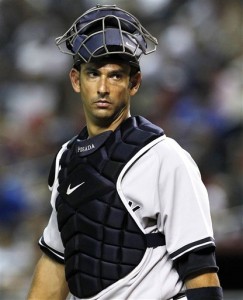 The Yankees can ill afford to lose Jorge Posada down the stretch, but his concussion scare rates as a major concern (AP).

With two outs in the seventh inning, the Yanks had runners on first and third base thanks to singles by MVP candidate Robinson Cano and Glenallen Hill Historical Re-Enactment Society Chairman Marcus Thames. Francisco Cervelli was due up, and it was logical to expect Joe Girardi to call Jorge Posada's number as a pinch-hitter — particularly as the Yankee skipper had just illustrated his sensitivity to matchups by tapping Thames to pinch-hit for Curtis Granderson with lefty Mark Hendrickson on the hill (a move immediately neutralized when Buck Showalter went to righty Jim Johnson). When he didn't use Posada, radio's John Sterling was "flabbergasted," as were the TV crew of Michael Kay and Ken Singleton, and the Yankee-flavored Twitscape erupted in outrage. Bronx Banter's Emma Span may have summed up the reaction best: "Joe Girardi could've run onto the field naked & done the Macarena & the Twitter reaction would be kinder than to batting Cervelli there."

Cervelli, as you'll recall, has been rather light with the stick for quite awhile, hitting .207/.284/.264 since June 1. Even with Posada unavailable for some reason — having played in three straight games, it wasn't out of the question — the expanded September roster would have allowed Girardi to call upon Colin Curtis to pinch-hit and then deploy Chad Moeller as a defensive replacement. But noooooo. Cervelli hit for himself, and more exasperatingly, grounded out on his first pitch to end the inning.

As it turns out, Girardi had a fine excuse not for batting Posada, who according to reports exhibited concussion-like symptoms after taking a foul tip off his mask Tuesday night. He had actually gone to see a neurologist by the time of the fateful Cervelli at-bat.

Sadly, concussions have become a Very Big Deal in professional sports in recent years as their devastating and harrowing long-term effects have come to light. Among football players, they've been implicated in the onset of dementia. On the diamond, they're thought to be the real cause of what's previously been accepted as amyotrophic lateral sclerosis, a/k/a Lou Gehrig's Disease, at least according to one recent scientific paper. Concussions have ended the careers of players such as Brewers' third baseman Corey Koskie, who collided with a wall while attempting to catch a pop-up in 2006, and Giants' catcher Mike Matheny, who was forced into retirement in early 2007 as a result of the cumulative effect of all the foul tips he took in the mask — a situation that rings a bell both literally and figuratively as far as Posada is concerned.

Other players such as Jim Edmonds, Ryan Church, Justin Morneau and Jason Bay have been forced to the sidelines for extended and maddeningly indefinite periods of time due to concussions and their aftermath, the poorly understood post-concussion syndrome, which can include headaches, nausea, dizziness, fatigue, loss of memory, insomnia... a potpourri of misery. Cardinals' manager Tony La Russa basically impugned Edmonds' manhood while the latter recuperated, and Mets manager Jerry Manuel similarly made a hash of Church's situation to the extent that his club came under well-deserved fire for their general handling of such cases.

The tide may have begun turning over the past few years as teams have recognized concussions as threats to players' long-term well-being. Morneau hasn't played since taking a knee to the noggin while attempting to break up a double play on July 7, and Bay is apparently done for the year, though only after the Mets were slow to react to his having collided with a wall in late July; he played two games before complaining of symptoms following a cross-country flight.

The Yankees haven't been immune to concussions, either; it was after suffering one via a beaning during spring training that Cervelli donned the oversized "Great Gazoo" batting helmet designed to better cushion the head upon impact — a piece of equipment the Mets' David Wright shunned after being ridiculed for wearing one in two games last year following his return from a beaning.

Reportedly, Posada has been cleared to resume playing after a battery of neurological tests; he's listed as day-to-day, but then, aren't we all?. Sadly, his clearance hasn't brought quite as much relief as the famously funny headline about Dizzy Dean after being hit in the noggin by an errant throw ("X-Rays of Dean's Head Show Nothing"). Post-concussion symptoms can take days to manifest themselves, and as Bay's case showed, the pressure changes caused by airline flight can bring such symptoms to the fore (an issue that merits further study, particularly given what's at stake when multi-million dollar athletes are affected by such issues).

The 39-year-old Posada is fragile enough as it is without the Yankees having to worry about the shape of his head, and the team's lack of immediate depth at the position — no, Jesus Montero isn't coming to town because of this — makes this an even bigger concern, so add that to the pile of stretch-drive worries, along with Derek Jeter's slump and the ongoing rotation problems. Don't be surprised if the Yankees tread with extra caution here — get used to more Cervelli — and don't blame Posada if he decides he's suddenly not up to the task of playing, even having been granted medical clearance. It's his livelihood and his quality of life that's at stake here; he's the one who's gotta live with that head.