Champagne Super-Nova (The Orioles are Bob)

Share All sharing options for: Champagne Super-Nova (The Orioles are Bob) 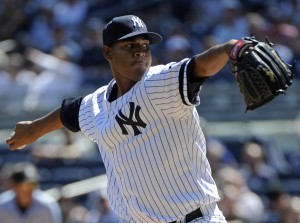 In previous posts, I asked Ivan Nova where the strikeouts were and he upped the ante today, whiffing six Orioles in six innings. You could say, "Yeah, but it’s the Orioles. So what?" but you wouldn’t be giving the Baltimoreans enough credit. Despite the Birds’ many flawed feathers, they don’t strike out a lot. They also don’t walk a lot, which is the price they pay for their see-ball/hit-ball philosophy. If you don’t work deep counts, you avoid the Ks but also don’t get the free passes. It’s a bit like that line in Sondheim’s "Company:" "You know, a person like Bob doesn't have the good things and he doesn't have the bad things, but he doesn't have the good things either." That’s the Orioles. The Orioles are Bob.

Thus, we should give Nova full credit for sending Nick Markakis, Luke Scott, Ty Wigginton, and Felix "The Man of the Flaming" Pie (the latter two twice each, and yeah, I know it doesn’t quite work, but I fit in my Beatles references where I can) back to the dugouts carrying their bats. (Someday there will be a baseball-themed version of "300" in which the wives of the team from Sparta, Illinois tell their husbands, "Come back without your bat, or on it." Which also doesn’t quite work, but who the heck would make a baseball-themed version of the "300" anyway?) Still, whereas the Orioles make contact, they are still not good hitters on the whole, and one would like to see him show similar stuff against a better club. Assuming that the juggling of Phil Hughes’ remaining starts doesn’t upset the schedule overmuch, Nova should get his chance to shine brightly against the Rays and Blue Jays before the season is out, a far better test of his postseason worthiness.

As for Nick Swisher, it’s about time that someone showed on offense showed some life. Eleven runs in four games is far less than this lineup is capable of, with their bats, without their bats, or on them—whatever that means. As Batman said, "Think clean thoughts, chum."

Speaking of clean thoughts, Jay Jaffe will have more on what is perhaps the bigger story out of the Yankees today, Jorge Posada's post-concussion syndrome. What gaineth a team if it gains a Nova but loses its Hall of Fame-level catcher? If the alternative is Quick-Out Cervelli, not much at all.