Share All sharing options for: Robinson for MVP: Cano? Should-o?

With apologies for what is easily the worst headline I've penned in my short time as part of the Bible Study Group... 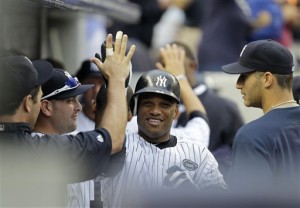 Robinson Cano's had plenty to celebrate thus far this year, but he may not take home the hardware (AP).

With the final month of the season underway, talk of which players are worthy of the big awards has heated up. Not surprisingly, the team with the majors' best record has some dogs in the various hunts, and yesterday, Steve examined the biggest dog of 'em all, CC Sabathia, in his quest for the AL Cy Young award. Meanwhile, Cliff has been keeping tabs on the various awards races throughout the season, and last week, he provided a thumbnail look at both Sabathia and Most Valuable Player candidate Robinson Cano. Over at Baseball Prospectus, I have an update planned using JUMP (Jaffe's Ugly MVP Predictor), a rather unwieldy system I designed last year, but today I wanted to take a closer look at Cano's case for AL MVP.

Nearly every awards race is capable of producing controversy, and particularly when it comes to the MVP. Not only do the voters from the Baseball Writers Association of America rarely elect the player who is worth the most wins to his team via some objective formula, they appear to shift their standards from year to year, instead constructing narratives to fit whatever loosely-gathered facts are at hand. Defensive value is often minimized or entirely ignored in favor of heavy hitters with big Triple Crown stats, almost invariably from successful teams. Pitchers are usually excluded from the discussion because of the Cy Young Award's existence; I'll plead guilty as charged to the latter in the interest of comparing fruit to fruit if not apples to apples.

Unquestionably, the 27-year-old second baseman has the storyline, as one can argue quite convincingly that he's stepped up to become The Man for the Yankees while Alex Rodriguez, Derek Jeter and Jorge Posada have struggled with injuries and age, and while Teixeira has spent the year digging himself out of an early-season hole. Cano hit a searing .400/.436/.765 in April to pick up Teixeira's .136/.300/.259 flatline, and he's batted .329/.412/.624 in 22 games at the cleanup spot with Rodriguez either on the bench or the disabled list, a major reason why the Yanks entered Friday 19-4 in games without A-Rod in the lineup. If nothing else, he is the Bronx Bombers' MVP. Strengthening his case at least from the subjective standpoint is the fact that Cano has drawn plenty of acclaim for his defense as well.

The numbers show Cano has enjoyed a breakout season. His .321/.385/.554 performance (through Thursday) not only places him in the top 10 in all three triple-slash categories — fifth in batting average, 10th in on-base percentage and eighth in slugging percentage — but also ranks as career highs in the latter two marks, and important yardsticks in his development. Cano has become both a more feared hitter and a more selective one; Monday's home run, his 26th, set a new career high, and he's already surpassed his personal bests for walks both unintentional (38) and intentional (12, fourth in the AL). He's still not walking as much as a truly patient hitter such as Teixeira; the latter is drawing unintentional passes in 10.9 percent of his plate appearances, compared to Cano's 6.6 percent, but still, his rate is his best by about 30 percent.

Needless to say, whether one uses OPS, OPS+, wOBA or True Average, Cano's significantly beyond his previous career bests as well. I'm partial to TAv, which does a better job of valuing walks than OPS or OPS+ do while putting a player's per-out production on the scale of batting average. Cano's .313 mark leads the team and ranks fifth in the league among batting title qualifiers. Minnesota's Justin Morneau, who hasn't played since July 7, no longer has enough PA to qualify, and the same is true of Boston's Kevin Youkilis.

As impressive as his accomplishments may be, Cano's got plenty of competition in the MVP race. The Rangers' Josh Hamilton, the Tigers' Miguel Cabrera, the Blue Jays' Jose Bautista and the White Sox's Paul Konerko — the four full-season players with higher TAvs — have cases to be made both from the subjective and objective standpoints, and it's worth including the Rays' Evan Longoria, the Twins' Joe Mauer and the Red Sox's Adrian Beltre, all of whom come from contenders and have TAvs above .310, in the discussion as well. Hamilton, the offensive centerpiece of the team running away with the AL West, leads the league in batting average by a wide margin at .361 and is fourth in the home run race at 31. Cabrera is second in batting average, tied for second in homers, and first in RBI while walking the straight and narrow path after an ugly, alcohol-marred end to 2009, Bautista is the surprising major league leader in homers and is second in RBI, Longoria's the best player on the team with the second-best record in baseball… Hell, it's probably better that I do a table with their basic numbers:

Going purely by the lumber, the award should belong either to Cabrera or Hamilton, with the former being at a tremendous disadvantage because his team is two games below .500 at this writing; only once since the 1994 players' strike has a winner come from a sub-.500 team (A-Rod with the Rangers in 2003).

Of course, it's unfair to base the conversation simply on offense; the MVP award should take into account defensive value, so towards that end, here are the above eight candidates ranked by averaging three competing valuation metrics. WARP is Baseball Prospectus' Wins Above Replacement Player, while the two WAR figures represent Baseball-Reference's and Fangraphs' dueling methodologies for computing Wins Above Replacement via different defensive metrics and theoretical frameworks. "Wins" is the average of the three:

WARP and fWAR both say Hamilton's the league leader, while bWAR says Cano. In the aggregate, the Texas left fielder comes out nearly a full win ahead of the rest of the pack even after adjusting for hitting environments and accounting for the difference in value between playing a difficult up-the-middle position and an easy corner outfield one, both important considerations. Cano ranks fourth overall, third if you exclude Cabrera because of the losing team factor. Because of that, it's difficult to make the case that he should win.

Whether he will win may be another story, quite literally. As a group, the BBWAA voters' standards as to what constitutes an MVP tend to shift from year to year. Furthermore, they tend to be rather wary of sabermetrics, so it's unlikely that most of them will be using the leaderboards in the above valuation metrics as their guide. Also worth noting is the fact that the voting body isn't exactly in awe of the Yankees. During their long run of excellence — 14 postseason appearances, seven pennants and five world championships in 15 years — A-Rod is the only player to win an MVP while wearing pinstripes; he's done so twice, in 2005 and 2007, with overwhelming offensive numbers in years the team didn't have the best overall record, perhaps suggesting that the voters valued him as the difference between the Yankees making the playoffs or not.

I've said many times in radio hits or while watching games with friends that Robinson Cano would get my vote for AL MVP. He's had a spectacular season on both sides of the ball, and it's been a joy to watch him fulfill his potential, but looking at the numbers and the recent precedents, it's anything but clear either that he should win or that he will win, at least as we head into the home stretch.