Cutting the Legend of Homer Bush Down to Size

Share All sharing options for: Cutting the Legend of Homer Bush Down to Size

As a connoisseur of futility infielders — those versatile glove men who are almost invariably hapless with the stick — I've always had a soft spot in my heart for Homer Bush. His name combines two great colloquialisms related to the national pastime (or, as some have argued, two great national pastimes), and he was a member of the 1998 Yankees, the best ballclub most of us have ever seen. 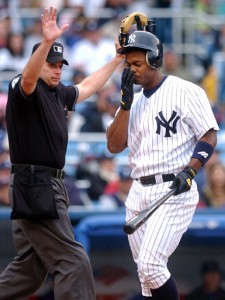 Homer Bush made the most of his time in pinstripes, though his worth to the team wasn't all that great (AP).

A 25-year-old infielder who was originally drafted by the Padres in 1991, Bush was in his seventh season of beating the bushes when he came to the Yankee organization as a bit player in a six-player trade which sent Ruben Rivera on the outbound train and Hideki Irabu on the inbound . After a late-season cameo in 1997, he spent the entire 1998 season with the Yankees, but appeared in just 45 games. He made the most of his playing time, primarily as Chuck Knoblauch's understudy and as a late-inning substitute, hitting a searing (if slaptacular) .380/.421/465 in 78 plate appearances thanks to an unreal .510 batting average on balls in play.

But in the popular imagination, Bush is less remembered for his hitting than he is for his baserunning, particularly by one Michael Kay. Several times in recent weeks, YES's lead broadcaster has invoked the memory of Bush's prowess as a pinch-runner; to hear him talk, it's like the Yankees had the second coming of Rickey Henderson on their roster, a superhuman speedster capable of derring-do on the basepaths. The facts don't exactly fit the legend, however.

Bush stole all of six bases in 1998 while being caught three times. He was 3-for-3 in his 12 starts, but just 3-for-5 in 18 pinch-running appearances (10 of which were for Chili Davis or Darryl Strawberry), and 0-for-1 when he stayed in the game after pinch-running (Kay's partner John Flaherty gunned him down in that one). He did score eight runs as a pinch-runner in those 18 opportunities, and the Yankees won all eight of those games, so it's easy to see where his presence might be seen as something of a good luck charm. But get this: none of those three pinch-steals came in those eight wins. Meanwhile, the Yankees went 5-5 in games in which he pinch-ran but didn't score, and only 1-2 in which he stole a base as a pinch-runner.

Baseball Prospectus has a stat called Equivalent Baserunning Runs, which measures not only the value of a player's contribution in the stolen bases and caught stealing departments but also his advancement on hits, groundouts, fly outs and other means (wild pitches, passed balls, etc). According to the numbers, Bush was worth 1.4 runs above average on the bases in 1998, the fourth-highest total on the team (Derek Jeter was first at 3.4 runs, and both Paul O'Neill and Chad Curtis had 1.5; Scott Brosius was last at -4.1 runs). That's a negligible contribution on a team that won 114 regular-season games. Looking at it another way, via the Win Probability Added stat found in his Baseball-Reference.com game log, Bush added 0.182 wins via his clutch pinch-running skills.

Bush did make five pinch-running appearances in the 1998 postseason, but again, the numbers aren't terribly convincing. He stole two bases, one in the Division Series and one in the League Championship Series, but didn't score on either occasion. The one time he did score a run, it was a ninth-inning insurance run in ALCS Game Four, when the Yankees already led 3-0.

Prior to the 1999 season, Bush would be included in the trade which sent David Wells to Toronto in exchange for Roger Clemens. He was the Blue Jays' regular second baseman that year, and enjoyed a strong season (.320/.353/421, with 32 steals in 40 attempts. The returns soon diminished; he was a part-timer in 2000 and 2001, drew his release from Toronto in early 2002 and caught on with the Marlins, went to spring training with the Padres in 2003 and was cut, and wound up his career with the Yankees in 2004, playing in nine games with the big club but spending most of the season at Triple-A Columbus.

The Legend of Homer Bush persists in Michael Kay's mind — and doubtless those of others — because the 1998 Yankees were a team for the ages with a great bench (Davis, Strawberry and Tim Raines being its primary weapons). Because they carried fewer pitchers in those days than they do now, Joe Torre had the fortune of employing an extra tactical weapon in this unassuming and otherwise seldom-used infielder/pinch-runner. Bush was like plush leather seats in a Cadillac, a luxury which gave the Yankees' championship ride an extra touch of style, but one which didn't help them get anywhere they weren't already going.