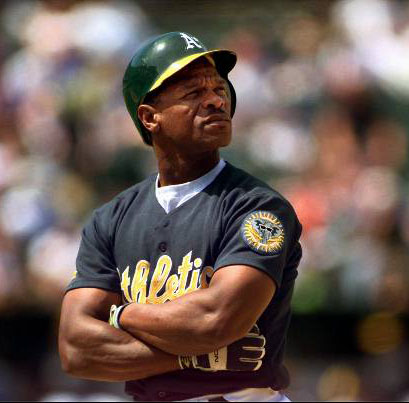 Rickey burned so bright the elephant on his sleeve had to wear shades. (AP)

In the first inning of Monday night's game, YES showed a graphic indicating that Coco Crisp's current streak of 14 stolen bases without being caught was the longest by a member of the A's since Rickey Henderson stole 15 in a row in 1998. Left unsaid was the fact that Rickey Henderson was 39 years old in 1998.

Did I mention he was 39 that season? Only four other players in the entire history of major league baseball have stolen 66 or more bases in the remainder of their careers after their age-38 season. Here's that list:

Forty-three-year-old Omar Vizquel has 54 steals in the last five seasons, but he has stolen just 11 in the last two seasons combined and is still a dozen short of Rickey's age-39 total alone.

As for Rickey, he stole 109 bases in his forties and had an appropriately off-the-charts 175 steals after the age of 38. Crisp, meanwhile, has stolen 159 bases in his nine-year major league career.