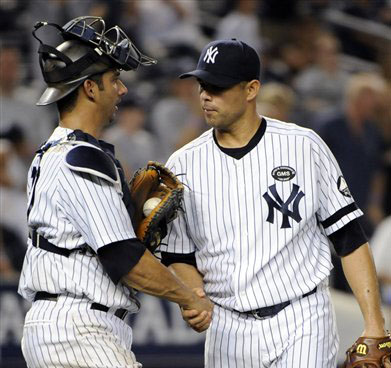 Following up on Steve's prescient post on the Yankees pitching predicament, I think we saw the Yankees' plan emerging in Tuesday night's game. With Javy Vazquez having thrown 70 pitches on Dustin Moseley's turn last night and having now pitched well in two long relief outings (combined line: 9 IP, 4 H, 2 R, 1 HR, 2 BB, 8 K), I fully expect Vazquez to take Moseley's start the next time through the rotation. That would give Vazquez two or three starts, the second of which could be skipped due to an off day, to prove himself before Andy Pettitte's mid-September return, at which point the Yankees can reevaluate how Vazquez, A.J. Burnett, Phil Hughes, and Ivan Nova have been pitching in order to determine whose spot Pettitte will take.

Also worth noting, Vazquez said after the game that he had made a small mechanical adjustment at pitching coach Dave Eiland's suggestion. He's now bringing his left leg further back toward second base when he begins his delivery in order to build more momentum toward the plate. It's comically simple, but whether it's actually giving Vazquez a bit more oomph behind his pitches, surreptitiously helping to put other aspects of his delivery back in line, or simply working as a placebo, something for Vazquez to focus on to clear his mind of negative or problematic overthinking (breathe through your eyelids, kid), it seems to be working.

At the same time, there's a danger in putting too much stock in garbage time relief against not only a weak-hitting team, but in the latter innings, the bench of a weak-hitting team. I agree with Steve that giving a hot hand from Triple-A Moseley's spot would be a better solution right now and for future seasons, but then an effective Vazquez, while elusive, is worth pursuing. I don't put much stock in Vazquez's poor showing in 15 2/3 postseason innings, most of which came in 2004 when he was hiding a shoulder injury. I'm more interested in his 2.76 ERA across 11 starts and 71 2/3 innings in the middle of this season.

Speaking of mechanical adjustments, I thought it would be worth revisiting Curtis Granderson's performance since Kevin Long's changes to his swing. Dating the changes to August 10, Granderson has hit .254/.347/.476 in 72 plate appearances with the new swing. Relative to his .240/.307/.417 season marks prior to the changes, that's certainly an improvement, but it still leaves Granderson somewhere between his 2008 and 2009 levels of production and the returns do seem to be diminishing (Curtis went 10-for-30 with three homers in his first 34 PA after the changes, but is just 6-for-33 with one dinger, his only extra-base hit out of those six, in 38 PA since). More encouraging is the fact that Granderson has hit .398/.476/.677 (7-for-18 with three walks and three extra-base hits) against lefties since the changes. The sample sizes here are absurdly small, of course, but they'll only get so large before Joe Girardi will have to make some key lineup decisions in games that really matter.