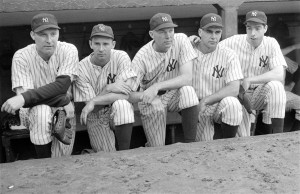 Chances are none of these propsects will be as good as Ruffing, Gordon, Dickey, Keller, or DiMaggio, but we track 'em anyway (AP).

The finals weeks of minor-league ball are upon us. The Gulf Coast League Yankees failed to make the playoffs, but there are five minor-league affiliates still in action. Here are a few quick hits on who performed well (or not so well) during Monday’s games, including updates on a couple of rehabbers.

Brandon Laird, 3B, Triple-A Scranton: 1-for-5, 2 K. A few weeks ago, when Laird was first promoted to Triple-A, it seemed as though he could do no wrong. He had been crushing Double-A offerings, and in his Triple-A debut, he mashed a couple more homers for good measure. Since then, it hasn’t been pretty. In his last seven games, Laird is 2-for-26 with nine strikeouts, giving him a miserable .215/.237/.312 line at Scranton. Of course, it’s a new level and the righty is still adjusting, but it hasn’t been the headlining performance fans hoped for after his Double-A exploits.

Alfredo Aceves, RHP, Rehabbing in Triple-A Scranton: 1 1/3 IP, 2 H, 1 R, 1/1 K/BB.. If Laird’s Triple-A line has been ugly, it’s Aceves’ rehab appearances in Double- and Triple-A have been hideous. At Trenton, Aceves tossed eight innings and allowed five earned runs, most of them coming on extra-base hits. Despite the poor results, the Bombers sent him to Scranton for more work. Though he didn’t allow any runs in 2/3 innings in his first outing, he did have two walks. In his next outing, he gave up two hits and two earned runs while walking two more. It’s great to see Ace working so hard to come back to the team, but it’s clear that something is not right with him.

Lance Berkman, DH, Rehabbing in Double-A Trenton: 2-for-5, 1 K. When the Yankees put Berkman on the DL, it seemed that they were looking to add some infield insurance and that he would be back in the minimum. His line from last night seems to back up that theory. Get ready to rev up the Dobermans to make sure he’s ready!

Slade Heathcott, CF, Low-A Charleston: 1-for-6, 1 HR, 2 RBI, 3 K. Clearly unhappy that I listed him as a white flagger earlier on, Heathcott has been hitting somewhat better lately (.237/.356/.447 in his last 10 games), and last night he hit a walk-off home run. The strikeouts are still troubling; in the last 10 games, he has been rung up 15 times. It beats him hitting into a double play, sure, but a whiff rate of Heathcott’s level is alarming.