Gardner vs. Crawford: The Debate Continues

Share All sharing options for: Gardner vs. Crawford: The Debate Continues 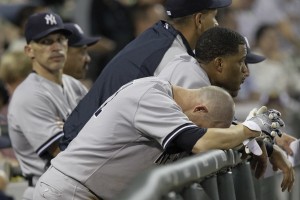 Brett Gardner: Can he feel Carl Crawford breathing down his neck? (AP)

Brett Gardner has been a different player since injuring his wrist at the end of June. Hitting .321/.403/.418 in 70 games to that point, he has hit only .233/.368/.327 since and has been considerably more reluctant to run—having made 29 stolen base attempts prior to the injury, he has gone only 15 times in 52 games since. His high on-base percentage means that you can’t quite call what he’s going through a slump, but it may also, paradoxically, suggest how much the wrist is still bothering him. In those first 70 games, Gardner took walks in 11.3 percent of his plate appearances. Since, he’s walked in 16.4 percent. While we laud the approach for its results, what we’re also seeing is a player increasingly determined to not swing. It’s not clear which Gardner is the "real" one going forward, but it’s clear that the current version is not the same one we saw through June.

Earlier this season, at about the moment Gardner got hurt, I asked if his performance had rendered the Yankees’ presumed pursuit of soon-to-be free agent Carl Crawford unnecessary. At that time, Gardner had outperformed the veteran; Crawford was hitting .310/.373/.488 when Gardner got hurt. His superior extra-base abilities didn’t quite close the gap created by Gardner’s greater patience, while his four-steal advantage came at the cost of three additional caught stealing.

Since Gardner’s wrist was damaged, Crawford has had the advantage on Gardner, though not quite as decisively as you might think. In 50 games from July 1 to present, he has hit .276/.310/.458 with 13 steals and one caught stealing. Crawford still hits with more authority than Gardner—almost everyone does—but his aggression has, at least in this phase of his career, made him below-average at getting on base. You might think that this urge to swing might be a consequence of his recent move to the third spot in the order, down from his traditional number two, but Crawford’s career OBP is only .336, which is about league-average for 2002-2010, the years of his career (the league OBP is .329 this season).

By most measures, Crawford is having his best season this year, but only by a little bit. With the exception of his 2008 injury season, he’s been very consistent since coming into his full powers in 2005. His overall rates for that span are .301/.345/.459, and this year’s total performance is virtually indistinguishable from those other seasons. That is one huge advantage that he has over Gardner: a buyer knows what he’s going to get. All we know of Gardner is that he had a nice three months, a bad two months, and currently has a nice little five-game hitting streak going (7-for-16) that may or may not augur a return to his earlier form.

We also know this about Crawford: he’s a much better hitter at home and on turf (one and the same for the Rays) than he is on regular surfaces. His career road rates are .286/.327/.422. If that’s how he would hit as a Yankee, Brian Cashman would be better off deleting his agents’ phone numbers from his cell phone. This is especially true if it would take something like a five-year deal to sign Crawford. That would buy the acquiring team his age-29 to age age-33 seasons. Show me a .286 hitter with limited power and patience, declining speed, and therefore a resultant drop in infield hits (16 percent of Crawford’s career hits have been leg hits; without them, he’s a .260 hitter) and I’ll show you a team that just signed the latest iteration of Mets-era Vince Coleman. Crawford may be more valuable to the Rays and for the Rays than he would be with almost any other team.

Given Gardner’s patience, speed (reluctant basestealer or not), and defense, if he can continue to hit as he has overall this year—not his great spring numbers nor his poor summer numbers, but the aggregate .286/.389/.382—he will continue to be quite valuable, and might even outperform Crawford given the latter’s likely diminished results in another ballpark. Given his age (26) and overall profile, Gardner should probably be allowed to depart when he reaches free agency, but that date is five years away. Until we see if he finishes the season in the strong form we can keep an open mind, but for now Gardner seems the better long-term bet than Crawford.