Down and Out in L.A.

Share All sharing options for: Down and Out in L.A. 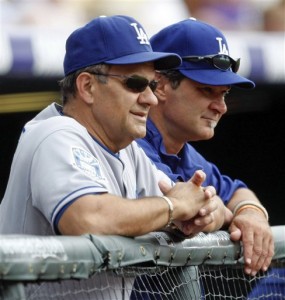 It's been a rough season in Los Angeles for this pair of familiar faces (AP).

As you no doubt heard if you were watching or listening over the weekend, the backdrop to the Yankees taking care of business on the south side of Chicago was the White Sox's attempt to pry Manny Ramirez loose from the Dodgers. Hours after the series ended, the Sox were awarded the dreadlocked 38-year-old slugger via a waiver claim. They'll pick up around $4 million in remaining salary, most of it deferred, an expensive lottery ticket for the postseason given that they entered Monday 4 1/2 games back in the AL Central, with an 8.9 percent chance of making the postseason according to Baseball Prospectus' Playoff Odds.

Some big-name writers have circulated the meme that Ramirez once again quit on a team in the midst of a race, but while it's true that he made just 54 starts in the team's 131 games due to three separate trips to the disabled list, he's not the culprit. As I argued over at my own site — with some colorful language, so caveat emptor — it's old friend Joe Torre who quit on the Dodgers by failing to play Ramirez when available, the latest in a litany of sins which hint that the former Yankee skipper could be on his way out.

Torre was the toast of Tinseltown after taking the Dodgers to the National League Championship Series in his first two seasons, the first time the team had managed that feat since 1977-1978, a pair of years in which they fell to the Yankees in the World Series and not coincidentally also Hall of Fame manager Tommy Lasorda’s first two years at the helm (I know these facts like the back of my hand, having grown up a Dodger fan during this era). This year hasn't gone nearly as well for Torre and the Dodgers as 2008 and 2009 did, primarily because the team was handicapped at the outset by the pennywise poundfoolishness triggered by the divorce proceedings of owners Frank and Jamie McCourt. Over the winter, McCourt hamstrung the Dodgers by not allowing GM Ned Colletti to offer arbitration to free agents Randy Wolf and Orlando Hudson, then failing to replace them adequately as they cut payroll.

Torre, who let a one-year contract extension offer dangle in the face of this mishegoss, may have privately seethed, but he’s publicly bitten his tongue, a wise move if he wished to ingratiate himself to his employers but not one that’s served the team's competitive interests. A Hall of Fame-bound manager of his stature could and probably should have thrown his weight around by vocalizing, say, the Dodgers’ need for another proven starting pitcher.

Torre hasn’t exactly covered himself in glory elsewhere this season. He's made a hash of the bullpen at times, failing to get closer Jonathan Broxton save opportunities early in the year, then overusing him in non-save situations. Worse, he quickly burned out his top setup men, a tale that will be all too familiar to Yankee fans. Righty Ramon Troncoso and lefty George Sherrill made a combined 28 appearances in April and another 25 in May, a pace that comes out to 168 combined appearances over the course of the season; not coincidentally, that not-so-dynamic duo has combined for an 8.06 Fair Run Average while each facing demotions to the minors. To be fair, the Dodger bullpen ranks third in the league by BP's advanced metrics, but those quality arms may be in Proctorville by the time the season is all said and done.

Worse, the young, homegrown players on whom so much of the Dodgers' present and future depends have regressed on Torre's watch. Catcher Russell Martin, first baseman James Loney and center field Matt Kemp have played mediocre ball for most of the season. The production of Martin, who once looked to be the Dodgers’ answer to Derek Jeter — a face-of-the-franchise leader — declined for the third straight season before it ended abruptly due to a hip injury earlier this month. Torre's overuse — starting him behind the plate 271 games in 2008-2009, the third highest total in the majors, and using him in 298 overall, the highest — can't help but be implicated in that decline; as a former catcher himself, he should have known better, particularly as Martin’s production flagged. After earning All-Star honors last year, the still-raw Kemp has at times suffered from braindead play at the plate, in the field and on the basepaths. After some heavy-handed benching by Torre which was accompanied by unsubtle comments from henchman Larry Bowa, Kemp appears to want to talk his way out of town if he can't play his way out.

Finally, there's Torre's handling of Ramirez, who at .311/.405/.510 still rates among the game's top hitters; his .328 True Average would rank third in the league given enough plate appearances to qualify. Around his injuries, he started just 54 games out of the 72 games for which he was active, meaning that Torre didn't start him a whopping 25 percent of the time — about double what you might expect for an aging player of his caliber. The Dodgers went 32-22 in his starts, scoring 5.3 runs per game, and 35-42 in games he didn't start, averaging 3.7 runs. Four of those non-starts came in the days immediately after Ramirez hit the waiver wire, three of them against the Rockies, the team directly above them in the NL West standings.

As the settlement of the waiver claim went about its glacial pace — Ramirez’s no-trade clause and the amount of money remaining constituted obvious obstacles to surmount — Torre tried to have it both ways, suggesting an urgency to the games against their rivals but not fielding his best available lineup, playing slaptastic Scott Podsednik in the slugger's stead. As I wrote at Baseball Prospectus yesterday:

Claiming that the decision for the benching was his and not on orders from the front office, and that he was "trying to win games," Torre shoveled more manure in the space of four days than he had in 13 years at the helm of the Yankees. "This is just my dumb move," he told Los Angeles Times beat reporter Dylan Hernandez, fumfering disingenuously about getaway days, the big outfield of Coors Field, team chemistry, and the speed of Podsednik. "There's no reason I can give you that makes sense. A lot of what I do is a feel thing." Somewhere, Orlando Hudson nodded silently.

Alex Rodriguez could probably relate as well. The end result is that either Torre's acting as the henchman for the front office or going on a gut instinct which is demonstrably antithetical to winning baseball, since the difference between the two hitters — about a quarter of a run per game according to BP's Marginal Lineup Value Rate stat (MLVr) — is too large to be made up with the glove. Either choice is a long way removed from Torre's days as the Yankees' skipper, because for once his attempt at accountability rings false. Say it ain't so, Joe.

Given that the 70-year-old Torre's contract is up at the end of this season, the aforementioned litany suggests he's either lost his touch or his team — not an uncommon occurrence for managers of a certain age, which is worth remembering for anyone still pining for Torre's pinstriped days — and is unlikely to return. Torre has said that he'll decide his fate by Labor Day but won't reveal his plans until the Dodgers' playoff fate (or lack of same) is clear — a day that's rapidly approaching given that the team entered Tuesday nine games back, with just a 4.1 percent chance at the playoffs.

Which brings us to the question of his potential successor, another man with Yankee ties, current Dodgers hitting coach Don Mattingly. Back in the spring, the buzz around the game was that Donnie Baseball was the heir apparent to Torre; Mattingly himself confirmed that the team had made overtures towards that end, albeit with 2012 in mind.

The problem is that Mattingly has never managed at any level, a fact that hurt him when he lost out to Joe Girardi for the Yankees' job following the 2007 season, and one that’s continued to dog him in his rare opportunities to take the wheel this year. His lack of experience showed when while serving as acting manager in the wake of a Torre ejection he became the victim of a bizarre rules mix-up involving a second mound visit (the Donnie Double-Dip Debacle, we called it back in my day). Mattingly and the Dodgers certainly got a raw deal in that game, but as manager he should have had the presence of mind a) to not make the mistake in the first place; and b) to register an official protest immediately, which would have allowed the game to be reset to that point if indeed the league ruled an incorrect call had been made (think: the George Brett Pine Tar Game). Furthermore, while managing the team during an exhibition game in Taiwan this past spring, Mattingly also made a mistake with his lineup card, resulting in the Dodgers batting out of turn — an embarrassing gaffe.

Those mistakes may have turned the tide against Mattingly’s eventual coronation. Over the past two weeks, both USA Today's Bob Nightengale and SI.com's Jon Heyman have suggested that Tim Wallach, the manager of the Dodgers' Triple-A Albuquerque affiliate, has leapfrogged Mattingly as the favored son. Wallach's got longstanding ties with the city and the team as well as managerial experience; up until the July 31 trading deadline, he also had a son playing in the organization, just as Mattingly still does — though to call 2006 supplemental first-round pick Preston Mattingly's career flatlining would be generous; yours truly has as much chance of playing for the Dodgers at this point.

Even if Torre departs and Wallach winds up getting the call, Mattingly could still find himself managing somewhere. In one of our staff confabs back at the mythical Pinstriped Bible hideaway (can't tell you where it is, kids — it's secret) colleague Cliff Corcoran suggested he might be a better fit with the Cubs given his area ties (he's from Evansville, Indiana) and the possibility of being closer to his family. Sure, that's probably a longshot, but hardly much more of one than the idea of Girardi (or even Torre) calling Wrigley Field home next year. Come to think of it, that’s a scenario via which Donnie Baseball would then find his way back to the Bronx as the managerial carousel goes round and round and round and round...