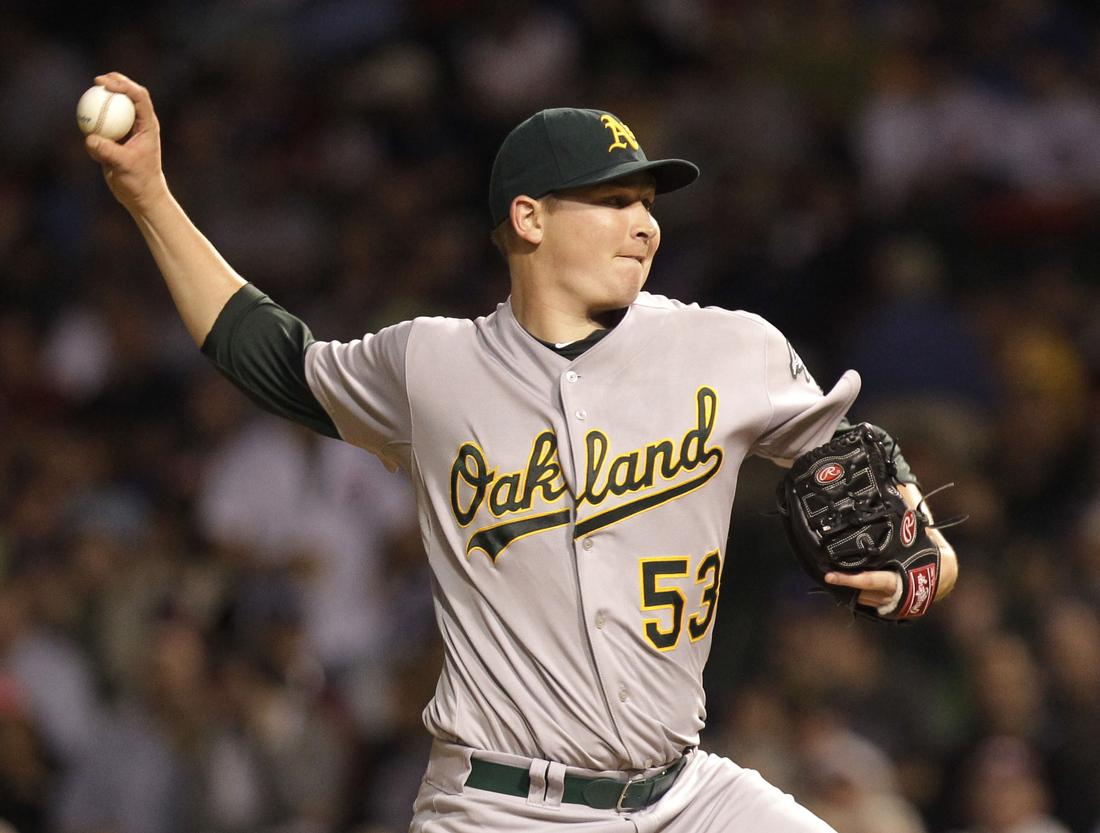 The A's young rotation led by 22-year-old Trevor Cahill, who starts tonight against Dustin Moseley, gives Billy Beane something to build around in Oakland (AP)

I was pretty hard on the A's in my previews of the Yankees' last two series against them, but with the smoke beginning to clear from an injury-riddled season, one can begin to see portions of Billy Beane's plan coming together.

True, his $10 million gamble on Ben Sheets was a bust as Sheets not only didn't pitch very well, but went down with a season ending arm injury (shocking!) just before the trading deadline, scuttling what was surely Beane's plan to cash in the veteran righty Matt Holliday-style. The Holliday trades are also looking problematic as Carlos Gonzalez is putting up a near-MVP quality season for the Rockies at age 24 (though in typical Rockies fashion, he's doing almost all of his hitting at home), while the ultimate result of those trades, former Phillies prospect Michael Taylor, is just two months younger than Gonzalez and hitting .263/.342/.381 in Triple-A. Still, if you look at the A's starting rotation, you can see what Beane has been up to.

With veterans Sheets and Justin Duchscherer out for the season, and thus failing to earn the incentives in their one-year contracts, the A's rotation is composed of five young arms, none of whom is older than 26-year-old lefty Dallas Braden or has an ERA higher than 23-year-old righty Vin Mazzaro's 3.61. Included in that quintet are three lefties, Braden, 24-year-old Gio Gonzalez (acquired in the Nick Swisher trade with the White Sox), and 22-year-old potential ace Brett Anderson (acquired with Carlos Gonzalez and budding power prospect Chris Carter in the deal that sent Dan Haren to the Diamondbacks). The one man I haven't mentioned yet, 22-year-old righty Trevor Cahill, is currently second in the American League in ERA and earlier this season tied an obscure Nolan Ryan record with 20 straight starts of at least five innings with no more than six hits allowed.

Yes, Cahill has been hit-lucky. Yes, the A's home ballpark and their defense's league-leading rate of turning balls in play into outs have helped that group impress. No, with the possible exception of Anderson there's not a truly elite prospect among them, and yes all but Gonzalez (whom the Yankees will miss in this series) has spent time on the disabled list this season, Anderson going on twice with injuries to his pitching arm. Still, there's something there. A viable, young, team-controlled starting rotation. Braden is due for a solid raise in arbitration this winter, but the other four are effectively sophomores (Gonzalez threw 34 major league innings in August and September of 2008). Throw in sophomore closer and 2009 Rookie of the Year Andrew Bailey and a supporting cast of young bullpen arms, and the A's are in very good shape on the mound.

That leaves Beane to find a way to upgrade his offense without completely gutting his defense. An attempt to move Carter to left field would leave slick-fielding on-base machine Daric Barton (acquired in the outstanding Mark Mulder trade back in 2004) at first base, but the prospect of the big-bodied Carter in left and career .400 slugger Barton at first base seems fairly counter-productive, even if Barton and thirtysomethings Jack Cust and Coco Crisp are the only A's hitting above league average this season.

Taylor is supposed to be part of the solution on both sides of the ball, but he'll need to hit in Triple-A first. Cliff Pennington has been a pleasant surprise, rising toward the top of the AL's weak class of shortstops, but he's more of a player that won't hurt than one that will help, and his eventual replacement, 22-year-old Grant Green, is just wrapping up his first full minor league season in High-A. Speaking of which, top prospect Grant Desme handed the A's a major set-back after choosing the ministry after a .304/.398/.656 performance in High-A last year.

So, the A's still have a long way to go at the plate, but they can hold their own on the mound, and the cast of cast-offs playing behind those pitchers make an impressive defensive unit. The good news for the Yankees in this week's four-game set in the Bronx is that the A's are a vastly inferior team on the road (27-37, -33 run differential). That and the Yanks are 5-1 in the season series against Oakland (the A's one win coming in the "get off my mound" game back on April 22, in Oakland).

The Yankees should also get Lance Berkman back this week. He's eligible to come off the disabled list today, but with Marcus Thames red-hot at designated hitter, bashing both righties and lefties, the Yankees might wait until rosters expand on Wednesday to activate Berkman without having to clear space for him on the 25-man roster. Alex Rodriguez is eligible to return on Saturday. [Update: Berkman has indeed been activated and is in the lineup as the DH and number-three hitter against Cahill tonight. Update 2: Scratch that. Bad info via twitter. Thames remains at DH tonight, though Teixeira returns to first base after a weekend thumb injury, so the Yankees do get another bat back. Update 3: Berkman will be on rehab assignment in Trenton the next two days, then activated on Wednesday.]

Moseley has made three quality starts in six turns since taking over for the injured Andy Pettitte, posting a 4.63 ERA and going 4-2 thanks to some solid run support. In fact, Moseley's record has more to do with his run support than his own pitching. In his two losses, the Yankees have scored a total of five runs. In his four wins, the Bombers have scored an average of 9.4 runs.

That doesn't bode well for the Yankees in this game as they will be facing 22-year-old sophomore righty Trevor Cahill, who has been one of the best pitchers in the American League this season, going 14-5 with a 2.43 ERA. Cahill has also been one of the luckiest pitchers in the league this year, with opponents hitting just .215 against him on balls in play. At the same time, Cahill has been adept at avoiding hard contact, with a line drive rate of just 15 percent (against a league average around 20 percent) to go with a strong ground-ball rate and more than his share of double plays. Cahill has been nails of late, posting an ERA of exactly 1.00 in his last seven starts, all of them quality starts lasting at least seven innings, and four of which saw Cahill leave without allowing an earned run.

Hughes had been on a decent run of six starts (4-2, 3.63 ERA) before his disaster outing against the Blue Jays last Wednesday. Hughes gave up five runs in 3 2/3 innings in Toronto while walking five, but he also struck out six and only gave up one home run in that disaster outing.

Another sophomore righty, Mazzaro joined the A's rotation in early June and has posted a 3.26 ERA in 15 starts since, albeit with unimpressive peripherals and a favorable .269 opponent's average on balls in play. The 23-year-old Bergen County native has turned in a quality start in 11 of his last dozen outings and in each of his last five, but despite his 2.56 ERA in those last five starts, his record is 0-3 due to just 2.4 runs per game of support.

Twenty-two-year-old lefty Brett Anderson is supposed to be the A's ace, but he has struggled with injuries all season. A forearm strain cost him most of May, and elbow inflammation cost him most of June and July. Most recently, he hyperextended his right knee in his last start and thus remains merely "probable" for this start. Anderson was getting beat up by the Rangers when he tweaked his knee, but had been pitching well in his four starts prior to that (2.33 ERA, 4.00 K/BB, all four starts quality). He faced the Yankees three times as a rookie last year, all three games were A's losses and Anderson turned in a quality start in only one of them.

Sabathia's last start was his first non-quality start since May 29, but he still went seven innings and picked up his fifth-straight win. Sabathia is 14-2 with a 2.55 ERA and 16 quality starts in 17 turns over the last three months and, largely due to his league-leading 18 wins, has emerged as the leading candidate for the Cy Young award.

Braden's profile has declined since his early-season perfect game and war of words with Alex Rodriguez, but he's continued to pitch well despite missing the first half of July with stiffness in his pitching elbow. Since coming off the DL, Braden has gone 5-2 with a 2.37 ERA in eight starts, six of them quality. In his last four starts, Braden has gone 3-1 with a 1.45 ERA with two complete games. His last start was a four-hit, no-walk shutout of the first-place Rangers, though it's worth noting he did throw a season-high 120 pitches in that game.

Who’s has replaced whom: