PitchingWatch: They Have to Make a Move (Updated with More Moseley Skepticism)

Share All sharing options for: PitchingWatch: They Have to Make a Move (Updated with More Moseley Skepticism) 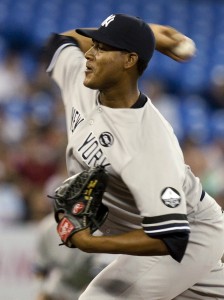 Ivan Nova: Absolutely the right call, but will they make another? (AP)

The Yankees are forewarned. Now it’s up to them to use that information to become forearmed. Over their last 30 games, a span stretching from July 29 to August 29, the Yankees have gone 16-14, a pace equivalent to 86 wins over a full season. One of the chief problems in that time has been the starting rotation. Facing potential playoff opponents the Rays and Rangers, as well as the above-average offenses of the Red Sox, Blue Jays, Tigers, and White Sox (plus the sub-mediocre Royals and Indians and the pathetic Mariners), three-fifths of the rotation blinked. The thirty games have seen the starters allow 4.2 runs a game. That sounds nice given that the average AL starter has allowed 4.6, but a more accurate way of looking at things would be to say that CC Sabathia has allowed 3.1 runs a game and all the other starters combined to allow 5.9.

Here is how the six starters have performed individually:

To a longtime Yankees follower, the mere presence of Nova suggests just how desperate the situations of Burnett (signed for longer than the infamous Mayan calendar suggests baseball will actually exist) and Vazquez have become. A kid being called on to help the Yankees win a pennant? Almost unthinkable. As well as Nova has pitched in both the majors and minors this year, the move is redolent of Hail Mary passes from the past—seeing him join the rotation, I felt a chill wind from 1987, when Al Leiter and Brad Arnsberg were going to keep the Yankees from fading out of the pennant race after they had already tried every Tom, Dick, and Joe Niekro in the book. Arnsberg replaced the shattered veteran Steve Trout, just as Nova replaced the shattered veteran Vazquez.

The Yankees couldn’t catch lightning in a bottle then and I’m not certain they’re going to do so now; Nova seems like a very run-of-the-mill pitcher. That said, the shift to Nova was absolutely the correct one to make. Vazquez was pounded in five straight starts, and was allowing home runs at such a high rate that it seemed possible that in one of his starts the umpires might run out of fresh baseballs. It was his second stretch of futility this year, he has a miserable record in the postseason, and he’s not going to be back next year. The Yankees have better things to do with their starts than spend them on him.

A question that isn’t being asked enough is whether they should be spending them on Moseley. Look at the numbers above. Moseley might have gone 4-2, but he’s been hit hard. The offense is responsible for his good outcomes, with the team averaging  7.4 runs a game of offensive support for the journeyman. Moseley’s 4.63 ERA doesn’t look terrible by the standards we’ve gotten used to over the last few years, but the average starter’s ERA has been lower. In the starts above, Moseley allowed almost two home runs per nine innings, a pace tantamount to allowing 42 in 210 innings. For the season, he’s allowed a batting average on balls in play of only .254. In short, he and the Yankees have been lucky—his ERA could easily be half a run higher.

Moseley is a journeyman/emergency starter. That sort of pitcher can be useful in his place, but not indefinitely. Moseley is  unlikely to help the Yankees tread water much longer. A team only gets one Aaron Small season per generation, sorry to say, and you will recall that even the mystically untouchable Small lost his one playoff appearance. With Andy Pettitte potentially gone next year, Vazquez certain to be gone, Burnett struggling, and Nova’s future uncertain, the Yankees may have two or three rotation spots to fill in 2011. Nova is just one candidate. With David Phelps, D.J. Mitchell, and Hector Noesi pitching at Triple-A, they should be considered candidates—you can only sign one Cliff Lee, and given the way Lee has pitched lately (8.39 ERA in his last four starts) maybe one is too many.

I realize that these pitchers are not on the 40-man roster, but there are some soft spots there (Reegie Corona at the very least; anyone want a second baseman with a .226/.282/.325 translated Triple-A line? Didn’t think so) where the Yankees could make a move. These pitchers, particularly Phelps and Noesi, are unlikely to be worse than Moseley and could be better. The Yankees might find themselves with a surprise fourth starter where right now they have a pretend fifth starter/swingman, and not only better themselves for the remainder of the race and the postseason, but for next season as well. Not only would trying one of these pitchers expand the club’s confidence in its options for next year, it may prove key to finishing this season in good form.

Phil Hughes stands for both the inconsistency of young pitchers and what the Yankees can gain when they put their trust in one. The numbers above are unspectacular, but of the six starts, he made four that were quality, plus another, on August 4, where he pitched quite well but got a quick hook from Joe Girardi (5.1 innings, 99 pitches, just one run allowed). Only his most recent start, which came against the Blue Jays on August 25, was an outright failure. As Jay has written,  Hughes is still trying to get back to where he was at the beginning of the year, but he’s still given his team a solid chance to win more than half the time.

Still, he is hardly a lock for a solid performance in October. The Yankees have only one viable postseason starter at the moment, Sabathia. This number will, perhaps, rise to two if Andy Pettitte comes back in good form, but as the old saying goes, we can’t look for Pettitte until we see him coming. Neither his return nor his return to his previous form are sure things. As such, the Yankees should be preparing for the worst-case scenario, a postseason in which the rotation would have to be Sabathia, Hughes, Nova and ??? The question marks stand for Burnett’s spot, because another thing we don’t know is if Burnett will keep allowing eight runs a game. If he does, he can’t be asked to start a Division Series game. Since we can be reasonably sure that the alternative won’t be Vazquez or Moseley, who will it be? Surely, it would be better to take a chance on a rookie who pitched well in six September starts than a pitcher who had been relentlessly hammered in the days leading up to the pennant. The Yankees only have so much more time to fool around with patches. It’s time to approach the rotation with more urgency.

UPDATE: I filed this post at game time this evening, just as Moseley was going out for the top of the first. When I said that Moseley was unlikely to tread water much longer, I didn't necessarily mean that the spell would break tonight, but this game, against one of the worst offenses in the league, is as good as any. Moseley's ERA has now climbed to 4.86, more reflective of the way he had been pitching. This was his seventh start; he has given the Yankees a quality start in just three of them. Given the pitching resources the Yankees have at Double- and Triple-A, there is no reason to give Moseley another start. Phelps, who now has 62.1 innings of Triple-A under his belt and has a 2.95 ERA in 36.2 August innings (36 hits, two home runs, eight walks, 29 strikeouts) seems the most promising candidate. Moseley has nothing on him except a spot on the 40-man and a nebulous, sort-of veteran status.