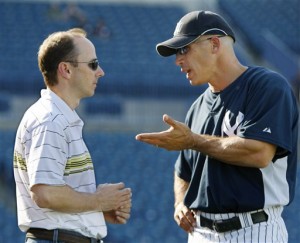 You can bank on Brian Cashman making sure that Joe Girardi remains in pinstripes (AP).

If ever a meme deserved to die a lonely, miserable death, it's the one about how Lou Piniella's retirement paves the way for Yankees manager Joe Girardi to depart for his so-called dream job of managing the Cubs. When Piniella first announced his retirement just over a month ago, a spate of stories surfaced to that effect, and with Sweet Lou's abrupt sayonara last week, those leftovers are being reheated to fill column inches. With the Yankees headed into Chicago for a series against the White Sox this weekend, Girardi has even said that he plans to address the issue, presumably with as much enthusiasm and candor as Derek Jeter discussing his dating life.

Looking into my crystal ball, I can tell you that the short answer is fuhgeddaboutit. Even with Girardi's ties to the area — he's a Peoria native and a Northwestern University alumnus who did two tours of duty with the Cubs as a player, essentially bookending his career save for a slight return in St. Louis — and the fact that his Yankees contract is up at the end of this season, it's not happening.

For one thing, the Cubs are in rough shape, particularly compared to the Yanks. If you think the pressure to win the World Series every year while in pinstripes is something, imagine being on the spot at the helm of a team that's gone 102 years without winning. The pressure broke Piniella, though he's admittedly a much older man. It wasn't kind to Dusty Baker, who got them within five outs of their first pennant since the early days of the Truman administration. It's a job that's eaten up and spit out men in more violent and disgusting ways than Piranha 3D. Take Lee Elia, please (warning: NSFW).

While the word around the game may be that the Ricketts family, the franchise's relatively new owners, intends to spend big dollars, they can't compete with the Yankees on that level. Bob Dylan wasn't writing directly about the Bronx Bombers when he penned "You Ain't Goin' Nowhere" — "Buy me some rings and a gun that sings / A flute that toots and a bee that stings / A sky that cries and a bird that flies / A fish that walks and a dog that talks" — but their winter shopping lists can go a long way towards keeping a manager in the Bronx.

Furthermore, the Cubs have some crippling contracts on the books in Alfonso Soriano (owed $72 million through 2014), Carlos Zambrano (just shy of $38 million through 2012), Aramis Ramirez ($16.6 million through 2012), Kosuke Fukudome ($14.5 million for next year), and Ryan Dempster ($28.5 million through 2012). Aside from Demptster, those players have been worth just 5.0 WARP this year for $68.6 million, which explains why a team with the majors' seventh-highest Opening Day payroll is currently 20 games under .500 and 19 1/2 games out of first place before September. While their farm system is on the way up relative to a year ago, and while they've added three twenty-somethings to the starting lineup over the course of the year, the expensive regulars above average 33 years old, with a chance to be 34 next year.

Furthermore, as I wrote last month at my own site, there's no recent precedent for a Yankees manager voluntarily leaving his post for another job. Joe Torre? Nope, he was lowballed at contract time, and then the Dodgers pounced upon him instead of Girardi, their initial choice. Buck Showalter? Fired. Stump Merrill? Fired. Bucky Dent, Dallas Green, Piniella, Billy Martin, Yogi Berra, Bob Lemon, Gene Michael, Dick Howser, Clyde King, Bill Virdon... all fired. So very, very fired by Mad King George.

The closest precedent would appear to be Ralph Houk, who resigned at the end of the 1973 season due to the constant booing of Yankee fans (who hadn't seen a winner since 1964) and conflicts with Boss Steinbrenner, who had purchased the team earlier in the year. Houk had piloted the team to an 80-82 record — many of the aforementioned were whacked for worse — and then resurfaced the next spring as the Tigers manager, taking over a team that had finished in third place with an 85-77 record and piloting them all the way to 72-90 the following year.

Even there, the parallel breaks down. Houk was departing a team that hadn't finished in first place since 1964, the year Yogi Berra managed the Yankees to the pennant, only to be canned when the Yankees lost a thrilling seven-game World Series; the hatchet man on that hit was Houk himself, who had moved up to the general manager's office the year before. Prior to that, the closest parallel is Joe McCarthy, who after 15 full seasons, eight pennants and seven world championships walked away early in the 1946 season rather than work with Larry MacPhail, who was a few loose lugnuts short of a tire change; McCarthy's own drinking was said to be a factor as well. In any event, he didn't resurface until 1948 with the Red Sox.

At some point in the distant future, it may make sense for Girardi to take the Cubs job, once he wears out his welcome in the Bronx, but the only scenario via which Girardi could end up as the Cubs manager next year is if the Yankees fire him or decide they don't want him to return. There's no evidence to suggest that the manager who helped break their nine-year championship drought and who thus far this year has piloted them to the majors' best record is in any danger of that happening. Move along, folks. Nothing to see here.