Smoke ‘Em If You Got ‘Em

Share All sharing options for: Smoke ‘Em If You Got ‘Em

Earlier this week, my Baseball Prospectus colleague Kevin Goldstein culled a list of 10 minor league relievers who could make for useful September call-ups for contenders. At the top of the list thanks to his alphabetical superiority was Scranton/Wilkes-Barre reliever Jonathan Albaladejo, about whom Kevin had this to say:

The 27-year-old Puerto Rico native has a career ERA of 4.80 in 41 appearances for the Yankees over the past three seasons. Not good, right? That pitcher, though, is a very different player than the current incarnation. Albaladejo has all but scrapped his sinker in favor of a pure four-seam heater that sits at 92-94 mph while touching 96. He's been one of the best relievers in the minors this year; he's already established an International League record with 40 saves to go with a 1.35 ERA while striking out 76 over just 60 innings. He won't be on the playoff roster, but September could be a springboard to a more realistic shot at a job next spring. 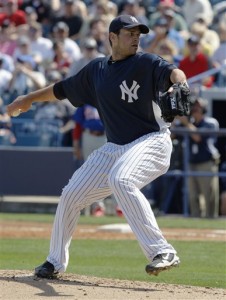 Recall that back in spring training, Albaladejo missed his opportunity to make the big club because he couldn't buy an out. One could almost imagine Office Space's John C. McGinley trying in vain to pronounce his name: "Albala... Albala... Albalanotgonnaworkhere anymore, anyway."

In five Grapefruit League appearances, the hapless hurler yielded 16 hits, two walks and 10 earned runs while retiring just eight hitters, good for a 33.75 ERA — numbers that might have led to a pink slip from a less forgiving organization. But Albaladejo's done a fine job of straightening himself out; not only has the control of his four-seamer improved, his curveball has become a useful weapon to keep hitters off balance as well. Batters are hitting just .168/.231/.241 against him, with 37 hits and 18 walks in 62 innings.

You'd think such work would be rewarded with a long look in a big league bullpen, particularly one that struggled so mightily during the first half of the season, but Albaladejo has just two appearances with the Yankees this year; he was up for all of three days in July, bridging the gap between DL moves involving Andy Pettitte and Sergio Mitre, then forgotten about once the Yankees ditched Chan Ho Park and traded for Kerry Wood. By all accounts, the pitcher hasn't pouted about not getting his turn; last month, he told LoHud's Chad Jennings, "I just want to do my job in Triple-A. And whenever they decide they need me, I’ll be ready."

The Yankees would do well to take another look at Albaladejo as another middle inning option down the stretch; contrary to what Kevin suggests, he might still find a home on the postseason roster. Even as more of a one-inning proposition than a multi-inning guy, he'd be more valuable than Chad "Second Coming" Gaudin given that he doesn't have such infernal platoon splits; righties are hitting a microscopic . 105/.179/.124 against him this year, with two measly doubles the only extra base hits in 105 at-bats. Meanwhile, lefties are hitting a still manageable .226/.280/.348. Given that the Yankees now have Javier Vazquez in the bullpen and Ivan Nova in the rotation — a situation that could eventually reverse — they have less need for a craptacular long man than another middle-inning arm.

Furthermore, it's not as though they can count on Alfredo Aceves to fulfill that role once he returns from his rehab assignment. After allowing just one hit and one run in five innings in his first three rehab appearances, Aceves has been cuffed for nine hits and four runs in 3.2 innings over his last two appearances — against Double-A hitters, mind you. Five of the six hits he allowed on Wednesday night were doubles, not a good sign. At the very least, he's a ways off from helping the big club.

As for Vazquez, I didn't get to watch the 4.1 innings of solid long relief he threw Wednesday night after Phil Hughes phloped. The tale of the tape shows that his four-seamer sat at 90 MPH for most of his appearance after not topping that mark in any of his three previous outings. He didn't get any swings and misses on those 28 offerings, however, so it's a bit early to think he's out of the woods.

Which is all the more reason to see if Albaledejo's new stuff can get big league hitters out. It's unlikely he'll wind up as a secret weapon out of the bullpen on the order of the Angels' Francisco Rodriguez in the 2002 postseason, but you simply can't have too many guys who throw smoke at this time of the year.