Greatest Hits Vol. III: They Didn't Even Send Me a Copy

Share All sharing options for: Greatest Hits Vol. III: They Didn't Even Send Me a Copy 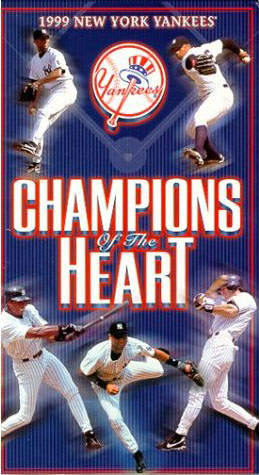 I wrote this for the original incarnation of Yankees.com, in the days before all the team sites were taken over by MLB Advanced Media. The theme resonated with many readers as well as the folks who put together the season highlights package for video—the same people who owned the site. They used my title, "Champions of the Heart," and a few weeks later you could find it on the shelves of every video store in the Northeast. I always had mixed feelings about this. It was neat to see my idea on store shelves—this was before I had written a book—but since it was never publicly acknowledged as mine, it felt little a dirty secret. And then, even if I had been credited, what do you say to people? "Hooray for me! I titled a video!" Also, I was kind of hoping for a bonus. Reading this piece over, I probably didn’t deserve it on technical merits: today, I would term this piece bathetic.

The 1999 New York Yankees: Champions Of The Heart

In 1998, the New York Yankees gave us the perfect ballclub. With 125 wins between the regular and post-season, they were as close to infallible as any team we are likely to see. In a way, 1998 was the baseball season to end all baseball seasons. The home run record, the holy grail of baseball, fell not once but twice. A team without weaknesses stalked the ballparks. It seemed reasonable to ask: how can you top this?

The 1999 Yankees supplied the answer. A year after giving us the invincible ballclub, they have provided the family ballclub. With nothing to prove after last year, they won because it was expected of them, and because their reputations were at stake. In this age of cranky, Albert Belle-type athletes, the fact that they took their jobs so seriously was enough to make them extremely likeable.

Add to that the fact that they seemed to have bonded as a group, and they become even more sympathetic. From Joe Torre’s cancer to the loss of the fathers of Paul O’Neill, Luis Sojo, and Scott Brosius, they pulled for each other and persevered. The tears on the field at the end of the World Series flowed not just for the ephemeral and relatively unimportant triumph of winning a contest, but from the sense of having experienced a rite of passage. Illness and death shadowed the members of the Yankee ballclub right up until the moments before the final game. Winning the World Series then, takes on added meaning to these men: joy from pain. Life out of death; a personal miracle.

Now, that's not just sports. It's more than just a battle between millionaire athletes. It's human... and damned likeable.

It would not be overemphasizing matters to say that the character of this team flows from its manager. Joe Torre personifies the New York Yankees. Patient, tenacious, he gives the team and the organization something it has always lacked: perspective. Torre has seen enough baseball to know that there is always one more inning to play, always one more game. You don’t need to panic until the last pitch of the last out of the last game of the season, if then.

George Steinbrenner has presented us with a vast number of managers. Some of them, like Billy Martin, were very good at what they did, but they were not sympathetic. Martin in particular tended to exacerbate the organization’s worst qualities, multiplying the paranoia and anxiety. Torre deflects them.

Don’t believe everything you read—off the field Yankee Stadium simmers with the same intensity that it always did, still directed by an owner who, at age 69, retains the same urgent desire to win. Torre is his first manager who is able to keep that urgency in perspective, to not let it drive him completely around the bend. The calm that he radiates allows the players to stay within themselves, to enjoy what they are doing, to be friends. The 1976-1978 Yankees fought the owner and each other. This group doesn't even fight opposing teams. They simply take them out with a minimum of fuss.

After last year’s accomplishments, it would have been excusable for this team to have a letdown, and they did let down sometimes. There were a lot of games the team lost that it should have won. Think of two late-September series against the Devil Rays in which the Yankees were at best zombie-like. Even the players admitted that it was hard to get up for those games. Yet when the playoffs finally came, they rose to the occasion. More humanity. More professionalism. Likeable. Sympathetic.

After the fourth game, Torre said he thought that the 1999 club was better than the 1998 club because of what they had to go through; it was a tougher ordeal the second time around. Torre was only partially right: in a pure baseball sense, the 1999 Yankees are clearly not up to the best of the twenty-four other champions, the 1927, 1939, 1950, 1961, 1977, or 1998 Yankees. They do, however, outdistance all of those clubs in heart. Which leads to another question:

How can you top this?