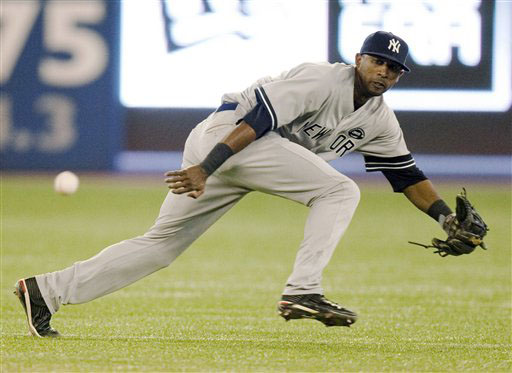 Would Ramiro Peña have made this play better than Eduardo Nuñez did? (AP)

Joe Girardi gave Derek Jeter a night off on Monday night resulting in a bottom third of the Yankee lineup that consisted of Eduardo Nuñez, Ramiro Peña, and Francisco Cervelli. Based on the reaction of the beat writers, bloggers, and fans on twitter, this made the Yankees the functional equivalents of the Pittsburgh Pirates. I realize twitter, by its nature, favors wit over insight and has literally no room for nuanced argument. I also don't mean to pick on the Star-Ledger's Marc Carig, whom I hold in high regard, but he summed up the oddly outraged reaction to the posted lineup best with this tweet: "The Yankees, once home to Murderer's Row, are trotting out Replacement Level Row. Can't predict baseball, eh?"

I don't know. Seems to me when your third baseman and primary designated hitter are on the DL, your shortstop is 36, your catcher 39, and you play in the only division that still includes teams playing on artificial surface, you're going to have to play the bench now and again. It's not as if the Yankees have never run out an underwhelming bottom-third before. On July 10 the bottom third was Colin Curtis, Cervelli, and Peña. On June 11 it was Cervelli, Peña, and Kevin Russo. On May 8 it was Randy Winn, Cervelli, and Peña. Maybe the twitterverse was all a flutter on those days as well, but best I can tell, you can predict baseball to the extent that, at some point, someone is going to get hurt and you're going to have to play your scrubs. Happens all the time. Incidentally, the Yankees won on May 8 and June 11, on the former date by scoring 14 runs against the Red Sox. There are six other guys in those lineups, and they're pretty good at hitting the baseball.

Of course, last night the Yankees lost 3-2, but I don't blame Joe Girardi for resting Jeter. The last time someone else started at shortstop for the Yankees was July 24 and the last time Jeter was out of the lineup entirely was July 10 (see above). The Captain needed a day off and giving it to him on the turf with a groundball pitcher on the mound was the perfect way to do it. Girardi did make two moves I questioned last night, however, one of which might have cost his team the game, though perhaps not the one you're thinking of.

In his first major league start, Ivan Nova came out throwing gas, hitting 96 and 97 repeatedly on the YES gun, though the velocity didn't serve him particularly well as he was clearly overthrowing. It was only after he settled down to his more-typical low-90s that he started to cruise. Nova was rescued from a bases-loaded, no-outs jam in the first by a great 7-2 double play on a would-be sac fly thanks to a perfect throw from Brett Gardner. Then, in the third, he gave up a home run to major league home-run leader Jose Bautista on a hanging slider so far up in the zone it looked like a hanging curve. Bautista's two-run jack accounted for all of the runs the Jays would get off Nova. After that homer, Nova retired the next nine men he faced, but the ninth came with some drama as Bautista overreacted to a pitch way over his head and got into a brief shouting match with Nova causing both benches to empty. The next batter, Vernon Wells reached on an infield single to third, and with that Coffee Joe popped out of the dugout to pull Nova after just 73 pitches and 5 1/3 innings.

I didn't agree with that move, but it didn't cost the Yankees the game. Though David Robertson allowed a tie-breaking home run to Bautista in the eighth, he could just as easily have done the same had Nova pitched seven full frames, and there's no telling whether or not the rookie would have hit a wall and coughed up the lead himself had Girardi left him in. Nova was clearly overexerting himself early on, and there's also a chance that Girardi was correct in believing that the flare-up was additionally stressful for the youngster given the significance of the game in his career.

What really flumoxed me was Girardi's decision to start Eduardo Nuñez at shortstop over Peña, who started at third. The decision was clearly based on the relative experience of each player at the hot corner (Peña has appeared at third base in 61 major league games, while Nuñez has played third just 20 times in his pro career), but Nuñez had started at third in the previous two games, and if the idea of choosing this game to rest Jeter was to put the best infield defense behind rookie groundballer Nova (and perhaps it wasn't, in which case I take back some of the nice things I said about the move earlier), then Girardi undermined his own efforts by putting his best defensive shortstop at third base.

As it worked out, Nova got more outs in the air than on the ground, which might have additionally motivated Girardi's early hook as Nova's final four outs came via fly balls while eight of his first dozen came via groundout or strikeout. One key play, however, came on a groundball to shortstop. With one out in the bottom of the third inning, Jays shorstop Yunel Escobar hit a ball to Nuñez's left that forced Nuñez to make an awkward bounce throw to first base. Were Jason Giambi still at first base, it would have been a wild throw and Escobar would have reached second, but Mark Teixeira made the stretch, caught the ball, and kept his toe on the bag. Unfortunately, first base umpire Mark Wegner (incorrectly) ruled that Tex had come off the bag, giving Escobar an infield single. The next batter was Bautista, who homered on that hanging slider.

It wasn't Nuñez's fault that Wegner blew the call, but perhaps if Peña is at short his superior range allows him to square up the ball and the throw better, giving Teixeira an easier play and the umpire an easier call. Not definitely, but maybe, and if so, the Yankees get back the extra run by which they lost the game.

I should mention as well that Donnie Collins of the excellent SWB Yankees Blog protested my opinion of Nuñez's defense prior to the game, tweeting, "Eduardo Nunez isn't too shabby at SS. Spectacular this season for SWB. Top defensive SS in [the International League] as determined by [Baseball America]." Certainly Collins and Baseball America are better authorities on the SWB Yankees than me, but what I saw last night was the first batter Nova faced single to the left side of second base pastadiving Nuñez, and what was effectively a throwing error by Nuñez lead directly to a key run in the game. I'm willing to believe that I was seeing what I expected to see rather than what was actually going on. Fortunately, I shouldn't get too many more opportunities to evaluate Nuñez's shortstop defense this season.