Like an injured wasp, Javier Vazquez is still able to sting once in awhile, but he's desperately in need of being relieved of his misery with a rolled-up newspaper, or at the very least swatted to the sidelines. On Saturday, his season reached another low point, as he yielded four runs in three innings against the Mariners, the majors' lowest-scoring team. While the Yankees nonetheless emerged with a win thanks to strong work from Chad Gaudin and a late offensive burst which produced five unanswered runs, the start marked the third straight time that Vazquez had failed to reach five innings. 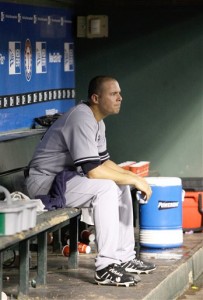 The Yankees really need to give this guy a break. (AP)

Alas, this should surprise exactly no one. After Vazquez allowed 10 baserunners and six runs (three earned) in 5.1 innings during his first start of the month, manager Joe Girardi admitted that his velocity was down, while pitching coach Dave Eiland conceded, "He has a little dead arm," which isn't as serious as it sounds. "Dead arm" is a term for muscular fatigue, a warning sign from the body but something which will improve with rest, rather than a structural problem with ligaments or cartilage which would require intervention.

The surprise — or alarm, really — is that the Yankees haven't shut Vazquez down in the midst of this dead-arm phase despite the diminishing returns. Or perhaps it isn't so alarming, given that Andy Pettitte is on the disabled list and A.J. Burnett and Phil Hughes have scuffled from start to start; it's more like Girardi, Eiland and company appear to have simply put their hands over their ears and gone, "Lalalalala I'm not listening to you!" while pretending that they've only got one hole in the rotation to patch instead of two or three. Furthermore, it's disconcerting to see the team ride a pitcher who's obviously far from 100 percent; just because the Yanks have no long-term commitment to Vazquez doesn't give them an excuse to slag his arm.

At least the Yankees have come around to tacitly admitting the problem, namely via the spot start they gave Ivan Nova on Monday night. The move not only allowed an opportunity to audition the 23-year-old righty, who survived some early shakiness en route to a serviceable 5.1-inning, two-run performance. It also gives each starter an extra day of rest, allows Girardi to separate the potentially bullpen-depleting Burnett and Vazquez, and creates an excuse to push the latter back yet another day while keeping CC Sabathia more or less on schedule. The rotation's next turn now breaks down as follows:

This is not the first time this year Vazquez has been bumped back, and the Yankees can only hope this time around pays similar dividends to the last. Rocked for a 9.78 ERA through his first five starts of the season (a performance I examined at Baseball Prospectus), he was pulled from the rotation, making just one start between May 2 and May 21. He got his groove back, making 10 quality starts out of 14 from the time he was pulled until the end of July, good for a 3.29 ERA. But just when it looked as though he had joined the ranks of the reliable, he was tagged for an 8.10 ERA and seven homers in four starts August totaling just 16.2 innings. On Saturday he tied his season high by allowing three homers in his three frames, two of them to Ichiro Suzuki, who'd hit just three all season long. So it goes.

As Girardi noted, Vazquez has indeed been lacking velocity this year, likely the result of mechanical woes which make his delivery hard to repeat and prevent him from getting on top of his pitches. According to the Pitch f/x data at Fangraphs, Vazquez's average fastball (four-seamers and two-seamers combined) has clocked in at 88.7 mph, down from 91.1 last year and roughly three MPH lower than his 2005-2008 mark; it's also getting less movement, at least relative to last year. He's throwing fewer fastballs than in 2009, getting more fouls but fewer whiffs (swings and misses) and more balls put into play (data from TexasLeaguers.com):

As I noted when writing about Phil Hughes a couple weeks back, generating fouls is generally a good thing — 64 percent of them add a strike to the count — but for Vazquez it's been less so. An absurd 37 percent of the fastballs he threw at the Tigers last Monday night against the Tigers were fouled off, causing him to burn through 106 pitches in four innings.

Add it up and Vazquez is striking out just 7.1 hitters per nine, his lowest mark since his first tour of duty with the Yankees in 2004 (such wonderful memories that produced) and a full strikeout below his career mark. That wouldn't be so problematic if the rest of his peripherals weren't taking a bath as well. He's walking a career-worst 3.7 per nine, over a 50 percent increase on his career mark (2.4), leaving him with a strikeout-to-walk ratio below 2.0 for the first time in his career. He's also yielding 1.8 homers per nine, the product of him combining his lowest-ever groundball-to-flyball ratio (0.72) with a ballpark where teams have racked up an MLB-high 1.4 homers per game. That's a towering 400-foot homer above his career rate of 1.2 per nine innings, a rate which ranks as the ninth-highest among pitchers with at least 2000 innings, a hair higher than that of Jamie Moyer, who earlier this year surpassed Robin Roberts on the all-time leaderboard for homers surrendered. We get it: the guy has a gopher problem.

If it weren't for the fact that Vazquez has been helped out to an almost absurd degree by the Yankee defense — his .271 BABIP is 12 points below the team average, best in the rotation and 43 points better than Burnett — he'd have an ERA even higher than his 5.05 mark, which is still his worst since his 1998 rookie campaign.

What to do? Even with Dustin Moseley already filling in for Pettitte, the Yanks still have a pool of spot starters to draw upon, one that now includes Nova as well as Gaudin and Sergio Mitre. Each has their flaws, and none of them are ideal solutions for a playoff-bound team, but collectively they can buy some time, not only to get Vazquez rested and right but also Hughes, whose innings cap looms somewhere over the horizon.

With the August 31 waiver deadline looming as well, the Yankees have only so much time to try dealing for a starter. The one who's definitively worth pursuing is Ted Lilly, whom the Yanks apparently weren't interested in when the Cubs made him available at the July 31 deadline. He's thrown four strong starts for the Dodgers (28 innings, four runs, 26/4 K/BB), who are nonetheless 12 games back in the NL West race and wouldn't fog up a mirror held to their collective mouths. For them, flipping Lilly would make sense by freeing them from the remaining $1.5 million on his contract. Of course, the Red Sox or Rays could block the Yankees by making a waiver claim on Lilly and hoping the Dodgers pull him back, but the tangible risk that the blocker would be left holding the bag on his salary might cause them to shy away.

After Monday night's game, Girardi was noncommittal about giving Nova another start, but it's pretty obvious the kid will get one given the myriad incentives the Yanks have to do so. It'll be worth watching to see what they do to give him that opportunity, and worth hoping they can use it to get Vazquez back on track.