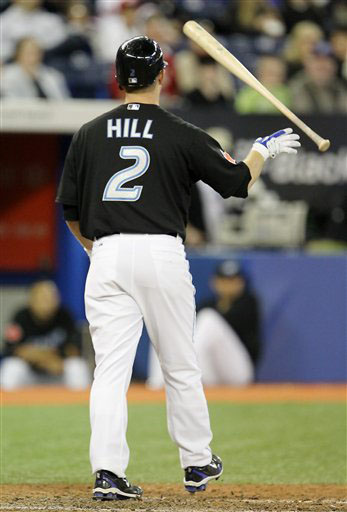 Young pitching continues to be the Blue Jays' strength. Mix in the 25-year-old Romero and 28-year-old Marcum, and the Jays' rotation seems to have regenerated itself in the wake of Roy Halladay's departure, Dustin McGowan's career-derailing shoulder trouble, and Jesse Litsch's similar injury problems (nine starts after returning from Tommy John surgery he tore the labrum in his right hip). Mix in a solid bullpen and an offense that, while problematic, is a constant threat to produce a game-breaking long ball (seven members of the Jays starting lineup have 13 or more home runs this season and the team continues to lead the majors in taters by 20 over the second-place Red Sox and 38 over the third-place Yankees), and the Jays are not a lot of fun to face these days.

I say "not a lot of fun," because while the Jays are dangerous game-to-game, they're not good enough to be a compelling rival. That last has a lot to do with the Jays hacky ways. Their team on-base percentage of .314 ranks above just four other teams: the lowly Mets, Mariners, Astros, and Pirates. All those outs have made the Jays offense decidedly ordinary despite all those homers, and until they find a way to stretch their 27 outs, they'll never be competitive in the AL East. That makes the sub .310 OBPs of their supposed young offensive core (Aaron Hill, .281; Adam Lind, .294; and Travis Snider, .308) all the more problematic.

Still, the Jays are dangerous. They took five of six from Yankees and Rays at the beginning of the month, though they have gone just 5-7 since then. Their only win in their last five games was a 16-2 pasting of Jon Lester and the Red Sox on Friday, though it took the Sox, who have gone 4-2 against the Jays over the last two weeks, 11 innings to beat them the next night.

When the Yanks and Jays last met, the Jays won game one courtesy of a seven-run fifth inning against A.J. Burnett. Ricky Romero then twirled a two-run complete game to beat the Yanks in game two. Neither Burnett nor Romero will pitch in this series, though Burnett could make a relief appearance in extra innings as his next start won't come any earlier than Thursday, at which point he'll have had six days' rest. Game three of that series saw Phil Hughes, fighting a cold, out-pitch Shaun Marcum in the early going ,and the rejuvenated Yankee bullpen lock things down from there. Marcum won't pitch in this series either.

Nova is making his first major league start. Stephani and I have already addressed his promotion. He made two scoreless relief appearances for the Yankees in May and his groundballing tendencies match-up well against a Blue Jays offence centered on the home run.

Morrow, who has the majors' top strikeout rate (10.5 K/9), faces the Yankees for the fourth time this season. He has had diminishing returns in the last two. After holding the Yanks to one run over seven innings on June 6, he allowed five runs each of the next two times he faced them, lasting first six, then just 5 1/3 innings, that last coming on August 2. He has, however, struck out 24 Yankees in those 18 1/3 innings and two starts ago he turned in what is sure to remain one of the top pitching performances of the decade as he threw 8 2/3 no-hit innings against the Rays, walking just two against 17 strikeouts and finishing with a one-hit shoutout and a rare triple-digit game score. He did, however, throw 137 pitches in that outing and was thus skipped the next time through the rotation and pulled after 80 pitches his last time out.

Moseley has just two quality starts and a 4.97 ERA in his five starts for the Yankees since taking the injured Andy Pettitte's place in the rotation, but he hasn't let a game get out of hand yet and the Yankees (and Moseley) are 3-2 in his starts. Still, one wonders if a strong start from Nova on Monday and a poor showing by Moseley Tuesday could bounce the latter from the rotation in favor of the former. In his last two starts, Moseley has allowed eight runs in just 9 1/3 innings and he has given up seven home runs in his last four starts.

Rzepczynski (pronounced: zep-CHIN-ski) is a groundballing lefty who has been hurt by abnormally high opponents' averages on balls in play in both Triple-A and the majors thus far this year. Which is to say, he's better than he's looked. In fact, the only reason he was in Triple-A at all was that he fractured his middle finger on a comebacker at the end of spring training and found himself there on a rehab assignment, but the subsequent bad luck on balls in play and a well-stocked major league rotation kept him in Vegas longer than originally planned (I'm sure his girlfriend has heard that one before), then sent him back there after a couple of unlucky starts in the majors in July. Scrabble has made two starts since returning to the Toronto rotation a week and a half ago. In the first, he held the Angels scoreless on two hits over seven innings while striking out six and walking none. In the second, he walked five A's in 4 1/3 innings and got the hook.

Hughes has been on a nice, modest little run since returning to regular rest six starts ago. Over those last six starts he has gone 4-2 with a 3.63 ERA and four quality starts. He hasn't allowed more than three runs in any of those outings nor lasted fewer than 5 1/3 innings (though he also hasn't gone deeper than six full frames). Phil has a handsome 3.83 K/BB over that stretch and has allowed just three home runs in his last five starts.

Cecil is a big lefty sophomore who dominated the Yankees in Toronto back on June 4 (8 IP, 1 R) and managed to survive issuing six walks in six innings against them in a rematch in the Bronx on July 2, again allowing just one run. His disaster start against the Angels two turns ago was his only non-quality start out of his last eight, dating back to that rematch with the Yankees, and even with that Angels start included, he has gone 3-1 with a 3.14 ERA over those last eight starts. Lefties have hit just .188/.215/.274 against Cecil this year.

Who’s has replaced whom: