Share All sharing options for: The Domino Effect: Ivan Nova’s promotion and its minor league repercussions 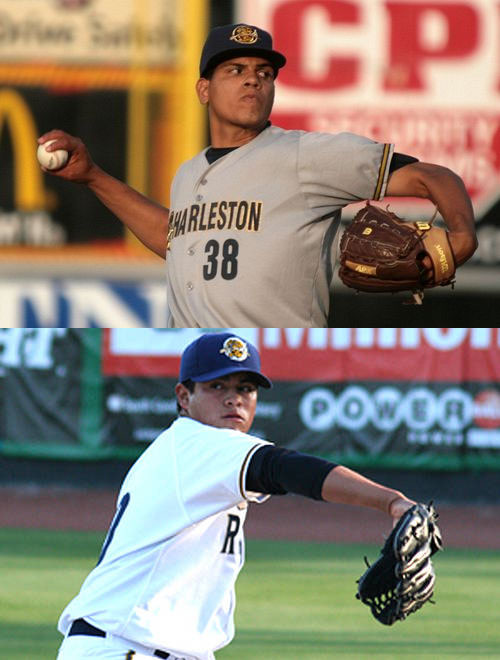 The tall and the short of it: Dellin Betances (top) and Manny Banuelos (bottom)

When Alex Rodriguez went on the 15-day disabled list, Ivan Nova was called up to act, at least for one turn, as a sixth starter and an insurance policy to a Yankee rotation that has been shaky of late. It seemed like a cut-and-dried move, but Nova’s promotion and the recent trade of Zach McAllister have caused a cascade of moves in the Yankees' minor league system, leading to two of New York’s best pitching prospects, Manny Banuelos and Dellin Betances, getting promoted to Double-A.

The news that Banuelos and Betances had been promoted from High-A was surprising, as both pitchers started the season late due to surgeries (Banuelos had an emergency appendectomy and Betances a ligament reinforcement procedure in August 2009) and were expected to stick in Tampa for the entire year to get some innings. When you take a look at their respective numbers, though, it's clear that they deserved the promotions.

When the Yankees acquired Alfredo Aceves from the Mexican League, they also received Banuelos in the deal. He has made the scouting department look incredibly sharp for their investment, as he has shown absolutely no difficulty in handling the competition. The 5-foot-10 southpaw has dominated opponents to the tune of a 2.19 ERA between the GCL Yankees and Tampa, but even with a sparkling ERA and peripherals, that’s not the information that has been turning heads recently.

The big news with Banuelos has been the speed of his pitches. Coming into the year, his fastball sat between the high 80s and low 90s, though he could reach back and hit 94. On a recent scouting trip, AOL FanHouse’s Frankie Piliere tweeted that the lefty was sitting between 93-95 mph, but he had touched 97. Considering his small frame, there have been many questions as to his ability to stick as a starter, but with his arsenal, control, and his recent transformation into a speed demon, he has a better chance at sticking.

To complement his heater, the Mexico native throws a very good changeup and a solid hook. According to Baseball Prospectus’ Kevin Goldstein, he has plus-plus command and control, an astounding trait for a 19-year-old pitcher.

Banuelos will make his Double-A debut tonight against New Hampshire. He’ll be one of the youngest players in the league, and considering how well he has pitched since coming into the organization, it may present him with his first real challenge.

The other man on the move, Betances, has been making a strong case for the Yankees to add him to the 40-man roster this year. Selected in the eighth round of the 2006 draft, Betances had tons of potential, which led the Yankees to lure him away from a commitment to Vanderbilt with a record-setting check for $1 million. Injuries have plagued the righty for his entire career, and last year, several injury interruptions led to him pitching a disappointing 44 1/3 innings with a 5.48 ERA before halting his season to go under the knife. Now healthy, it seem as though Betances is finally starting to connect the dots, showing off the promise the Yankees saw in him for years.

The 22-year-old has a huge frame, standing at 6-foot-8, 245 pounds. Unsurprisingly, he is a power pitcher with a fastball that sits between 94-95 mph but can top out at 97. The righty also has what Baseball America rates as a plus curveball and a changeup thrown between 82-85 mph. Perhaps due to his massive build, perhaps due to injuries, or a combination of both, Betances has struggled with controlling his pitches in the past, but this year he has shown massive improvements, going from 27 walks last year to 19 this season in 26 2/3 more innings. His strikeout rates have also made tremendous strides, as he is whiffing 11.15 batters per nine innings, compared to 8.93 last year.

Betances will be on the bump for his Double-A debut on Tuesday, and his performance there will give the Yankees a better idea how far along he is and will likely lead them to protect him in the Rule 5 draft. If he manages to put it all together, Betances could be a top-of-the-rotation starter, but for now, the main concern is keeping him healthy and seeing that he continues to refine his pitches and control.

Getting back to Nova, it is unsurprising that he is the pitcher the Yankees have summoned to help munch innings. The 23-year-old righty is a workhorse who has come into his own this season, boasting the best stats and peripherals of his career. He’s striking out more than a batter per nine innings more than he did last season while lowering his walk rate by nearly one batter per nine innings pitched. His WHIP has improved to 1.26, a very solid number for a starting pitcher. Since the All-Star break, he has been pristine with a 1.96 ERA in 41 1/3 innings. His work has been so good of late that he recently made Baseball America’s hot sheet.

Nova throws a fastball that sits in the low 90s, but he can pump it up to 94-95 mph. His arsenal also includes a good curveball that hangs in the high 70s when he’s on and a decent changeup. One important factor for the 6-foot-4, 210-pound righty is to keep the ball on the ground, something that he has been able to do very well this year. He has allowed 0.62 homers per nine innings, and he gets 1.66 ground balls per air ball, so the chances of him getting taken deep to the short porch at Yankee Stadium are not great. The improvements that he has made have been the results that the Yankees have been working toward with him for several years, as he has had a rocky road to the majors.

After signing with the Yankees as an international free agent in 2004, Nova looked solid in his first dalliance in professional ball, as he dominated Gulf Coast League hitters to the tune of a 2.72 ERA and a 36/7 strikeout to walk ratio. However, over the next two years, it seemed that the young Dominican had lost his stuff; his ERA ballooned to 4.98 at Low-A Charleston in 2007 and sat at 4.36 at High-A Tampa in 2008. During those two seasons, he did have an extraordinary amount of bad luck on balls in play; his BABIP was .333 in 2007 and .343 in 2008, so his unlucky streak was likely a major contributor in his inflated ERA. Nova’s WHIPs were also awful at 1.53 and 1.44 in 2007 and 2008, respectively. What’s ironic is that, during this time, he showed the best control of his pitches by posting the lowest walk rates of his career.

Eligible for the Rule 5 draft for the first time in 2008, Nova was left unprotected by the Yankees, and the San Diego Padres selected him in the second round of the major-league portion of the draft. He struggled in nine innings at Padres camp, though, and was sent back to the Yankees, setting him up for his breakout campaign in 2009.

As Cliff mentioned yesterday, Nova’s peripherals at Double-A Trenton did not look spectacular, as he was walking about 3.9 batters per nine and not getting enough whiffs or ground balls to look like a potential back-of-the-rotation starter, but he was finally getting results. No doubt aided by a .283 BABIP, the righty turned in a 2.36 ERA in 72 1/3 innings before getting promoted to Triple-A for the remainder of the season. There, he was still not blowing people away with just 5.8 strikeouts and 3.8 walks per nine innings, but he was Scranton’s best starter in the playoffs and able to eat innings.

This season, Nova has gone less than six innings only three times, making him an important cog in the Scranton rotation. He is showing the consistency that had eluded him for several years, and he has already tossed 145 innings this season. Last year, he threw 165 innings between Trenton, Scranton, and the Dominican Winter League, so while he’s not quite a supernova to plug in, he is very capable of absorbing some innings to help the Yankees down the stretch and rest taxed starters.

Baseball America wrote in their 2010 handbook that Nova could be a fourth starter in the big leagues if his command and secondary pitches improved. If he is able to maintain the strides he has made in his game this season, that projection seems like a definite possibility.

It has not been announced how Scranton will fill the voids left by McAllister and Nova, but there is speculation that Trenton starter D.J. Mitchell will be bumped up to fill one spot in the rotation. If that is the case, the starting five at Double-A will be Banuelos, Betances, Andrew Brackman, Hector Noesi, and Adam Warren (who earned the top spot in Baseball America’s hot sheet). Sean Black and Josh Romanski were promoted to Tampa to take the spots left by Banuelos and Betances, and James Gipson and Shane Greene were upped to Charleston.