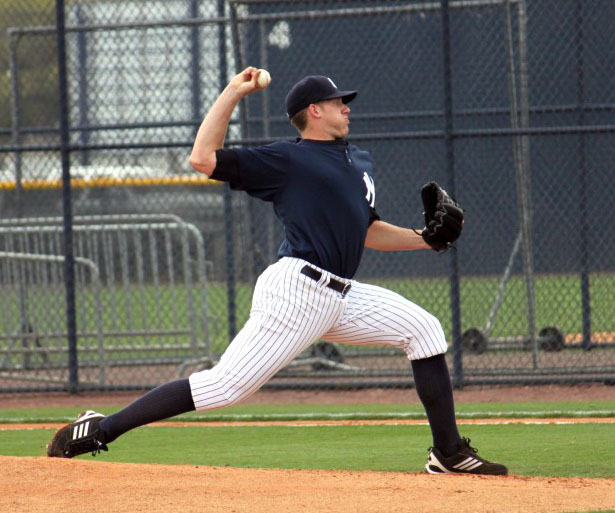 Zach Attack: The Cost of Kearns

On Friday, the Yankees completed their trade with the Cleveland Indians for Austin Kearns by shipping over right-handed Triple-A starter Zach McAllister as the player to be named later. It was a bit of a shock to see McAllister dealt for a role player like Kearns. McAllister came into the season with high expectations heaped upon his broad shoulders; our Baseball Prospectus colleague Kevin Goldstein had ranked him as the Yankees’ fourth-best prospect for the 2010 season, while Baseball America had him ranked as the fifth-best.

How did McAllister fall from top prospect to the player to be named later in a small deadline deal? Did the Yankees give up on him too soon? It’s possible, but the Yankees are a team built to dominate, so McAllister, who doesn't project as a front-of-the-rotation starter, probably didn’t have much of a future in the organization. It’s also possible that the Yankees' decision was based on a need to clear some room for future roster considerations.

The Yankees drafted McAllister in the third round (104th overall) out of Illinois Valley Central High School in that sparkling 2006 draft class. As I have mentioned, all prospects drafted in 2006 and earlier will be eligible for the Rule 5 draft this offseason if they are not added to the 40-man roster. The Yankees are doubtlessly going to sign at least one or two free agents, and deciding which prospects to protect with the remaining spots on the roster could be difficult. Since McAllister is just a level away from the big leagues and has a track record of success, the Yankees would probably have protected him, hoping that he could rebound from an awful season. Now that he’s gone, the Yankees have an extra roster spot to play with.

Originally expected to be one of the first starters called up if trouble struck the rotation this year, McAllister had clearly fallen out of favor. Ivan Nova (more on him tomorrow) has had a far superior season and was promoted to New York yesterday. Other pitchers in the organization have had huge years (off the top of my head, taking only those at Tampa and above into consideration: Manny Banuelos, Dellin Betances, Andrew Brackman, Hector Noesi, David Phelps, Graham Stoneburner, and Adam Warren), making the loss of McAllister much more sustainable. If you have been following the Yankees’ minor-league system this season, you know that McAllister has struggled. Could the Yankees have seen this regression coming? How could a pitcher who has been so dominant since Low-A suddenly go so far askew?

Part of it could be a product of his arsenal and fringy overall stuff. Though McAllister has a power pitcher’s physique, he is actually a finesse pitcher who thrived in the low minors because he could command the strike zone and get the whiffy whippersnappers to chase pitches out of the zone and hit the ball on the ground. As he moved to Double-A, the competition was more difficult for him, and his ground-ball rates suffered, but here again, his command kept him from getting beat often. The Yankees spent the first two years after they drafted McAllister raising his arm slot, but after initial success, he scrapped the alterations prior to moving up to Double-A, where he blossomed, likely preventing the Yankees from changing what had led to his success.

A typical McAllister fastball registers about 89 to 91 miles per hour on the gun, and his sinker also scrapes the low 90s. According to Baseball America, the only plus pitch in his repertoire is his slider, which he uses to get grounders. His other offerings, a curveball and changeup, are fringe pitches, but mixing all of his pitches allowed him to be very effective in the lower levels. His clean mechanics helped him avoid major arm troubles, though he had a bout of tired arm in 2009. However, the lack of a true out pitch has probably hurt him this season.

After his stellar campaign at Double-A Trenton in 2009, in which he held a 2.23 ERA after 121 innings pitched over 22 starts, there was no question that the 6-foot-5, 230-pound McAllister was ready to take on the next level. When Trenton failed to make the playoffs to defend their Eastern League title, McAllister earned a trip to Triple-A Scranton to help that team make a run at the Governor’s Cup. McAllister picked up the win in the clinching game against Scranton’s first-round opponent, holding the Gwinnett Braves to three runs in 5 1/3 innings, but that would be his only Triple-A start of 2009. Scranton fell to the Durham Bulls in the second round of the playoffs, ending their season and sending McAllister home to await spring training and his first full season at Triple-A.

The first sign that something was not right for the big righty this season came in April. He pitched reasonably well, with a 3.86 ERA in 28 IP, but he posted the lowest ground-out to air-out ratio of his minor-league career, with just 0.56 of his outs coming through worm killings. McAllister's ground-out/air-out ratio had been falling steadily almost every year since he was drafted, but his 0.83 ratio the season marks the first time in his career he has been below 1.00 over the course of a full season. The resulting fly balls have been leaving the park at an alarming rate. After allowing only 17 home runs in his professional career (including a minuscule four homers last season), McAllister has allowed 20 gopher balls so far this season.

It hasn't helped that McAllister has been giving up more hits in general. Last season, he allowed 98 hits in those 121 innings for a nifty WHIP (walks plus hits per inning pitched) of 1.08, a very solid number for a starter. This year, though, his WHIP is a dreadful 1.53, as he is giving up 11.2 hits per nine innings pitched and can’t seem to keep runners off the bases—or prevent them from scoring. With runners on base, fireworks erupt and his ERA skyrockets to 8.07, and if the runners manage to get into scoring position, even bigger ‘splosions take place, as McAllister has an 11.15 ERA in those situations. In his worst month, July, the northpaw allowed 43 hits (including seven homers) in just 23 1/3 innings, and August wasn’t looking a whole lot prettier (30 hits, including four homers, in 24 1/3 IP). Opponents have a .308 average against him this season. Sure, some of it has been the result of bad luck and bad fielding; McAllister has a .337 BABIP (batting average on balls in play) up from .277 last year, and Scranton does not have the best of defenders in the infield. That doesn’t explain away the fly balls, but it could be part of the reason for his poor year. He has also been inefficient with his pitches, especially when behind in the count, as each of his 38 walks this season have come when he has fallen behind the batter early in the count. Another explanation could be that he is simply starting to leave the ball in the sweet spot more, struggling with his command of his sinker/slider combo moreso than his control.

Baseball America foresaw McAllister's fate, writing in his 2010 player capsule that he could be trade bait because of the lack of open spots in the Yankees' rotation. Baseball Prospectus 2010 mentioned that, unless he could maintain his command, McAllister was likely bullpen-bound to work in middle relief and set his ceiling is as a fourth-starter and innings muncher. Still, the price for Kearns was higher than I originally thought it would be. McAllister is still young and has plenty of time to turn it around, but the move to an organization more likely to give him a big league opportunity should be welcome for him and not hurt the Yankees over the long term.