Move Over, Rover, and Let Nova Take Ovah (a.k.a. A-Rod comes down with Sow's Ear, Yankees call up silk purse)

Share All sharing options for: Move Over, Rover, and Let Nova Take Ovah (a.k.a. A-Rod comes down with Sow's Ear, Yankees call up silk purse) 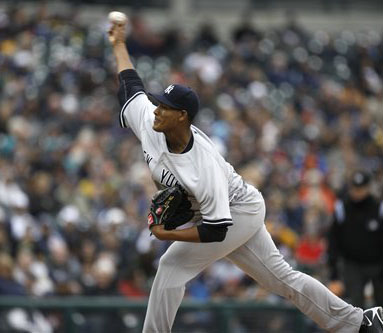 Ivan Nova in his major league debut at Comerica Park on May 13. (AP)

Okay, let's go over this.

In the fifth inning of last Sunday's game against the Royals, Lance Berkman hits into an inning-ending 3-6-1 double play and steps on the heel of Royals pitcher Bryan Bullington as he crosses first base, turning and spraining his ankle. He comes out of the game and is listed as day-to-day. In the fourth inning of Monday's game, Alex Rodriguez aggravates what was apparently an existing calf injury. An MRI reveals a low-grade strain. He is listed as day-to-day. Ramiro Peña replaces Rodriguez at third base in that game, but after Joe Girardi pinch-hits Marcus Thames for Peña in the eighth inning, he is forced to put Francisco Cervelli at third base in the ninth as Peña was the team's only proper reserve infielder. That Thursday, with both Berkman and Rodriguez still unavailable, the Yankees, who had been playing without an infielder on the bench, decide to put Berkman on the 15-day disabled list, retroactive to August 16, not because of the severity of Berkman's injury, but because they needed to add a reserve infielder to the 25-man roster. On Friday, Rodriguez returns to the lineup as the designated hitter, but in his first plate appearance, he again tweaks his calf on a swing and leaves the game. On Saturday, after consulting with the team doctors and trainers, the Yankees place Rodriguez on the 15-day DL as well, though the one at-bat on Friday costs them the ability to make the move retroactive.

In all fairness, while I got a bad vibe off the Yankees' decision to DL Berkman on Thursday, I was unable to argue against the team's need for an extra infielder, and Rodriguez's subsequent exacerbation of his injury proved that waiting for him to be ready would have been the wrong tack. It's obvious now that the Yankees put the wrong player on the DL that day, but they started Rodriguez on Friday because they thought he was ready to play, and with both Berkman and Rodriguez day-to-day, it was a no-brainer which player to sacrifice for the necessary security of a reserve infielder. So, I can't really second-guess the Yankees' decision-making on this matter, but it's rather unfortunate that they'll now be without Berkman for another week when he might have been ready to DH as soon as today and have lost Rodriguez for the next two weeks in addition to the four games he missed prior to being put on the DL.

In Rodriguez's absence, third base will be handled by some combination (possibly a lefty/righty platoon) of Peña and Eduardo Nuñez (that extra infielder), which is disappointing to say the least, and in Berkman's absence, we might see more of Jorge Posada at DH against righties, and thus more Francisco Cervelli in general.

The one upside to all of this mess is that the Yankees used Rodriguez's disabling on Saturday as an excuse to finally bring Ivan Nova up for a chance to start, handing him the ball for Monday's opening game against the Blue Jays in Toronto. With Javy Vazquez apparently suffering from a dead arm, A.J. Burnett proving unable to put up three strong starts in a row, Andy Pettitte lingering on the DL with a nagging groin pull, and Phil Hughes facing an approaching innings limit, Nova could prove to be a key player for the Yankees down the stretch.

Now, before we get too excited, here's what I wrote about Nova in my breakdown of the Yankees' spring training invitees back in February:

This 23-year-old Domincian righty hadn’t pitched above High-A when he was taken by the Padres in last year’s Rule 5 draft. After being returned, he landed in Double-A and posted a sterling 2.36 ERA, but his peripherals weren’t terribly strong (1.52 K/BB). He posted a similar K/BB after his promotion to Scranton and wound up with a 5.10 ERA, though it’s worth noting that his ground ball rate halved in the higher league. Nova is said to have three strong offerings (low-90s fastball, change, curve), but lacks consistency and deception, which may be why that stuff isn’t translating into strikeouts. Right now, Nova strikes me as a new version of Jeff Marquez, the groudballing faux-prospect sent to the White Sox in the Nick Swisher deal, except Marquez had better minor league numbers. Given the fact that other teams have shown interest in him, I’m thinking Nova’s value to the team is more as a trade chip than a future major leaguer.

With that in mind, Nova has done everything right in Triple-A this season. He has cranked up both his strikeout rate (from 5.8 K/9 at each level last year to 7.1 K/9) and his groundball rate (from 1.21 groundouts for every fly out at Scranton last year to 1.66 this year) while shaving off a few walks (down to 3.0 BB/9 from 3.8 across both levels last year) to put his K/BB at a solid 2.40, the best mark of his full-season career. The result has been an impressive 2.86 ERA for a 23-year-old at Triple-A as well as three scoreless innings of relief across two appearances in his brief major league debut in May.

Nova has only had one really awful start all year, and that came in his first turn after returning to the minors in late-May. Since then, he has posted a 2.70 ERA, and he has been nails in five of his six starts since the All-Star break, going 5-1 with a 1.96 ERA and 4.63 K/BB in those six turns. That's an impressive showing from a 23-year-old at Triple-A, so maybe the Yankees do have something here after all.

Right now, Nova is promised nothing more than Monday's start. Joe Girardi, who announced the decision in his post-game press conference after Saturday's game, said that the other five starters are simply being pushed back a day and that no decision has yet been made about how the rotation will look going forward, though speculation abounds. The Yankees have an off-day on Thursday, and the extra day pushes both Burnett and Vazquez to the other side of it, which means Girardi can almost re-arrange his rotation however he wants it. Burnett, Vazquez, and CC Sabathia will all be on full rest come Friday's opener against the White Sox, and if Nova pitches well on Monday, Girardi could pull whomever he wants from the rotation, or move forward with a six-man unit (though that last seems least likely).

The preferable move would be to DL Vazquez for his dead arm and call up the hot-hitting Juan Miranda (.300/.389/.517 on the season, .319/.413/.522 since the All-Star break) to keep Berkman's left-handed DH spot warm (the Yankees have their infielder, but they also have a three-man bench for the time being). That assumes Nova will continue his brief major league success against the Jays on Monday, but the Jays are something of an all-or-nothing long-ball offense that could well be shutdown by an effective groundballer like Nova.

The important thing is that the Yankees are finally making some use of their pitching depth this season after letting Nova and Jonathan Albaladejo (1.35 ERA, 11.4 K/9, 4.47 K/BB and an International League record 40 saves), linger in Scranton for most of the season while employing the likes of Dustin Moseley and Chad Gaudin at the major league level. The question now becomes whether or not it will pay off.