What Do We Have Here: Eduardo Nuñez

Share All sharing options for: What Do We Have Here: Eduardo Nuñez 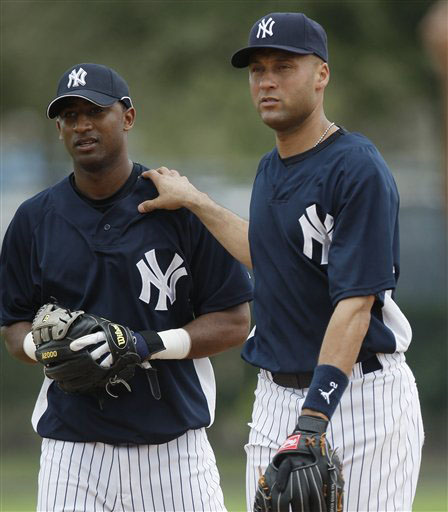 With Alex Rodriguez day-to-day with a low-grade calf strain, the Yankees have had to employ Ramiro Peña (and for a few innings on Monday, Francisco Cervelli) at third base, leaving them without a backup infielder. So, on Thursday, they placed Lance Berkman, also day-to-day since spraining his left ankle by stepping on the heel of Royals starter Bryan Bullington when crossing first base in Sunday's game, on the disabled list and called up shortstop Eduardo Nu﻿ñez from Scranton/Wilkes-Barre. More on Berkman in a moment, but since Nu﻿ñez made his major league debut on Thursday (a defensive replacement at shortstop in a blowout, he fouled out to the catcher in his first major league plate appearance), what exactly do the Yankees have here?

Not much. Nu﻿ñez, who was an International League All-Star this season due largely to a hot April, has somehow acquired some level of interest as a prospect, but he's no such thing. A poor defensive shortstop who has little experience elswhere on the diamond (19 games at second, 17 at third, 16 of those 36 games coming this year), Nu﻿ñez isn't much of a hitter either. A right-hander with a career .274/.318/.369 line in six minor league seasons, Nu﻿ñez is all batting average, and with a career mark of .274, that means he's not much of anything. In 506 plate appearances this season, Nu﻿ñez had exactly as many walks (32) and strikeouts (60) as he did in 494 PA in 2007, so despite improving his walk rate relative to the last two years, he's still not showing meaningful progress in that department. Meanwhile, his isolated slugging has fallen back below .100, which is where his career rate lurks.

Nu﻿ñez does have speed and has been improving his success rate on the bases to the point that he has stolen 23 bags at a stellar 82 percent success rate for Scranton this year, but that's the only significant skill he possesses. I suppose you could build hope on the fact that he has reached the majors at the age of 23, but his promotions through the minors have come as much despite his performance on the field as because of it. Brian Cashman said on Thursday that Nu﻿ñez "has earned the right to be in the big leagues." I beg to differ. Nu﻿ñez has hit .239/.298/.310 since the All-Star break. There's nothing to see here other than a pinch runner and emergency defensive replacement.

For that, the Yankees have sacrificed an extra week of Lance Berkman, whose ankle was healing slowly, but who likely would have returned to action by early next week at the latest and might have been available to pinch-hit this weekend (quothe Big Puma: "If there was a Doberman chasing me, I think I'd do alright"). Obviously the Yankees could more afford to sacrifice Berkman than Rodriguez, but that doesn't change the fact that the team's top deadline acquisition is now shelved until August 30th.