This is not a good team, it's not getting better, and no amount of offseason tinkering is going to make it a good team . . . the M's might as well stand pat this winter. They have nothing to gain by doing otherwise.

I wrote that about the Mariners in early November, roughly a month before the M's signed Chone Figgins and traded for Cliff Lee, the opening salvos in a very active offseason that made them media darlings and inexplicable pet pre-season picks to win the American League West.

Well, we know how that all went. The Mariners' 2010 season has been one disaster and embarrassment after another. Go back to their deadline deal for Jack Wilson and Ian Snell last July, a move I also panned in no uncertain language. Wilson, who hadn't played 150 games since 2005 due to an increasing fragility, missed almost two months mid-season and played in just 61 games before falling in his bathroom at home and breaking his hand, ending his season. Snell posted a 6.41 ERA in 12 starts before being dropped from the 40-man roster. The Mariners re-upped fading legend Ken Griffey Jr. to serve as their designated hitter, but less than a month after "napgate," Griffey retired sporting a .184/.250/.204 line and having failed to homer all season. 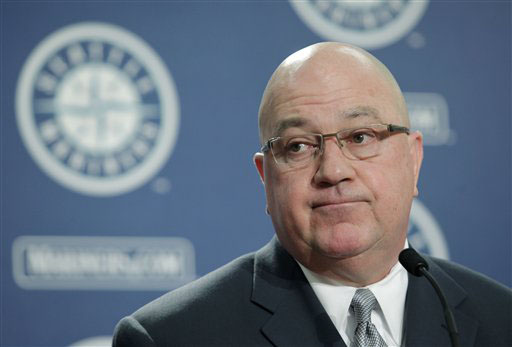 Jack Zduriencik has made this face a lot this year. (AP)

The Figgins signing made some level of sense before the M's inexplicably decided to swap him and Jose Lopez on their infield in spring training, putting one of the best defensive third basemen in the game at second base and playing two players out of position. The fallout from that has been miserable seasons on both sides of the ball from both players and considerable discontent from Figgins, who got into a fight with manager Don Wakamatsu in the dugout during the Mariners' July 23 game against the Red Sox. A little more than two weeks later, Wakamatsu was fired.

Never mind that Lee missed most of April with an abdominal strain, that the M's actually managed to trade Carlos Silva and lose on the deal, that this was the year Bradley, the return for Silva, decided he finally needed mid-season counseling, or that they resigned Erik Bedard coming off shoulder surgery only to watch him spend the entire season on the disabled list.

Almost. This is a team that hasn't outscored its opponents over a full season since 2003, whose best position player is a 36-year-old slap-hitting leadoff man who rarely walks. When challenged on my assertion above by Mariners fans on-line, I pointed out that the M's don't have a core around which to build. Yes, they have Felix Hernandez, but what else? Ichiro will be 37 in October and, perhaps inspired by his teammates, is having one of his worst major league seasons, hitting just .307/.357/.380. Franklin Gutierrez is a great fielder, but he's not much of a hitter (.264/.320/.405 career and worse than that this season) and he's already 27. Lopez will be 27 in November and has been worse at the plate than Gutierrez both this year and over their careers. They traded Brandon Morrow. Who else is there?

That's why, in my original hot-stove piece, I suggested the Mariners just play their kids and see what they have. Not that the Mariners' major league-ready prospects are much to look at, either. Maybe big left fielder Michael Saunders turns into something, but don't hold your breath. The teams' 2009 first-round pick Dustin Ackley is hitting .303/.369/.485 at Triple-A and could be up as early as next year. He's a legitimate blue-chipper, so that's something, but the Mariners put him at second base, making the Figgins move all the more confusing as Figgins is signed through 2013 with a vesting option for 2014.

The one thing that went right for the Mariners was the Cliff Lee trade. There, Zduriencik benefitted from Ruben Amaro Jr.'s misguided decision to trade Lee to restock the Phillies' farm system in conjunction with the acquisition of Roy Halladay for a trio of top prospects. The M's gave up three underwhelming prospects for Lee, one of whom was just busted for cocaine, then leveraged Lee in July for the Rangers' top hitting prospect. Sure, Justin Smoak struggled mightily with both the Rangers and Mariners in this, his rookies season, and is currently back at Triple-A where he's hitting well below his career rates, but he's a legitimate blue-chip prospect and potential middle-of-the-order hitter on a contending team, which is exactly what the Mariners need.

So maybe with King Felix, now signed through 2014, Ackley, and Smoak, the Mariners are finally developing a core to build around, but they're still years away from legitimate contention, and Zduriencik's work over the past 13 months has done little to inspire confidence (in addition to all of the above, he effectively burned a bridge with the Yankees by reneging on a deal to trade Lee to the Bronx for a package built around Jesus Montero, who may lack a position, but projects as a far better hitter than Smoak--though I thank him for doing so).

As for the Mariners team arriving in the Bronx this weekend, they've won their last four series, but those four series have come against the Royals, A's, Indians, and Orioles. Prior to that the M's had won seven of their previous 31 games. Their last series win prior to their recent streak against the weaker sisters of the American League came when they took two out of three from the Yankees in the Bronx at the end of June. Of course, they won those two games because Cliff Lee and Felix Hernandez pitched back-to-back complete games, the latter a shutout. The Yankees, who countered serve by taking three of four in Seattle a week later, holding the punchless M's to eight runs in the four games, again have to contend with Hernandez, who was responsible for the Mariners' only win in that rematch, but get Luke French in place of Cliff Lee, which pretty much sums up the Mariners at this point in the season.

If the Mariners could score, Felix Hernandez would be a Cy Young candidate, possibly even the leading Cy Young candidate, but the writers aren't going to vote for a pitcher with a losing record. Just ask Nolan Ryan. In 1987, Ryan led the National League in ERA and the majors in strikeouts but went 8-16 due to an average of 3.28 runs per game of support from a punchless Astros team and thus failed to get a single first-place vote, finishing tied for fifth in the Cy Young voting. Hernandez is third in the American League in ERA (2.62), second in strikeouts (172) and complete games (5), leads the American League in SNLVAR, and leads the majors in both quality starts (23) and quality start percentage (88 percent). Yet, because he has received just 3.01 runs per game of support, his record stands at an unimpressive 8-10. Hernandez has had just three non-quality starts all season, each of them disasters, the last coming on June 8. Since that last, he has posted a 1.66 ERA in 13 starts with four complete games, two of which came against the Yankees for this combined line: 18 IP, 12 H, 1 R, 5 BB, 20 K. The one Yankee run off Hernandez this year came on a solo homer by big-game-hunter Nick Swisher.

Since opening the season 5-0 with a 1.99 ERA in his first six starts, Burnett hasn't gone more than two starts without a stinker, and he enters this game coming off two quality starts, which should be encouraging, but given that pattern, isn't. Burnett hasn't faced the Mariners since last September, when he threw seven innings of one-run ball against them at Safeco.

Twenty-seven-year-old lefty Jason Vargas went from the Mets to the Mariners in the 12-player J.J. Putz trade after missing all of 2008 with a torn hip labrum. He divided 2009 among the Mariners' bullpen, rotation, and Triple-A affiliate, then won a rotation spot out of camp this year and has since gone 9-5 with a 3.15 ERA. However, that performance is largely the result of luck on balls in play (.262 BABIP) and an abnormally low rate of fly balls leaving the ballpark (5.5 percent against a league average of 7.3). That last is where Vargas's correction seems most likely to strike as he give up a ton of fly balls, such that even with that low rate of flies turning into homers he has allowed 0.9 home runs per nine innings on the season against a league average of 1.0. Twelve of the 14 homers Vargas has allowed on the season have been hit by righties as he's dominated his fellow southpaws (.169/.212/.250). Vargas also dominated the Yankees the last time he faced them, allowing one run in seven innings at Safeco on July 8.

Sabathia is second to Hernandez in quality starts and quality start percentage in the American League, and because he pitches for a team that can score, he is a Cy Young candidate thanks to his AL-leading 16 wins. Using the more lenient earned-run standard, each of Sabathia's last 15 starts has been quality, and he has gone 12-2 with a 2.45 ERA over that stretch while averaging 7 1/3 innings per start and allowing just five home runs in 110 1/3 innings.

Twenty-four-year-old lefty Luke French, who doesn't really look French, was one of two pitchers acquired by the Mariners for Jarrod Washburn at last year's trading deadline. French has spent most of this season posting solid numbers in Triple-A, and has pitched well in four starts since rejoining the rotation at the beginning of the month (2.93 ERA with an average of just shy of seven innings per start), but he's nothing special, a pitch-to-contact lefty with a high-80s fastball and an alarming fly-ball rate (but just 2.5 homers per fly ball thus far this season) who hasn't struck out more than four men in any of his five starts this year. He threw three innings of garbage-time relief against the Yankees on June 9, allowing a Mark Teixeira home run along the way.