More on Nunez and a Minor League Round-Up

Share All sharing options for: More on Nunez and a Minor League Round-Up 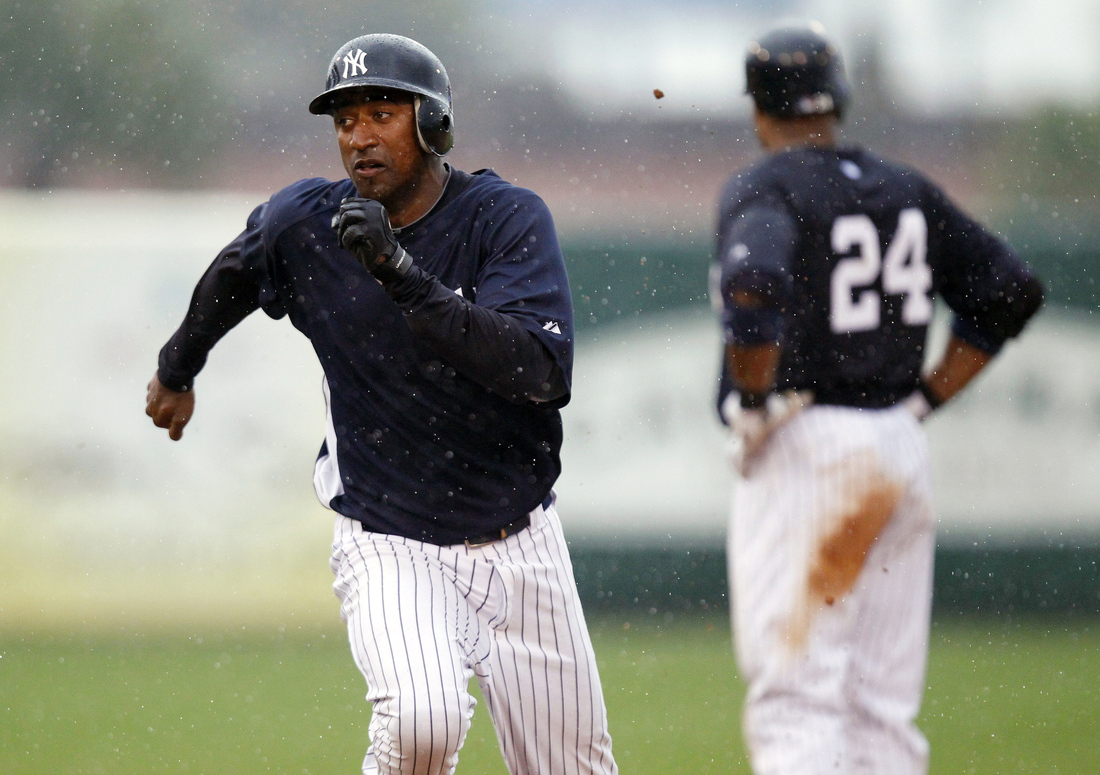 When I last mentioned Eduardo Nunez in this space, he was in the throes of a slump that had brought his average below .300 and also left him lacking in the power and on-base departments. Yesterday, when Lance Berkman’s sprained ankle had not made the progress the Yankees had hoped for, Nunez was summoned for his first taste of big-league brew. However, before I get to why Nunez was given cab fare to the Bronx, let’s examine the two other reasonable options the Yankees had to replace the ailing infielder/designated hitter.

The first option the Bombers had was to put Kevin Russo on the expressway for the third time this season. Russo would provide the team with some utility, capable of filling in around the infield and the outfield corners. The former 20th-round pick has had to prove himself through each stop on the minor-league train, and after blossoming in his first go-around with Triple-A in 2009 (he hit .326/.397/.431), he has regressed this year with a .269/.340/.350 line. Part of this can be attributed to taking nearly two months off to sit on the big-league pine, only cobbling together 48 at-bats after playing regularly in Scranton. It took Russo some time to clear the cobwebs off his bat, as his .220/.270/.237 rates in July can attest, but his bat has shown some life lately, as he has a .289/.349/.368 triple slash in August.

Russo would have been a valuable add to the roster because of his mobility around the diamond, but he was probably kept on the farm to get regular playing time. As he showed with his performance in the rare occasions he did come to the big-league dish (.188/.250/.229), Russo needs more reps to stay locked into his game, not always an easy task for a bench player, especially on a team like the Yankees, where those reps are hard to come by. The West Babylon native has only 308 plate appearances between the majors and minors, so keeping him in Scranton will allow him to reach at least 400 ABs, barring injury (and given Russo’s history, health is not something to be taken for granted).

Juan Miranda was a second alternative to Nunez, though he has less roving ability than either Nunez or Russo. Instead, Miranda would perhaps play first base once or twice, but otherwise be relegated to playing a starring role in Crusher, the first half of a two-part film in which he obliterates northpaws as the Yankee DH while Marcus Thames stars in the second half, with his ability to tattoo the southpaws. He’s riding an 11-game hitting streak and has hit at a blistering .436/.522/.682 clip with five extra-base hits over his last 10 games. As he only has 293 at-bats between the majors and minors this season and isn’t the most glovely of sorts, the 27-year-old Miranda couldn’t satisfy the team’s need for infield depth with Alex Rodriguez temporarily shelved.

And so it was Nunez who got the call. Though he’s still not smacking the ball with much authority (.243/.293/.351 over his last 10 games), he is, at least, hittin’ the ball where they ain’t a little more often. Though he usually sees playing time at shortstop, he has been flipped to the keystone and the hot corner sporadically, so Nunez at least theoretically gives Joe Girardi a second option to playing the light-hitting Ramiro Pena when subbing for A-Rod or giving Derek Jeter an inning or two off of his legs. Russo is more versatile than Nunez, but he is not a shortstop nor as good a hitter.

Like Steve, I am not much of an Eduardo Nunez believer. The 23-year-old’s line at Scranton—.289/.340/.381—translates to just a .245 True Average at the major-league level, not nearly enough cheddar for a shortstop with a solid arm but questionable defensive capabilities. He’s got a modicum of power, but facing better pitching, it is going to be hard for the contact-oriented Nunez to get away with his free-swinging ways and to make hard contact.

We got a mere morsel of Nunez’s play in yesterday’s get-away game against the Tigers when he entered the game after the Yankees declawed the Kitties and four different pitchers in the sixth inning. Giving Derek Jeter some extra shower time, Nunez took over at short and converted all three chances he had to make play, and at the plate, he continued his hacktastic ways by popping up the second pitch he saw (which looked to be a bit inside) to catcher Alex Avila in foul territory.

Berkman shouldn’t be out much longer than the minimum (he was placed on the DL retroactive to August 16) and had made small steps in his recovery, and since the Yankees were apparently unwilling to unleash some Dobermans to test his speed, an extra set of wheels and a bit of bat on the bench is a nice enough temporary patch. Since Nunez is 23, there’s no better time than the present for the Yankees to get a look at a new toy to see what they have and start to envision his future in—or outside—the organization.

• Following Wednesday’s game, 2010 first-rounder Cito Culver, $3 million bonus baby Gary Sanchez, and 2010 third-round pick Rob Segedin were promoted from the Gulf Coast League to Staten Island. Culver, who signed shortly after being drafted, was able to hold his own in the GCL, which is convenient as 2010 second-round pick Angelo Gumbs was ready to make his pro debut at shortstop. Needing to clear some space on the roster for those who signed on or near the August 16 deadline, Culver got bumped to short-season, perhaps with the hope that he could start 2011 in Low-A. Sanchez made his stateside debut and clobbered everything thrown at him (at the plate, anyway), with a .353/.419/.597 line that proved he was ready to be bumped up. Segedin, a Tulane product, had played a whopping two games at GCL before earning his promotion (though he went out with a bang—he hit his first pro homer in his last game). As he is already 21, the move is not surprising.

• Adam Warren, the team’s fourth-round pick from 2009, had put up a string of three “meh” starts prior to Wednesday night, but when he toed the rubber against the Bowie Baysox, he put on a show that would make any fan salivate, going seven innings and allowing two hits. Oh, did I mention that he also struck out 15? Those 15 punchouts broke Trenton’s previous franchise record of 14 (set by Shannon Withem).

• Completing a rather spectacular Wednesday night in the Yankee organization, former Rangers scout and current AOL FanHouse writer Frankie Piliere tweeted this little nugget about Tampa lefty Manny Banuelos. That Banuelos is now hitting 97 on the radar gun is an incredibly exciting development. He does not have a typical starter's frame (5-foot-10, 155 pounds), so there have been questions as to whether he could make it as a starter. Adding ticks to his fastball, entering uncharted territory for him, may be what he needs to help his case to stick as a rotation regular.

• Indispensible Thunder beat writer Mike Ashmore has confirmed that Austin Romine and Corban Joseph are ticketed for the Arizona Fall League. If you aren’t checking out his blog, Thunder Thoughts, you are missing out on a ton of excellent minor-league coverage.

• Here’s a complete list of draft picks that the Yankees signed. I am particularly excited about fourth-rounder Mason Williams and ninth-rounder Tayler Morton.

• I’d like to take a moment to applaud the Yankee organization for bringing back HOPE Week. It is easily one of their best ideas ever.

• Pardon the soapbox moment, but I can’t hold my tongue (or fingers) back. As a woman, I was completely disgusted by ex-major leaguer and current Nationals broadcaster Rob Dibble’s recent comments during a Nationals-Marlins telecast. His remarks quickly reminded me of ex-Met and current SNY broadcaster Keith Hernandez’s comments about a female massage therapist being in the San Diego Padres’ dugout. Though both men apologized for their remarks, it is horrifying for me to watch as these comments fly off the tongues of loose-lipped broadcasters, because these are honest feelings, uncensored and exposed for the world to hear. These are men who are supposed to represent the team they broadcast for and the network they are employed by, but sexist remarks like these do not paint a flattering picture for anyone involved. There has been a great deal of progress as far as acceptance for women in sports, working in sports media, and even being fans of the game, but these thoughts, especially coming from ex-players, show that we are still in the midst of a marathon for equality, and it will be a hard stretch before we cross the finish line.

• And, as usual, if there are some prospects you’d like me to talk about (or any topic in particular), feel free to leave your ideas in the comments or at my Twitter account.