Why I Stayed Home From School Today

Share All sharing options for: Why I Stayed Home From School Today

I spent Wednesday morning at a funeral, spent the rest of the day sulking. I didn't expect to be so affected by the 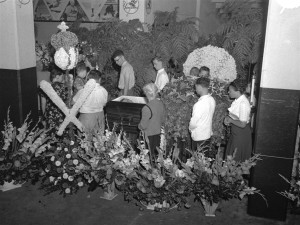 Babe Ruth lies in state at the old Yankee Stadium. He had had some warning. (AP)

funeral, since it was for someone I only knew casually, a colleague of my wife's. Yet, it is difficult to look into an open casket and see someone you had known pleasantly, to watch the real outpouring of grief from friends and family members, and not be moved. This fellow was a vital man, not particularly aged, who was taken by one of those bolts out of the blue. For those of us in less than perfect health, or even for those that are in mint condition, there's a dreadful warning there about what can happen even if you do your best to take care of yourself. It doesn't have to be something dramatic like a tree falling on you that ends things. Sometimes a part that seems like it was working just fine fails on you, and you're gone. This man's loved ones were not just in mourning but in shock. I've led a sheltered life, I guess, as I'd never seen that before.

The evening's baseball activities seemed hollow to me. I'll get over it by the time today's ballgame is over, I suppose. Until then, these two notes:

1. I hope that Joe Girardi maintains something like the current batting order even after Alex Rodriguez comes back; the offense hasn't looked this vital in weeks. He can't and won't, because of Derek Jeter. If you keep Robinson Cano hitting fourth, then Rodriguez has to hit fifth, which bumps Nick Swisher, who is having a better year, down to sixth. He could avoid this by going back to batting Swisher second, but then Jeter either has to drop well down in the order or go back to hitting leadoff. As we all know, Jeter isn't dropping in the order.

2. Terribly disappointed by the news about Andy Pettitte, who seemed to be making himself an interesting Hall of Fame candidate by adding one more great year to his record. Now we don't know if he will even get to finish the season. With each Dustin Moseley (ERA now about 2/3 of a run above the league average) start, I grow more desperate to know how the Cliff Lee trade got derailed, whether the Yankees were in on Dan Haren, and why they apparently weren't in on Ted Lilly... or anyone.