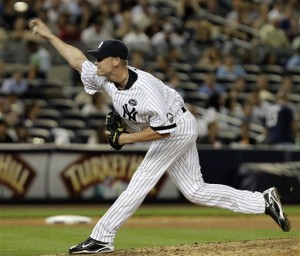 Though they've looked better the past two nights in beating the Tigers, the Yankees are a sluggish 18-14 since the All-Star break, locked into a tie with the Rays atop the AL East after holding sole possession of first place for seven weeks. Their second-half struggles are rooted in a rotation that's less than whole and underperforming during that span, as well as a listless offense that can't find its cue even after receiving moderate upgrades. Yet amid those units' woes, their bullpen has quietly rounded into a shape befitting a viable contender.

The Yanks spent the first half of the season largely fumbling for the right combination of relievers in front of Mariano Rivera, who's been as remarkable as ever at the age of 40. Joba Chamberlain didn't have much to pump his fist about as he struggled to assert a claim on the eighth inning setup role. David Robertson looked like a nervous teenager on a first date instead of a seasoned October veteran. Chan Ho Park showed that without a scruffy beard or a locker at Chavez Ravine, his superpowers were completely neutralized. Alfredo Aceves hit the disabled list due to back woes. Chad Gaudin… well, he pitched like the second coming of Chad Gaudin. Damaso Marte faked a shoulder injury and took up residence in the south of France, just as he did last summer.

The result was a bullpen that ranked in the middle of the pack according to a pair of Baseball Prospectus' key metrics designed do a better job of measuring reliever performance than traditional ERA, not to mention the execrable holds statistic. WXRL (reliever expected wins added) incrementally credits and debits every reliever with a fraction of a win based upon the game state in which he enters — inning, out, runners on base, relative score — and when he departs. A reliever who allows a run in the eighth inning of a one-run game has done more to cost his team a chance at winning than a reliever who yields one in the sixth inning of a blowout. Fair Run Average is a pitcher's runs allowed (earned and unearned) per nine innings, adjusted for inherited and bequeathed baserunners and the number of outs; a pitcher who departs with a man on first base and two outs is charged with a smaller fraction of a run than one who fleees with a man on second and nobody out.

The Yankees ranked ninth in the league with 2.7 WXRL in the first half, 4.8 wins behind the Rays; with a better bullpen performance, they'd have built themselves a bigger cushion atop the standings. They were a slightly better seventh in reliever Fair Run Average at 4.30; the Twins paced the Junior Circuit with a 3.22 mark.

Since the All-Star break, however, the Yankees have been tops in the league in both categories, with 3.6 WXRL and a 2.42 FRA. All stats through Monday:

* "First Half" stats with Cleveland through July 31

With the exception of Rivera, every Yankee reliever of any substance has been more valuable (in terms of wins) in the second half than in the first despite the much smaller number of games. Four key relievers (Mo, Roberston, Logan and Wood) have FRAs below 2.00 since the break; Robertson's is actually negative, which can happen when a pitcher not only hasn't allowed a run but has improved the situation for the people in front of him. Chamberlain is much improved, though he rarely provides a smooth ride. Mitre's provided good middle relief innings to cover for the starters' averaging half an inning per start less in the second half (6.3 to 5.8). Park is now a Pirate, free to wreak his special brand of havoc elsewhere.

Of course, these are small samples. Hell, a single 60-inning season for a reliever is a small sample, which is why using one year's numbers to guide the assembly of a quality bullpen the next year is so damn hard; managers and GMs can overreact to small sample sizes and quickly bury a pitcher who's not going well. Joe Girardi, to his credit, didn't do that with Chamberlain, Robertson and Logan when they were tattooed early in the season, not that he had much of a choice; it wasn't as though Brian Cashman could suddenly phone 1998 and summon Jeff Nelson and Mike Stanton. As in years past, Girardi's sifted through his options, some less heralded than others, and found a combination that's started to click.

Logan is particularly interesting. As a White Sock, he made the jump from High-A to the majors at the tender age of 21, and while he yo-yoed up and down between Chicago and then Atlanta and Triple-A and grew one of the most unsightly beards you'll ever see, he never found much success. Coming into the year, he owned a 5.78 career ERA due mainly to his gopher ball tendencies (1.2 per nine). He'd been cuffed around to a fair degree by lefties (.266/.333/.398 in 289 PA), and absolutely tarred and feathered by righties (.325/.400/.509 in 309 PA). This year, lefties are hitting just .174/.269/.217 against him in 52 PA, and they're just 1-for-21 with no walks since the break; righties are roughing him up (.271/.358/.424 in 67 PA) but not to the same degree as before, and they're just 3-for-14 against him since the break. Overall, he's got an 11/1 strikeout-to-unintentional-walk ratio in the second half, compared to 13/9 in the first, and is pitching with the air of a guy who's finally emerging as a viable major leaguer. In any event, with Marte still in the Pyrenées (or on the disabled list), Logan's likely the bullpen's sole lefty until rosters expand in September.

Wood, who was acquired from the Indians at the deadline, is another key. The former Cubs phenom is more than a decade removed from his tantalizing 1998 rookie season, which included a 20-strikeout performance but ended with a Tommy John surgery. He was nursed through a handful of fairly effective seasons before a litany of further arm injuries limited him to just 36 starts from 2004-2006. In his late 2007 return, he shifted to the bullpen, and spent a couple of rocky years closing while making considerable coin, first in Chicago, then in Cleveland.

Wood missed the first month of this season due to a strained lat, yielded 12 runs in his first 11.1 innings, and was only starting to find a groove before blisters sidelined him in mid-July. He's whiffed 23 and walked 10 while allowing just four runs in 18 2/3 innings dating back to June 10; batters are hitting just .217/.333/.304 in that span. Cliff tried to compare him to Kyle Farnsworth during our initial video session, but when healthy — which he only is for stretches at a time — Wood's a much better pitcher than old Farny, still capable of providing the occasional jolt of electricity he fleetingly harnessed at a young age. If he keeps missing bats, he'll help the Yankees.

Nearly three-quarters of the way through the season, the Yankees finally appear to have a fully functioning bullpen. Marte, who's rehabbing and was actually spotted on the bench recently, and Aceves, whose rehab is going well, will provide further reinforcement in the hopes of molding a unit that can serve the Yankees well deep into October.