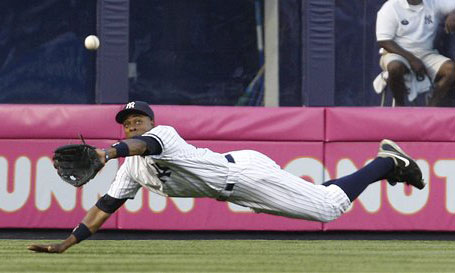 With Austin Jackson and the Tigers in town this week, there are a lot of Yankee fans itching to call the three-team deal that sent Jackson to Detroit and made Curtis Granderson a Yankee a bust. After all, looking at the three players the Yankees gave up in the deal, Jackson is a Rookie of the Year candidate, Ian Kennedy has been a reliable mid-rotation starter for the Diamondbacks, and Phil Coke has arguably been the Tigers’ best reliever this season. Granderson, meanwhile, spent a month on the disabled list with a groin pull, and with the exception of intended back-up catcher Francisco Cervelli, has been the Yankees worst every-day player this season.

Such a pronouncement is, of course, absurdly premature. Even for the win-now Yankees, the Granderson trade was intended as a long-term or at least-multi-year upgrade, in the Yankees’ case going from the defensively challenged 36-year-old Johnny Damon, coincidentally now also a Tiger, to the spry 29-year-old Granderson who arrived bearing a relatively inexpensive contract good through 2012 with an option for 2013.

For a lesson on patience, consider the last three-team deal involving the Yankees and Tigers. The June 2002 trade that brought Jeff Weaver to the Bronx was indeed a bust for the Yankees. That became clear before the end of the 2003 season, but exactly who won that trade, or even who the best player in that trade was, changes depending on where, or rather when, you draw your line of decision.

By 2004, the Yankees had already given on up Weaver, flipping him to the Dodgers for human Fabergé egg Kevin Brown. The A’s, the third team in the deal, had similarly flipped lefty Ted Lilly, acquired from the Yankees, to the Blue Jays for switch-hitting outfielder Bobby Kielty. The Tigers, meanwhile, got 27 home runs from first baseman Carlos Peña that season and 11 wins from 21-year-old righthander Jeremy Bonderman, both of whom had come over from the A’s in the swap.

Two years later, Bonderman was a rotation staple for the first pennant-winning Tigers team in 22 years, but Peña had been released that March and spent the 2006 season passing through the Yankees’ and Red Sox’s minor league systems, starting just nine major league games all year. Meanwhile, the winning pitcher in the decisive game of the World Series, eliminating Bonderman’s Tigers, was none other than Jeff Weaver, who struck out nine men in eight strong innings in that game and seemed to have a shot at reviving his career under Cardinals pitching coach Dave Duncan.

Entering the 2007 season, Bonderman still seemed like the top player involved in the deal. Consider his glowing player comment in that year’s Baseball Prospectus annual (accompanied by a headshot on the front cover labeling him a "Cy Young contender"):

Bonderman is as good a bet as any pitcher in the American League to win a Cy Young Award, provided that Johan Santana gets hit by a bus or something. His peripherals last year pointed toward an ERA in the low 3.00s, and opponents hit just .169 against his deadly slider, remarkable for a pitch that he throws as often as one third of the time. He`s young, healthy, has been handled carefully, and his trends are improving . . . natural maturation combined with some good luck should make him a very good pitcher for a very long time.

A bum elbow soured Bonderman’s 2007 season, and the subsequent discovery of thoracic outlet compression syndrome effecting the nerves and blood flow to his pitching arm derailed his career entirely the next year. Bonderman made just 13 total starts between the 2008 and 2009 seasons, and though he has been ostensibly healthy this season, he has posted a 6.79 ERA over his last nine starts entering tonight’s game with just two quality starts among those nine, one of which came after he was skipped in the rotation four turns ago.

Last year, two players involved in the initial three-team trade made the All-Star game. They were, naturally, Carlos Peña and Ted Lilly. Peña made the Rays as a non-roster invitee in 2007 and has hit .244/.373/.530 with 139 homers in the three-plus season since, and Lilly has emerged as a reliably above-average starter since signing a big four-year deal with the Cubs prior to the 2007 season.

So more than eight years later, who has proven to be the best player the deal that sent Weaver from Detroit to New York, Lilly and minor leaguers John-Ford Griffin and Jason Arnold from the Yankees to the A’s, and Peña, Bonderman, and reliever Franklyn German to the Tigers? Here’s what Baseball Prospectus’s WARP (wins above replacement player, a total-production statistic that includes hitting, fielding, and pitching) has to say:

As for who “won” the trade, I suppose you still have to give it to the Tigers, who did pick up a pennant with Bonderman as a key contributor, got more out of Bonderman, Peña, and German than the Yankees or A’s got out of the other four players combined, gave up effectively nothing for that production, and who are the only of the three teams team still employing a player acquired in this deal. Still, even that verdict took a while to come in as the Tigers’ won that pennant more than four years after this deal went down.

With Granderson under contract for another two and possibly three years (with the option), and Jackson, Kennedy, and Coke (not to mention Max Scherzer and reliever Daniel Schlereth, who went from the Diamondbacks to the Tigers), still in their pre-arbitration years and thus the property of their new teams for even longer than Granderson, we are years away from being able to pick a winner in the more recent three-way involving the Yankees and Tigers.

Right now, I’m not overwhelmed with remorse about the loss of Jackson. Yes, he’s hitting .302 as a 23-year-old rookie, but he’s also leading the American League in strikeouts without the additional benefit of power. His home run to lead off Tuesday night’s game was just his second in the majors in 481 plate appearances. His isolated power (batting average minus slugging percentage) is just .103 against a major league average of .146, and his walk rate is similarly uninspiring (one unintentional walk every 15.0 PA against a major league average of 12.7 PA/UIBB). This is almost exactly what the Yankees saw from Jackson at Triple-A last year (.300/.354/.405 vs. his current .302/.354/.405), which is to say, a lot of empty batting average.

When the Yankees drafted Jackson, he had accepted a scholarship to Georgia Tech, where he planned to play both baseball and basketball. The Yankees paid Jackson $800,000 to commit to them and to baseball, then set about trying to turn the athletic teenager into a polished baseball player. Jackson took a huge leap forward in late 2007 when his Sally League hitting coach, Greg Colbrunn, rebuilt his swing. Jackson hit .345/.398/.566 for High-A Tampa in the second half of that season, but he has been regressing since. His walk rate has been dropping, his strikeout rate has been climbing, and that bit of power he showed in Tampa (ten homers in 284 PA) has faded.

The Yankees, and many prospect watchers, thought Jackson needed at least another half season at Triple-A this year, but the Tigers, partially out of desperation, made him their Opening Day center fielder. Jackson burst out of the gate, hitting .371/.420/.508 (still mostly batting average) through May 9, but slumped hard after that and has hit just .272/.325/.362 in 338 plate appearances since. The line on the trade when it went down was that Granderson represented the best-case-scenario of Jackson’s future (something of a Torii Hunter-type, a 20/20 player with solid but overrated defense and a lot of strikeouts), but Jackson’s performance thus far this season has raised at least as many concerns about his ability to fulfill that potential, particularly in the power department, as it has quelled.

As for the other two players the Yankees gave up, Phil Coke was a peripheral player in the deal, one deemed expendable by the Yankees for a variety of reasons: his age (now 28), the organization’s pitching depth, Coke’s unsustainable .218 opponents’ batting average on balls in play in his season-plus as a Yankee, and his propensity for giving up the longball. Coke’s BABIP has indeed corrected itself this year (to .324), but after giving up ten home runs in 60 innings last year, he has allowed just one in 50 frames this year. That last, the product of a 1.3 percent rate of fly balls leaving the park, is utterly unsustainable and false comfort coming from an extreme fly-ball pitcher such as Coke. As for Kennedy, he could wind up being the Ted Lilly of this deal, but he has had his struggles this season as well, posting a 5.94 ERA over his last 11 starts and showing some alarming fly-ball tendencies of his own.

Getting back to Granderson, not only hasn’t he completed a full season with the Yankees yet, but he lost one of the four months he has spent in pinstripes to a minor injury. Thus far it appears his defense has rebounded, but his bat, particularly against left-handed pitching, hasn’t. He has undoubtedly been a disappointment thus far, but the early returns on Kevin Long’s fixes to Granderson’s swing have been very positive (8-for-23, a .348 average, with half of those hits going for extra bases including a pair of homers and just three strikeouts against three walks).

Granderson doesn’t have to return to his 2007 heights to be an asset to this team, though it would be nice if he could do something on the level of his 2008 season (.280/.365/.494). Of course, the selling point on the trade was “tomorrow’s Austin Jackson today!” not “yesterday’s Curtis Granderson tomorrow!” I certainly understand the frustration Yankee fans feel over the deal at the moment, but, frustrating though it may be, it makes no more sense to call the trade a bust less than a season later than it does to call Long’s fixes a success after less than 30 plate appearances. If Austin Jackson is a star in 2013 and Curtis Granderson is an ex-Yankee who never won a ring, then you can complain, but not while Granderson is on a Yankee team that has the best record in baseball and Jackson is making like a slower Juan Pierre.