To the Mats with Reader Comments

Share All sharing options for: To the Mats with Reader Comments

To The Mats With Reader Comments

New site, new crew, but we can always count on some grumpy readers. Let’s argue. 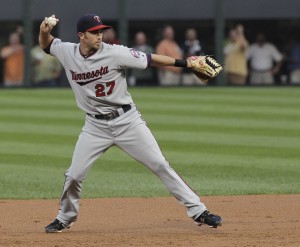 J.J. Hardy: Could he step into Derek Jeter's shoes? (AP)

You can dissect this any way you want, the fact remains that Alex got the hit or Sacrifice Fly when it was needed. Funny if Jeter hits a sac fly he is a well rounded player. Alex does it and you want to change the rules and look at it as an out. Pathetic, absolutely pathetic article.

See what I mean?

BigBB, I’m not changing any rules. For accounting purposes, a sacrifice fly isn’t counted against a player’s batting average. It is, however, an out, not a hit, regardless of how it is counted for the player. In practical terms, it is no different than a groundout that scores a run. Parenthetically, the sacrifice fly rule has changed from time to time. The sac fly didn’t exist until 1908. In 1926, the batter was credited with a sac fly whenever a runner advanced, not just if someone scored. From 1931 to 1938, sac flies counted against batting average. The current rule has only been in place since 1954. However baseball counts it, a fly out is a fly out is a fly out. It’s an out for the team, one of just 27 that they get. It is entirely preferable that with a runner on third and one out, the batter get a hit, not make an out.

The fact is that at the time I wrote the entry on A-Rod to which you responded, for baseball’s purpose of figuring batting averages, and that purpose only, he was hitting .292 with runners in scoring position. In real terms, in the only way that matters to the Yankees, he was hitting only .273. Resorting to RBIs and clutch-hitting stats to try to argue that Rodriguez hasn’t had a bad season by his own standards is a reach. The RBIs are as much a matter of opportunity as anything else, especially those league-leading eight sacrifice flies.

It’s not Damon and Matsui that I’m upset about, it’s Austin Jackson. They traded this year’s rookie of the year for a guy who now needs a late-season hot streak to finish at .250 with 20 home runs. I understand the thinking that went into this decision–the Yankees didn’t want to take the risk of having two outfielders, both of whom possess excellent speed and defensive skills but almost no power, neither of whom might be ready to be full-time major leaguers. Unfortunately, both of them were.

Your colleague recently made the brilliant observation that Jackson recently batted “only” .293 during a recent Tigers winning streak. That still leaves him higher than Posada, Jeter, ARod, Gardner, and, most importantly, Granderson. Granted, AJ’s OBP is not that impressive, but Granderson’s numbers are downright horrible, he is completely incapable of hitting against lefties, and his defense is debatable. Jackson was recently rated the best defensive Centerfielder in baseball. to top it all off, the Yankees also gave up a solid reliever and a solid 4th or 5th starter in the deal. I won’t be doing any crying over the loss of Kennedy or Coke, but if the Yankees were going to deal them they could have gotten a lot more than a platoon outfielder who bats seventh or eighth out of it.

As Cliff is going to discuss in an upcoming entry, it is premature to judge the trade. Even if you choose to do so, please, please don’t overrate a .302 batting average. Batting average isn’t the only thing, although with Jackson it is—which is to say that his total offense is pretty well measured by that one statistic. He has one home run and 33 walks. He has also had tremendous luck. I said this in April when he was hitting .360 and it’s still true: Jackson is not going to maintain a .420 batting average on balls in play indefinitely. Some of those singles are going to stop falling in, and when they do, that batting average will drop and he will have to fall back on his other skills, which so far have yet to manifest. By the by, since that hot April, Jackson has hit .284/.335/.372, which is solidly in fourth outfielder territory and nothing to envy. For all his struggles, Granderson isn’t that far behind Jackson. The former’s True Average is .262, the latter’s .279.

I’ll let Cliff handle the rest of the argument in his forthcoming post on the trade.

3: He Can Be a Fixture, Like the Empire State Building, and Pigeons Can Roost on His Mighty Shoulders

I would def sign Jeter for another 4 or 5 years, but it would be at a reduced cost and a lower spot in the batting order. If his name wasn’t Jeter, he would be batting last. And we thought batting him first would reduce the number of DP’s he hit into. Funny.

I’m confused. Jeter is 36, having his worst season with the bat, and his glove, never great, is only going to further atrophy. Yet, you would bring him back for his age-37 through age-41 season? It’s hard to imagine anyone disliking Jeter so much that they would want to see him humiliate himself that way. First, you’re asking him to play a top defensive position in his 40s, something only three players before him have done over the course of a full season—Honus Wagner, Luke Appling, and Omar Vizquel. Second, if he can’t do it now, what are the chances he can do it then? Third, for him to support an offensive position other than shortstop, his bat would have to rebound to something around his career norms. It could happen—he bounced back after 2008—but it will get less likely with each passing year, if it happens at all.

That’s why the Yankees have a tough decision to make. If Jeter’s agent says, “You gave Mariano three years starting at 38 and Jorge four years starting at 36. We want four years too,” the Yankees really shouldn’t say yes, because they’re very likely to be paying two shortstops before the ink is dry. Nor should the Yankees let 3,000 hits overly influence their decision; I suspect that they will make more money with a World Series team than they will from a loser that is carrying a weak player trying to chase personal statistics. Think of Pete Rose, well past it, writing his name into the lineup card every day so he break Ty Cobb’s record. Craig Biggio was a great player in his prime but was a replacement-level player by the time he got to 3,000.  Those records were altars to vanity, not monuments to greatness.

To go one step further, one Babe Ruth was too fat to play the outfield, he was let go. When Lou Gehrig couldn’t play anymore, no matter the reason, he had to sit down. When Joe DiMaggio read what opposing scouts were saying about his fielding, he retired. I don’t know if Jeter is done or not, but bringing him back for more than a year or two at most makes it likely that he will be around long past his expiration date.

4: Now You're Just Baiting Me

Steve, I agree with everything you said, but I’ll bet you are still a big Barack Hamas Obama supporter, and believe he is doing a great job! Would you give him another 4 year contract?

Depends on the choices. I was never a big fan, but I liked him better than any possible alternative that was offered. Even my low expectations have been dashed, however, due to a simply abysmal record on jobs creation. Anyway, I’m keeping politics out of this site. When I have something political to say, I’ll write it up at Wholesome Reading, from which I have been taking an enforced break. I’ve not only been too busy with family and baseball matters, I’ve been too disgusted.

As with the choice of who to vote for, moving on from Jeter depends a great deal on possible alternatives. The Yankees don’t have one now (not an Eduardo Nunez believer), but consider someone like J.J. Hardy, who may be available this winter. Hardy, 27, is not a great glove, but is better than Jeter. He hit 26 and 24 home runs in 2007 and 2008, respectively. Last year was a disaster and the first half of this one was eaten up by injuries, but since getting healthy in early July he’s hit .333/.369/.486 (33 games). Not saying he would be my choice, but he may be a choice. Say you can get a Hardy for four years, ages 28 to 31, and by then maybe Cito Culver or some other player will have emerged as the shortstop of the future (not really confident about that, either). I'd think you'd have to give it strong consideration, because even if you do bring Jeter back, you may need to dip back into the well in a very short period of time, and there's no telling who will be available then.