I've said it before and I'll say it again: it is all too easy to take shots at Brian Cashman and 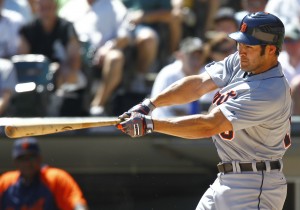 the Yankees for making the choice they did in opting to let Johnny Damon and Hideki Matsui leave after last season. Yes, the team gambled on Nick Johnson's constitution and lost, but that's hardly the whole story, and to say it was a straight either-or decision is a deceptive oversimplification.

Put yourself in their shoes. Think about your current job. Annual review time comes around and your boss comes to you and says, "Look, Ralphie, we like you and all, and we want you to stay around, but we don't feel you're quite as valuable as you used to be so we're going to be giving you a 40 percent paycut." The first thing you're going to do is take the elevator to the street, punch up your wife or girlfriend on the phone, and say a whole lot of stuff that I can't print on a family website.

The phone beeps as you're cursing and ranting. It's your company's competitor, Acme Widgets. They say, "Ralphie, we love you. We think you could really add a lot to our organization and we'd be heartbroken if you don't come over and favor us with your brilliance." You're excited, but times are tough, and Acme can only afford the same reduced salary that you were just offered. What are you going to do, stay at your current job and feel bitter that they cut you, or go take the job with the people who say they want you, even if the money is the same? If you stay, you're going to be bitter and discontented. Heck, even your current boss knows that, which is why he's secretly hoping you don't accept the pay cut and quit. That's the position the Yankees were in with Matsui and Damon. Even if there was a good argument for keeping either of them, they were spectacularly unlikely to accept market value from the Yankees given how far the market had sunk since they signed those contracts.

What we can argue a bit more reasonably is that the Yankees should have thought bigger, better, and healthier at DH than Nick Johnson, but that's a story for another day. In the meantime, the loss of Nick the Greenstick hasn't damaged the Yankees too badly. The mix at DH, even with the early miserable showing by Johnson and the late miserable showing by Lance Berkman, has hit .255/.354/.443, which is well above average for the position this year. It's not David Ortiz or Jim Thome, but it's not Seattle either (an incredible .184/.257/.300 from their designated "hitters").

Meanwhile, Matsui has been mediocre and Damon has been good, not great. Normally, you wouldn't make a big deal about letting a player with these numbers go, but Damon was very popular. In other words, dragging out the Yankees "mistake" is just pandering.