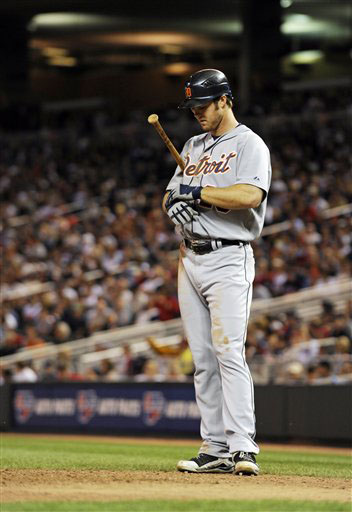 Brennan Boesch trying to warm up his bat (AP)

So much for the Tigers. On July 10 they were in first place by a half game and 11 games over .500. Since then, they have gone 9-23 (.281) to fall to third place, 10.5 games out of first and three games below .500, effectively eliminating themselves from contention. Even after taking two out of three from the second-place White Sox this past weekend, they're still 7.5 games behind Chicago.

Over the first 31 games of their collapse, the Tigers averaged just 3.13 runs per game, a figure which got a boost with their 13-run outburst against the White Sox on Sunday (though it's worth noting that, even in that game, Boesch went 0-for-3 and was pinch-hit for in the seventh inning). The Tigers do enter this week's series in the Bronx having won three of their last four, but two of those wins came by 3-2 scores in well-pitched games by Justin Verlander and Rick Porcello, and they were trailing entering the eighth inning of Sunday's 13-8 win over the Chisox.

As for the Yankees, they haven't won a series since taking three of four from the lowly Indians at the end of July, though I tend to think reports of their offensive slump are a bit premature. The Yankees haven't gone three games without scoring at least five runs since June 30 to July 1, though it's also true that they haven't scored more than three runs in a loss since August 2.

Acquired from the Diamondbacks effectively for Edwin Jackson in the three-team Curtis Granderson trade, Scherzer struggled early in the season, but over his last ten starts he has posted a 1.92 ERA while striking out 8.4 men per nine innings. Not that it's done him much good in the wake of the Tigers' offensive collapse. The good news for the Yankees is that Scherzer's best work, and the bulk of his work (six of those last ten starts), has come at home. The bad news is that Vazquez has a 6.43 ERA, seven home runs allowed, and just 15 strikeouts in 28 innings over his last five starts. The Yankees eased up on Vazquez's between-start routine this past weekend in the hope that he would be stronger for this start and thus regain some velocity on his fastball.

This will be Sabathia's fourth start against the Tigers as a Yankee, and each has pitted him against Verlander. Thus far Verlander holds a 2-1 advantage in the series, but Verlander's two wins both came early in the season, when Sabathia tends to struggle.  Verlander and the Tigers beat the Yankees and Sabathia soundly on May 13, but CC has gone 11-2 with a 2.44 ERA in 14 starts since June 3. Verlander has pitched well of late, too, but his 3.15 ERA over his last eight starts isn't quite up to Sabathia's standard.

In his last two starts, Moseley has turned in a last-minute quality start against the Red Sox and a near-disaster start (4 1/3 IP, 4 R) against the Royals. Unfortunately, the latter looks more like the real Dustin Moseley. Fortunately, his opponent is Bonderman, who has a 6.92 ERA with eight home runs allowed over his last seven starts and hasn't shown any lasting improvement since being skipped in the rotation four turns ago.

Jay pretty much has Hughes covered, so I'll just add here that Hughes has posted a 3.77 ERA over his last last five starts, each of them pitched on regular rest, and has allowed just two home runs in his last four starts (23 1/3 innings) and one in his last three (17 1/3 IP). Twenty-one-year-old Morristown, New Jersey native Rick Porcello has four quality starts in six turns and a 4.42 ERA since returning from a month in the minors and only one of those six starts has been a disaster. That came against the White Sox three turns ago and he got revenge on the Pale Hose in his last outing, twirling seven innings of two-run ball. Sabathia-Verlander is obviously the top pitching matchup in this series, but this duel of maturing young prospects is compelling in its own way.