Jorge Posada is aching. Francisco Cervelli is slumping. Chad Moeller is... still the Moelman. With the Yankees' catching situation such a mess, it's become fashionable to clamor for the recall of top prospect Jesus Montero to serve as the team's backup catcher down the stretch. Unfortunately, it's not a very realistic proposition.

Posada's been dealing with injuries all season, and he's showing the kind of wear and tear you'd expect of a catcher who turns 39 on Tuesday. He served a DL stint in late May due to a foul ball-induced hairline fracture in his foot — a freak injury, admittedly — and lately has been dealing with a cyst behind his left knee and soreness in his surgically repaired right shoulder. He's started just 16 of 29 games as the team's catcher since the All-Star break, and actually trails Cervelli in starts for the year, 61-52. Manager Joe Girardi's latest plan involves having Posada catch three out of every five games and garnering additional playing time at DH while Cervelli catches the other two. 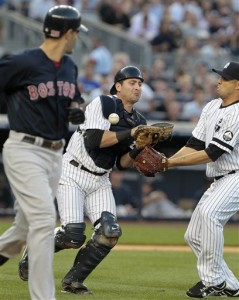 The Cisco Kid can't do much right these days (AP).

That wouldn't be such a problem if Cervelli were actually productive, but after hitting like Joe Mauer Lite through May (.320/.388/.400), the Cisco Kid's batting just .186/.256/.229 since. Only four major leaguers with at least 100 plate appearances since June 1 have lower OPSes in that span: Jeff Mathis, Rod Barajas, Don Kelly and Ruben Tejada. That's not good company , and it certainly doesn't say nice things about the Mets. You can understand why Cervelli's "hitting" has Yankee fans pulling out their hair in fist-sized clumps.

Add to that the fact that Cervelli's made a few facepalmworthy defensive gaffes in recent days. His drop of a Mike Lowell popup led to three unearned runs in a recent loss to the Red Sox, and on Sunday he made one throwing error on a stolen base that led to the game's only run, then another on a Little League-caliber airmail into left field on a play he was backing up, though runner Gregor Blanco wound up stranded at third.

Still, in the grand scheme of things, the Yank catching corps' combined performance (251/.338/.385) has been the fifth most productive in the league according to OPS, and second in OBP, the most important of the three triple-slash component. Furthermore, Cervelli hasn't been a bad backup by the low standards of the Posada era. Consider the competition (50 plate appearance minimum):

Believe it or not, the case for the best backup of the Posada era belongs to Flash Flaherty, who despite his resistance to taking a walk could occasionally jerk a fastball out of the park. Cervelli's 2009 and 2010 seasons both are in the upper half of this motley crew, though his current season is dropping by the day. By the time this season's done, he'll be as overexposed as Mel Gibson's bad manners, and will likely have accumulated more plate appearances than any of these players, including Molina in 2008, the year Posada was lost for the season in late July.

Montero, meanwhile, is flat-out raking at Triple-A Scranton/Wilks-Barre. The 20-year-old got off to a slow start this year, hitting just .229/.309/.357 through the end of May, but lately he's caught fire, hitting .327/.397/.593 since the beginning of June; last week, Scranton Times-Tribune beat writer Donnie Collins likened his confidence in walking to the plate to that of John Travolta in the first scene of Saturday Night Fever. Bad ass.

Prospect experts are in agreement that Montero's bat is special; Fanhouse's Frankie Piliere likened his upside to that of Miguel Cabrera, while ESPN's Keith Law recently reiterated his preseason comparison to none other than the Big Hurt: "Physically and in his swing, he reminds me of Frank Thomas. And I know that's an insane comp to put on a guy, but I don't think that's out of the question as an optimistic long-term projection."

Given the opportunity, it's quite possible Montero's bat could help the Yankees this year; his Triple-A performance translates to a .280 True Average (as Uncle Steve may have explained somewhere along the way, that's a Baseball Prospectus stat, formerly known as Equivalent Average, which expresses runs created per plate appearance on the scale of batting average while building in park and league adjustments. A .260 mark is defined as average. That's just a few points under what Posada (.284) and Alex Rodriguez (.282) are providing this year as they're showing their ages. He's a real stick.

The problem is Montero's defense. While Law complimented his arm strength and his improved accuracy, Montero's thrown out only 23 percent of base thieves, this year. Admittedly, that's better than both Cervelli (17 percent) and Posada (16 percent) but well below the major league average of 28 percent. More damning is the fact that runners have still managed one steal per game against him, suggesting they're not shy about testing his arm. Worse, he has 14 passed balls; no other catcher in the International League or the majors has more than nine. In his preseason Top 11 list, my Baseball Prospectus colleague Kevin Goldstein called Montero "a well below-average catcher" whose "big, thick build doesn't provide much agility defensively." In a more recent assessment of Montero's progress via Twitter, he was brutally blunt: "Bad receiver, doesn't block well, bad vs running game." Could he handle 40 percent of the current catching load? "No." Other than that, how was the play, Mrs. Lincoln?

There are doubts as to whether he'll be able to stay at the position long term. Law is concerned about his size: "[Montero is] a guy who is listed at 6'4", 225, and is likely heavier than that is massive for a catcher. He'd be heavier than any catcher in the majors, I believe, and taller than all but [Joe] Mauer, Chris Snyder, and [Jarrod] Saltalamacchia — none of whom is a paragon of health." Our own Stephani Bee will have more on Montero's future later this week, but suffice it to say, that future's not now, at least not behind the plate.

With the non-waiver trading deadine having passed, the Yankees don't have any easy options for an upgrade available to them. With the best record in the majors, they've vulnerable to being blocked before getting the chance to claim any catcher of substance put on waivers; why should Boston or Tampa Bay let (for example) the Blue Jays' John Buck or even Jose Molina get to them when they can just put in a claim?

Down on the farm looms Moeller, who's defensively sound but utterly without upside as a hitter, with a career .226/.288/.351 line in the majors. He can join the club in September when the rosters expand, and might even worm his way onto the postseason roster if Cervelli doesn't improve.

In the interim, the best solution available to the Yankees may be to adhere to more of a strict platoon behind the plate. Cervelli's hit just .237/.282/.305 in 242 career PA against righties, but .304/.372/.363 in 86 PA against lefties; sure, it's a small sample size, but it is at least consistent with his minor league track record. Girardi could start Posada against righties while Lance Berkman serves as the designated hitter, then start Cervelli against the lefties, with Posada DHing and Berkman (.216/.288/.373 against southpaws in 2009-2010) sitting. While opposing lefty starters may not be as evenly spaced as an ideal two-in-five rate — the Yankees faced four in a row last week after facing one in the previous 16 games — they should be able to at least cut down the number of starts in which the 'Cisco Kid flails against righties.