Where Has All the Hitting Gone, Long Time Passing?

Share All sharing options for: Where Has All the Hitting Gone, Long Time Passing?

Bryan Bullington? It’s hard to believe. Now, we don’t want to overreact to the random grace that sometimes attaches itself to even the most journeyman of pitchers. Think of 1940, when an obscure right-hander named Johnny Babich, pitching for the A’s, went 5-1 with a 2.08 ERA against the Yankees, including a September 27 win that eliminated the Yankees from the race. "Babich? Babich? Who the hell is Johnny Babich?" manager Joe McCarthy ranted after the game, and we can hardly blame him for being so vexed. Yet in his calmer moments, he no doubt reflected and realized that sometimes there are days when scrub hurlers can have, if not the stuff of a Walter Johnson, at least his results, and that he had seen it himself on occasion with his own pitchers. 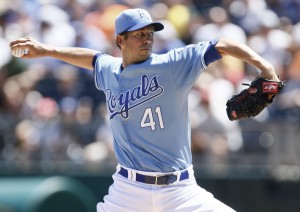 Those excuses having been made, let us say, a la McCarthy, "Bullington? Bullington? Who the hell is Bryan Bullington?" If you didn’t know that the Yankees led the league in runs scored per game by a good margin, in on-base percentage, in adjusted OPS if you care about such things, you might not have guessed that it was the case. The Yankees are now 6-8 in August. Going into Sunday’s game, they were hitting .256/.313/.416 for the month, and given that they went 2-for-27 with one walk today, those numbers have dropped. Runs per game have dropped to 3.9 during that period, a number more reflective of the Indians and the A’s than the Yankees.

We’re talking about only two bad weeks in a much longer season, so panic isn’t exactly called for. As recently as last month, the Yankees averaged nearly six runs a game. Yet, it does seem odd that in the two weeks between July 29, when they scored 11 runs against Cleveland, and Saturday, when (thanks to Alex Rodriguez’s home run barrage) they scored eight, the club as a whole had a .292 on-base percentage. You know these professional hitters are going to wake up, but when? When one sees this normally patient team swinging at Bullington’s first and second pitches (and Bullington ain’t a Cliff Lee-level control artist) one despairs. The Yankees played as if they were eager to get to the airport and go home—the game lasted all of 2:07, unheard of for the Yankees. You know this team is more professional than that, so the only conclusion is that it’s not that they weren’t up for the game, it’s that they are, as a group, really, really screwed up.